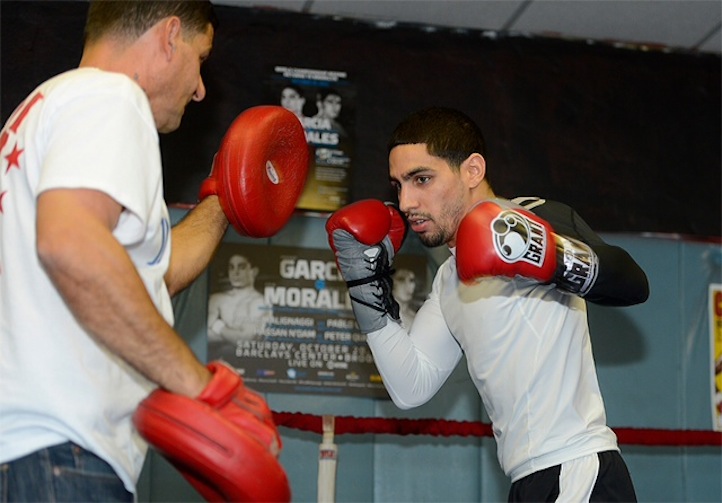 When Danny Garcia said he wanted to become the greatest Puerto Rican boxer of all-time, many thumbed their nose at the mere thought. Considering that the likes of Wilfredo Vazquez, Miguel Cotto, and Hector “Macho” Camacho have already staked their claim, listening to some relatively unknown kid from Philly suggest that he could be amongst the Puerto Rican elite was humorous. However, the 24-year-old has taken the boxing world by storm over the past couple of years to prove that maybe his aspirations were never too farfetched to begin with. Victories over future hall of famer Erik Morales and a stunning 4th round TKO against Amir Khan put the boxing world on notice and now Garcia will get to showcase his talent in a historic setting as Brooklyn’s Barclays Center hosts the first major boxing card in the city in over 75 years.

“It’s a blessing and a dream come true,” Garcia (24-0, 15 KOs) says as he’ll face Erik Morales a second time in the main event. “It feels great being in a big fight back on the east coast. I’m just proud to know everything I worked for has paid off. I just want to give the fans a great fight.”

The current WBC, WBA (Super) and The Ring light welterweight champion is a man of few words. His easygoing demeanor shouldn’t be confused as a sign of weakness. It’s just that Garcia would rather let his hands do the talking. Growing up in North Philadelphia, Garcia found that his hands had to have many conversations with those that stood in his way. “Before I started boxing I was fighting like every day in school,” Garcia reveals about his hand to hand origins. “I was in the streets as a kid in Philly. There were always fights. I never thought about boxing to get disciplined but when I got into boxing I thought I could beat up everyone anyways so why not get trophies for doing it.”

With his father, Angel Garcia, being a former boxer, Danny had just enough insight to pursue a career in boxing rather than his other love, football. “I always liked sports and used to play football. I’d would have been playing if I was taller,” he jokes. But aside from being short, Garcia didn’t enjoy having to rely on other teammates to get the job done. “I used to get mad at the other players all the time. Boxing came fast and easy for me. Once my father got me into a gym, that was it.”

Garcia left his impression on the amateur ranks as the 2005 Under-19 national champion and the 2006 U.S. national champion. In 2007 he made his professional debut with a first round knockout over Mike Denby. Despite going undefeated for the next four years, Garcia’s name still hadn’t quite resonated with the casual fan. With Mexican legend Erik Morales coming off of a stunning performance against Pablo Cesar Cano, many thought that Garcia was a young fighter simply being fed to Morales. But Garcia proved the skeptics wrong with a dominant unanimous decision performance.

Rather than being schooled by an elder statesman, Garcia showed the 36-year-old a few things as he claimed the WBC light welterweight title in dominant fashion. However, Garcia would still not gain the recognition he thought he deserved. Many pointed to Morales’ age and said he was ripe for the picking. So Garcia continued to toil in relative obscurity despite being the WBC and NABO light welterweight champion. Then Amir Khan came calling and it was yet another opportunity for Garcia to prove the naysayers wrong. Although Khan came into the fight a 7-1 favorite, Garcia took no issue with being pegged as a doormat for the Brit who had the red carpet rolled out for him. After a slow start, Garcia crushed Khan with a counter-left hook and dropped The Ring champion. Khan survived the round, but Garcia closed the deal with a devastating series of punches to put Khan away.

“I was the champion and he was the challenger but he had the bigger name,” Garcia says about the evening in July that took him from an unknown to one of boxing’s hottest talents. “I knew I could beat him because he can’t take a punch and I’m a big hitter. I had to go out there and show them that I was the better man.” With Garcia holding three titles in the division, his status as the underdog is evaporated. There will be no more sneaking up on opponents and shocking the world. Danny Garcia is the real deal and is well on his way to becoming one of the greatest Puerto Rican fighters of all-time should he turn in more performances like the one against Khan. “I always imagined that I’d be the next great Puerto Rican boxer but I never thought it would come true,” he says.

On October 20, he’ll headline the first major boxing card in the history of Brooklyn as he faces Erik Morales for a second time at the Barclays Center in Brooklyn. Well aware that Morales is looking to spoil Garcia’s coming out party, “Swift” claims that he’s more prepared than ever heading into Saturday’s fight.

“He’s a Mexican warrior with a lot of experience and I guess he thinks he can do things differently in the second fight,” Garcia says. “But you can’t teach an old dog new tricks. I know what he’s bringing to the table. He’s going to try my heart and give me everything he has. I’m prepared for all of that.”