From James Brown to George Clinton to Rick James, funk has laid the foundation for much of hip-hop’s best work, typically via samples. The old work is easy to find, but it’s hard today to come across new, fresh funk. Stones Throw Records artist Dam-Funk is one of the few that can provide it and his new collaboration project with Snoop Dogg, 7 Days Of Funk, is one of the best interactions between funk and hip-hop in recent memory.

“It’s hip-hop, but you can also hear what we grew up on, from Zapp to Evelyn ‘Champagne’ King and Patrice Rushen,” Dam-Funk said.

Snoop (who goes by “Snoopzilla” on this project as an homage to Bootsy Collins, who often rocked under the moniker “Bootzilla”) provides smooth raps, melodies and harmonies, and Dam-Funk supplies heavy-hitting bass and synth-filled beats. Here, Life+Times chats with Dam-Funk about 7 Days of Funk and partnering with the legend Snoop Dogg. 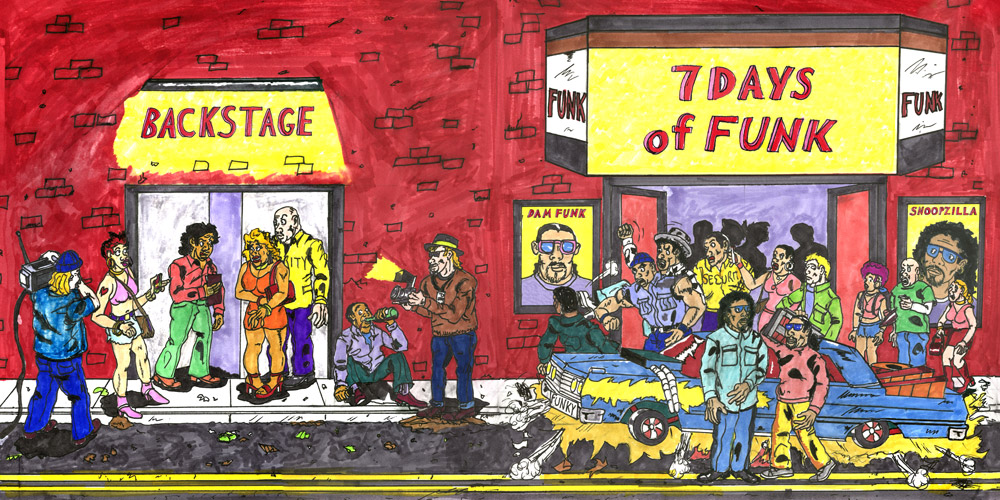 Life+Times: What is funk to you?
Dam-Funk: Funk is a viable music genre in American culture. It’s the music that’s in my blood and I decided to keep it alive as far as this generation. Of course, there’s previous groups and artists that have been around before, but during the 1990’s and 2000’s, it kind of got pushed to the backseat based on everybody’s [love] for hip-hop, house and other genres. Funk is sampled and touched, but really no artist that’s come from a straight-up funk base has been allowed to express themselves in the last 20 years. So right now, we’re trying to allow that.

L+T: From an aesthetic and content standpoint, what is it about the funk that makes it unique?
DF: It’s the chords, the instrumentation, how the keyboards are used, lyrical statements. Of course with P-Funk and Sly and the Family Stone, there were messages involved, as well. It wasn’t always just about a party or shaking your ass. [Ironically] enough, the music that everybody is listening to now has turned into that; no message, no content, nothing to hold on to. Funk has that. Whether it be instrumental with a [strong] title, or a message in the song. That’s how the aesthetic differentiates from the infinite strip pole music that’s going on now.

L+T: How did you and Snoop first meet and connect on this level of funk, then proceed to make an entire record together?
DF: We met each other at an event. This cat that has an art gallery in Los Angeles – his name is Ty G and the art gallery is called “HVW8” (Heavyweight), they had a party for adidas and Snoop was there checking out artwork by Joe Cool, who did the original artwork for Doggystyle. All of his artwork was there and Ty G had asked me to DJ along with Computer J. When it was my turn to do my thing, Snoop was about to leave the event, and from what I understand, he heard what was going on and came back in. I just started vibing, jumped on the mic and freestyled some of the original material I was playing. After that, a few months later, he invited me to do a SXSW Nate Dogg tribute on stage. Backstage, I was in that position where I was like, “Man, I got this CD, I wonder if this is the time to give it him?” I’ve always been the cat to not wanna step on toes and I was hesitant. Sure enough, we were chilling and I leaned in and said, “I don’t want to blow the spot up but I got some heat for you.” So, I passed it on and we started vibing. Months later, come to find out, Snoop had hit me up on Soundcloud like, “Give me some of that heat,” and the message had been sitting there for six months. We finally got in touch. People were talking about it on Twitter, Facebook, Instagram, they wanted us to get together; it was almost like a people movement, like, “It makes sense for y’all to get together on something.” Another few months went by and he came to the pad with no entourage or anything. We went through some tracks and he stumbled on one, and we recorded the vocals right there. It’s called “Hit Da Pavement.” After it stopped, he was like, “Man, this is too good, I wanna do an EP.” We went on from that and started gelling organically, no business people involved, no labels, no management. From that point, we got down and here we are with an EP. We have more, but we’re going to save the extra tracks; seven songs goes with the theme of 7 Days of Funk.

L+T: Expand on that “7 Days Of Funk” theme.
DF: Snoop came up with that concept. It’s kind of like Danger Mouse and Cee-Lo when they came together as Gnarls Barkley. It’s a moniker to join me and him together because we both have separate contracts and albums on the way individually. It just made sense to come up with something new and fresh as opposed to the expected. 7 Days Of Funk is really self-explanatory; just imagine living seven days of funk. That’s what your life, what you’re living and breathing. There’s only seven days in a week, so what’s after that? Another seven days of funk.

L+T: Talk about the single “Faden Away.”
DF: Snoop saw that I had a song called “Faden,” then he ran with it and created “Faden Away,” based closely on things he experienced in his life. It’s just real. A lot of brothers or sisters can relate to fading away from a relationship and that’s what’s so cool about working with him. He knew how to interpret things without me telling him. He took that one word I used as an instrumental title and created a whole concept about it. He did all the vocals. I did all music. It was 50-50.

L+T: When you all got together, did you sit down and listen to old funk? If so, what were you all listening to?
DF: We were already listening to it. We didn’t have to listen to it in front of each other because we already knew. He was into to the same groups I was into: Slave, Rick James, One Way, Mtume, Loose Ends, a whole gamut of funk that was post-early ’70s. We embrace late-’70s, early-’80s type of funk, when a lot of cats, especially in hip-hop, have a nose up to ’80s funk. We embrace, especially on the West Coast. The funk people usually feel comfortable identifying themselves with is the James Brown style of funk, and he is the Godfather, but we’re into other forms of funk. The more fly type of funk.

7 Days of Funk is available now on Stones Throw Records. Click here to get it.