After a busy fall filled with a North American tour and the release of their latest album, Rules of Dada, Olle Cornéer and Stefan Engblom of the Swedish electro house duo, Dada Life, are doing what they love most: producing new music. “With our music, we always say we want to move forward,” states Cornéer. With such a progressive approach to creating standalone tracks and a forward-thinking notion on the future of EDM, the duo continues to bring their philosophy not only into the music they produce, but also include it in the boisterous shows in which they play. Cornéer gives Life + Times his opinion of the American EDM scene, discusses the longevity of the many faces of dance music and explains the brilliant practicality of indulging in bananas and champagne at a DJ set.

Life + Times: You and Stefan met at a chili cook-off in Sweden. Separately, how did you both get started in music?
Olle Cornéer: We actually have always been doing music ever since we were kids. We didn’t know each other on up until we made the first track together. We’ve been doing music forever basically. We had our separate careers and other stuff going on. After we met, we started doing music together. It took two or three years until we realized that Dada Life was our main project. The stuff we did by ourselves, we didn’t have time for that.

L+T: In regards to your realization that Dada Life would be your main project, what do you feel is the gig that really reinforced that awareness?
OC: I don’t think it was one occasion. It was gradually. It took more and more time touring and being in the studio. It just felt right to put all the focus on that. It’s also way more fun to work as two than alone when it comes to touring and when you’re in the studio. It’s more creative. When I have a down day Stefan opens up. When he has a down day, I open up. We complement each other in the studio.

L+T: I have not yet had the privilege of attending one of your sets, but I have viewed them on YouTube quite a bit. Olle, what is it with the bananas? They are everywhere – fans wearing banana suits and even your album cover has bananas pictured.
OC: It’s the bananas and Champagne as a combination. Bananas alone are just a yellow fruit that we don’t care about, but the combination with champagne is a lethal combination…in a good way. It started from us having bananas and champagne on our nights when we started playing. It works. It’s a good combination if you want to keep going all night. Champagne is the alcohol and the banana has the potassium and everything you need for a great workout because you jump up and down a lot. It’s also the perfect food for the club because of its protective seal. It doesn’t matter how sweaty it gets. You can always peel a banana and eat it.

L+T: Oh! That’s science.
OC: Yeah, try to eat an orange or a sandwich in a crowded club. Then, when we started thinking about it and realized that bananas are kind of an interesting combination [with Champagne]. They look good together. 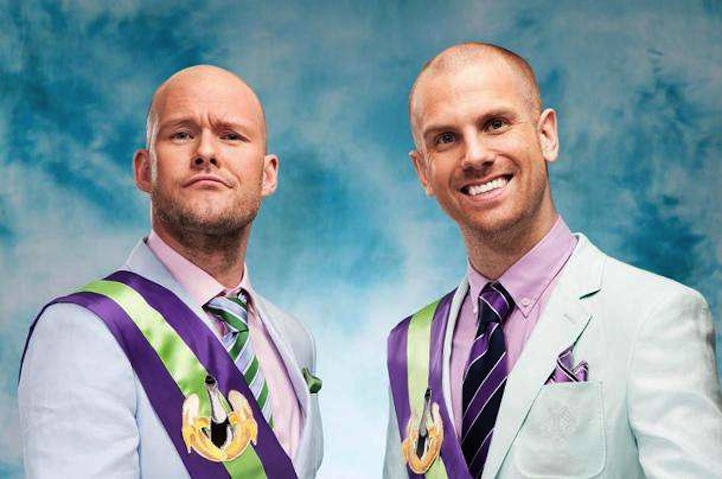 L+T: Rules of Dada is the name of your latest album and is also the name of literal rules you guys have come up with. Are these rules based off your experiences at DJ sets? One of my favorites is, “Arriving beautiful, leaving ugly.” It’s so true.
OC: We just add to them all the time while we’re touring, working in the studio and living our lives basically. Some of them are super practical, like, not having barbeque before gigs. We did it in San Francisco and it ended really bad. Some of them are more like guidelines for us and the audience, like the one you just said, “arriving beautiful, leaving ugly.” That’s the recipe basically of having a good night.

L+T: I agree. Now that the major tour is over, what’s next? What is your latest project?
OC: We want to go forward with the music we’re creating. We want to shock ourselves and the audience all the time to the music we’re creating. Making an album is like taking a big leap. You need to almost reinvent yourself completely. We want to go into the studio and start experimenting and realizing what we want to sound like in the future.

L+T: In regards to experimentation, you no doubt play different mixes to audiences in Europe and here in North America. What would you say is the biggest contrast between the European and the American EDM scene?
OC: It’s so different in different parts of America or even at different parties in the same city, like New York or whatever. Americans and Canadians, right now, have more fun because they don’t have the history in the same way as European dance music. In America, it’s younger and more okay to mix stuff that wasn’t mixed before. That shows in the music, in the parties, in the attitude towards dance music. It’s just way more fun. That’s what we wanted to do when we first started like five years ago. What we wanted to do was mix stuff that wasn’t supposed to go together basically.

L+T: With the different subgenres?
OC: Yeah, subgenres and just where you’re having fun when you’re supposed to be cool or have a certain attitude.

L+T: With some of the subgenres that seem to come out almost monthly, do you think some have more of a longevity factor than others? Are some of the new subgenres simply faddish?
OC: I don’t think any of those will survive. I think the style that will survive is an ongoing mixture of everything that’s picking up. House is picking up; dubstep is picking up, jumpstyle. It’s a mix of all things moving forward. That’s what I like about the Americans’ attitude to dance music.

L+T: Just experimentation at its finest. I think that’s what one thing I admire across the board from you and Stefan and some of the new American producers and DJs. They are open to experimenting and not sticking to one genre’s definition.
OC: That’s the most important factor. It will stay real. It will keep on experimenting and pushing the sound all the time while the commercial version of dance music will never push anything…it can just copy and stay one step behind.

L+T: You have a carefree approach to your set and even the production aspect. What do you think has helped in keeping your own identity as a duo? Based off of that thought, what advice would you give young producers and DJs that are trying to make their own mark in the music industry?
OC: I think the most important thing that young people so far forget is that they think it’s kind of easy to make a good song in the studio. Just because you have the tools doesn’t mean the results will be that easy or great. Do more tracks, more tracks, more tracks. The key in a demo is originality.

L+T: I feel that sometimes a lot of emphasis is placed on the type of equipment a DJ uses. Do you think equipment determines a great track or does creativity play a bigger role?
OC: No, it has nothing to do with equipment. We can do everything we do on the laptop only. I think that’s what some people might fool themselves with. It’s a craft. We work super hard.

L+T: It certainly is a craft. In light of what you just said, that leads to my next question. I appreciate the varying viewpoints I receive. Every time I have a conversation with a DJ, I like to poise the following question: Do you think a DJ is a musician?
OC: A DJ today isn’t really only a DJ. He has to be a producer too in order to make it. There’s no DJ today that doesn’t make his music. I can’t think of one. By making or producing your own music, you’re definitely a musician.