Basque style music is characterized by the danbolin (snare drum), txistu (pipe whistle), txalaparta (wooden xylophone-like instrument), and other folk instruments. Though much of the classic Basque music elements have been lost through time, there is a small group of artists that have given this genre a modern twist. UK based folk/electonica (folktronica if you will) band, Crystal Fighters, combine the aforementioned Basque instrumentation with progressive dance music and folk. From their US debut of Star of Love last year to the May 2013 release of Cave Rave, the band continues to transcend musical barriers. In order to grasp the essence of the band’s creative direction, Graham Dickson (guitar/txalaparta) gives us insight on Cave Rave’s abstract cover art created by the acclaimed artist, Paul Laffoley.

Life + Times: I had the chance to listen to the snippet of “Wave.” Based off of that song and the album that dropped last year, Star Of Love, what can we expect on the new album that’s being released in May? Will it still have that electro, Spanish folk vibe or can we anticipate something different?
Graham Dickson: We’ll always have the dance music vibe to us. That’s really where we came from originally. I think with this album we focused more on the lyricism. Having to play the first album for a few years and touring, we were able to kind of see what works and what doesn’t work. We’re looking forward to heading back on the road. Same stuff, more Basque instruments. We did more research on the ancient times in the Basque country. We’re going to be using instruments before the Basque culture as well. We feel like we’re evolving and so the music has evolved.

L+T: Going back to the “Wave” track specifically, the songwriting is amazing. “Your heart is the sun in the depths of my mind” is an example of the symbolic depth in this song. Do you all collaborate in the songwriting?
GD: Sometimes one person has an idea for a chorus or lyrics and then they’ll share it. No one ever just writes the whole thing by themselves. We always collaborate. I’m glad you like those lyrics.

L+T: I always soak in the lyrics just as much as I do the rhythm and melody of a song.
GD: With this album, it’s more of like a regular song structure. So, you have the opportunity to fit in more lyrics and more verses, and bridges.

L+T: With Star Of Love, it was heavily inspired by vocalist, Laure Stockley’s, grandfather’s unfinished opera. What are some of the muses behind this new album?
GD: We are still researching the Basque culture and there is still so much more to learn. I think Laure’s grandfather’s influence got the ball rolling in terms of our appreciation of the instruments of the Basque culture. Now, we are interested in what was happening before then, and thinking about classic tribal music from different regions of the world. A lot of it sounds similar with a lot of drums, percussion…We’ve named the album Cave Rave. We’re throwing cave raves within a year. We’re now focusing more on cave art in ancient pre-Basque civilization and the music coming from then. We feel like we’re on this endless journey with all of these subjects. To only focus on one aspect of it kind of blinds you from the whole picture.

L+T: That’s really progressive. I admire your artistry as a band – you are creating something different while staying true to your dance music/Basque inspired sound.
GD: That’s a major thing for us. We love modern dance music. We go listen to DJs play when we’re not on tour. We really do know the importance of keeping modern touches. That’s just as important to us as researching the ancient times.

L+T: Let’s discuss the abstract cover art of Cave Rave. How did you even think to collaborate with Paul Laffoley on this artwork?
GD: The explanation of this whole thing is pretty mind blowing to me. I recently saw his first international exhibition in Berlin two years ago. The whole experience was intense and very thought provoking – especially the fact that he has a perfectly symmetrical cylindrical chip lodged in the center of his brain which he thinks was placed there by extraterrestrial beings as a way to study us; and the images of future technologies and explanations of the universe which he sees in lucid dreams and then paints are a side effect of the chip. From that moment on, I wanted him to collaborate with us for the cover of Cave Rave. 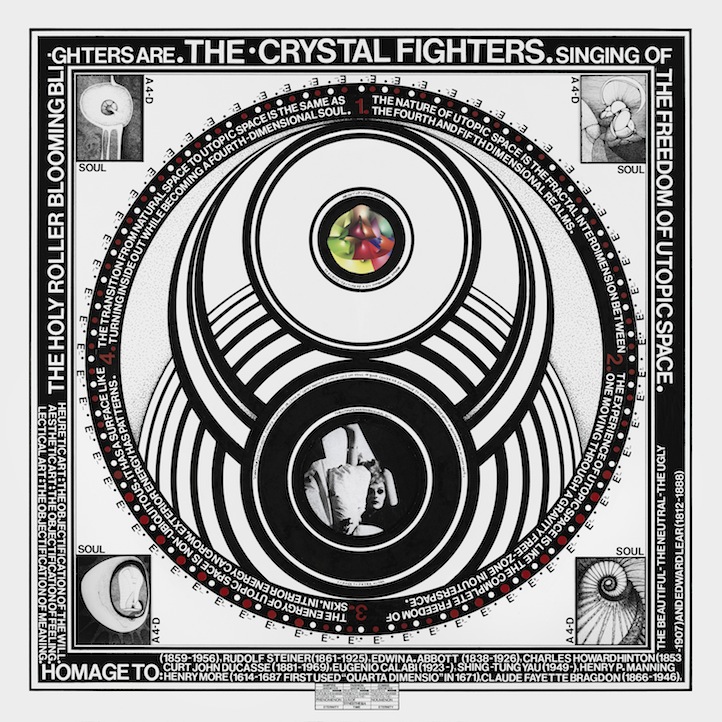 L+T: What is the meaning behind the art?
GD: The artwork itself has numerous layers of meaning – from representing the connectivity of all knowledge in the universe to the representation of the atom of consciousness which is most likely the sixth dimension (the colorful sphere). We connect with the idea of us (Crystal Fighters) “singing the freedom of utopic space.” We also love the fact that it looks like it could be cave art from a galaxy far away or an explanation of the unknown. We are still learning about the meaning on a day to day basis. The names that he references on the bottom are great stepping stones towards a total understanding of the piece itself.