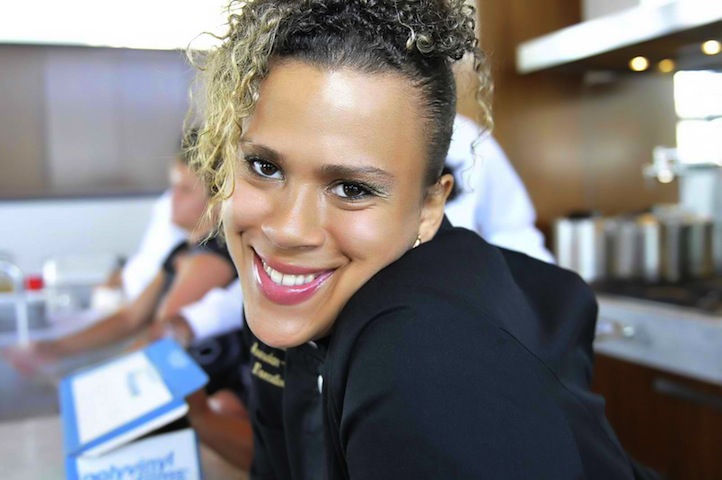 Only 30 years old, chef Jourdan ChaTaun has already realized her teenage dream of being a personal chef for a celebrity and now she’s a star on the rise herself. The Seattle native said cooking helped save her from childhood trauma and abuse, and still helps her battle depression. When she’s not creating magic in the kitchen, she shares her personal story on the lecture circuit with her mentor, author Terrie Williams. She was executive chef for Sean “Diddy” Combs for several years before landing in boxer Floyd Mayweather Jr.’s Vegas camp just as he was preparing a big fight.

Life+Times: Please tell me about you earliest cooking memories.
Jourdan ChaTaun: My earliest cooking memories were spent baking apple pies and making cookies with my grandma. We made everything from scratch. I remember asking my grandma why we had to put lemon juice on the apples and her telling me that it would prevent the apple from turning brown. My grandma bought a tiny stool for me to step up on so that I’d be able to see every ingredient. We’d make real frosting in a large batch and then separate and color cookies. We had some beautiful, bold colored icing for our sugar cookies. Then we’d add all kinds of candies and sprinkles. I remember watching my father prepare a family feast for three days before it happened. He was very magical in the kitchen. I think if he’d lived he would have opened a real restaurant. My father was definitely talented when it came to the kitchen. He had a beautiful mansion in Saguss, California and the thing that stood out most was the kitchen and the huge pantry filled with anything you could think of, it was like a mini-grocery. The stove was built into the counter and controlled with electric panels. I was in awe that you could have a stove built inside of the counter that was a smooth surface that acted like a counter top when not in use. It’s funny how vivid my memories are when it comes to the kitchen. The kitchen has always been my safe haven and I’m thankful that my grandma introduced me to the art of cooking.

L+T: Do you remember the first time you thought you could make a living cooking?
JC: I used to sell apple pies for school bake sale. By 8th grade I was a professional apple pie maker and I remember outselling everyone else. A few mothers came to me asking how much I’d charge to privately make pies for them. I was shocked they wanted to pay me to make more but I came up with a price. My grandma got a kick out of people paying me to make pies. I’m not sure how many pies I made in 8th grade but it definitely kept money in my pocket.

L+T: Please tell me about your audition for Sean “Diddy” Combs.
JC: I had moved to NYC from Seattle with the dream of becoming a celebrity’s personal chef. That was the goal. I didn’t know anyone in NYC and I didn’t have a plan on achieving my dream besides moving to NYC and putting myself in the mix. Since I was a little girl I believed NYC is where dreams are made reality; “If you can make it there you can make it anywhere.” I still believe that about NYC. Meeting author and publicist to the stars, Terrie Williams changed my life. We formed a bond. She was writing a book called Black Pain: It Just Looks Like Were Not Hurting in which she explored depression and its many faces in the black community. I had always had issues with anger, and sadness related to childhood trauma and abuse. I had never wanted to be associated with depression because that would mean I was crazy and therapy was for white people. Terrie got me to understand that I had been suffering with depression for years and its face for me was anger. I started doing talks with youth groups with Terrie and began sharing my story. Getting a job as a chef was nearly impossible as all NYC restaraunts insist on New York experience. When I told Terrie I was moving home to Seattle because I hadn’t found work she made some calls. It happened to be the same day Mr. Combs lost his personal chef. Within thirty minutes of Terrie’s call I had an interview set up with the Human Resources Director at Bad Boy Worldwide. I was so nervous. I’d seen him on TV and I was intimidated. I created tasting menus for him that day. Then I get an email from his office telling me his likes and dislikes. I went back to the drawing board. Initially the tasting was to be at his house, but it was moved to his offices, which didn’t have a kitchen. I’ve never believed in microwaves so I didn’t even consider using them. So I packed up two large trunk sized containers filled with pots, pans, cutting boards, and burners. When I first met Puff, I was dragging my makeshift kitchen through his office. He just kind of looked at me. I cooked five courses for Puff, and in the middle of the third he said, “You got more food?” I smiled and said I had two courses left. Talk about full circle moments, Puff’s favorite dessert is apple pie, my specialty since childhood. I can make them in my sleep. The night of my audition I got a call that Mr. Combs loved my food and energy and that I’d have a 90-day trial period if I wanted the position.

L+T: When you began working with Floyd Mayweather Jr. he had a fight date set. How’d you help prepare him for Ortiz?
JC: It’s funny, I learned Floyd Mayweather needed a chef because he said so in a tweet. Camp started on July 18, 2011. Floyd is a machine. He can eat whatever he wants whenever he wants because of how much he works out. He spends 6-8 hours on workout regimes. I’d have his meals for the day set up no later than 2pm then go and watch him train at the gym. I always cook two full meals in one. So two different meats, starch and vegetables. Food is really psychological and I’ve noticed that most food associations are with childhood memories. Normally Floyd knows exactly what he wants to eat and will sometimes tell me how he wants things cut up. But during training camp he let me create whatever I wanted. The most important thing working for Floyd is being available when he calls. You just never know when that’s going to be. Floyd’s favorites of mine are Braised Beef Ribs, Pecan Crusted Tilapia with mango salsa, coconut rice, salisbury steak with gravy mashed potatoes and corn, chicken enchiladas. He also loves my apple pie and rice krispy treats.