For Iain Cook, Martin Doherty, and Lauren Mayberry of Glasgow-based band CHVRCHES, 2013 proved to be its most pivotal year. I dare not pigeonhole them into one genre because their sound is comprised of a colorful array of sounds influenced by ’80s pop, hip hop, alt rock, and electronic dance music. The Bones of What You Believe, the band’s debut album released in September, consists of the ingredients that define the trio’s eclectic style – retro synth effects that would make Depeche Mode proud (they toured with the legends this summer), pulsating 808 drums, spurts of guitar riffs, and sultry smoothness courtesy of Lauren’s leading vocals. As if releasing an album and touring with an iconic band wasn’t enough, CHVRCHES wrapped up their lengthy fall US tour this week. “We did my first ever, proper American Thanksgiving where basically we ate loads and loads of food, got really drunk, and sat in front of the TV watching American football,” Martin states with excitement (and an air of pride). They can now check celebrating their first American holiday – Thanksgiving – off their list of 2013 achievements. Martin reflects on the evolution of CHVRCHES and dishes on the band’s New Year plans in this exclusive Life+Times interview.

Life+ Times: 2013 seems like it was such an amazing year for you guys. I’m not in a band and I’m even jealous you three opened for Depeche Mode in the summer. How was that?
Martin Doherty: Oh, man. That was pretty massive for us. [There’s] been a lot of incredible moments this year, but that was the highlight for sure. They’re for sure a huge inspiration for what we do. To get that sort of endorsement panned out good for us. The shows were amazing and you always hear the horror stories about Depeche Mode fans, but their fans were great.

L+T: Did they offer any words of advice?
MD: We met them in Glasgow recently and they were exactly how I hope they would be. It’s interesting even just to talk to them and not specifically advice. I feel like we learned a lot from them. That was more fun the whole observational point of view – like watching them on stage – and the most interesting thing being how these songs are not typically stadium rock songs translate to people at stadium level, how they capture the crowd. Yeah, we learned lots from them. 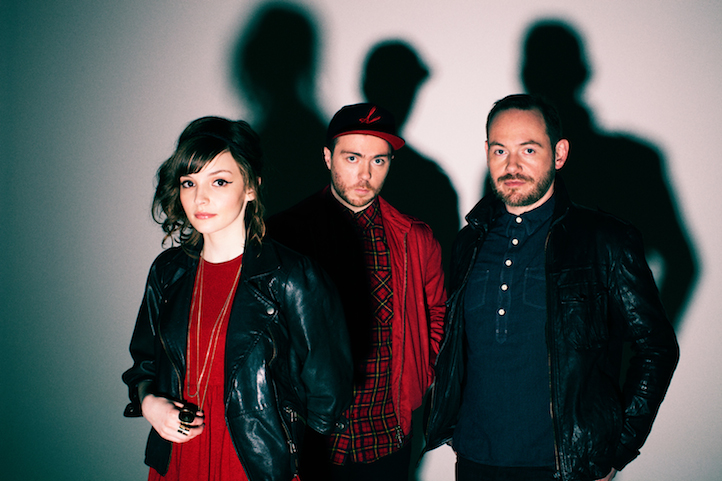 L+T: That’s an awesome experience. One thing I’ve noticed with CHVRCHES – outside of the original tracks – are the remixes. You remixed MS MR’s “Hurricane.” Blood Diamond, Tourist, and other artists have reworked some of your tracks. Have you thought about collaborating with a DJ-producer on the next record?
MD: It’s something that I think about all of the time. The idea of collaboration is something that I’m definitely open to in the future. I think there were opportunities this year that we possibly didn’t pick up because we were really keen to establish ourselves and not to do that kind of thing too early. If you do something too early and it becomes a habit, then it overtakes what the band is. It can be a mistake if you do that at the wrong time. I think looking forward into next year, collaborating with people is something I’d be very interested in.

L+T: I completely understand what you mean. The album was very hands-on being that you actually produced everything yourself as a band. Establishing who you are as an artist before honing in on collaborations was a smart move. All three of you bring different attributes to the band. You come from a producer background. How have these qualities effected the creative process and the release of the debut album (The Bones of What You Believe)?
MD: Yeah, that’s definitely the case that we all bring something independent to the project. Everything that we’ve done up until this point in our own personal sort of music ventures have become a learning experience for us – how to do things the right way having done them previously the wrong way. That kind of runs through everything – from the day-to-day of being in the band all the way to the creative process in the studio. We have very different musical influences. When listening in the studio, they all kind of melt into one. I guess that makes the sound of the band. The individual personalities is really an important part of what we do.

L+T: “Lies” captures the essence of what you all are about. It has the ‘80s synths, hip hop influence, and electronica. I have to ask you this because I know you do a lot of the production – Did you sample Billy Squier’s “Big Beat” in “Lies”?
MD: Eh, no. We didn’t actually for fear of getting sued. We talked about it in the very, very beginning. The drum rhythm is coming from a similar place. We’re certainly inspired by it. As for using the actual sample, no, we didn’t fancy giving away half the song for clearance and all that sort of stuff. It’s kind of messy legally. So, we went on our own path and recorded a bunch of sounds in the studio with lots of kick drums and snares to turn it into something. You know actually, Dizzee Rascal – he sampled it and that’s when it first came to my attention. Then, I heard “Big Beat” is a Billy Squier song. It seems like so many people have sampled that over the years and I guess they all paid handsomely. We just tried to make a massive wide drum sound, cut up, [and] make it mastered.

L+T: It came out great! It’s so funny you brought that out because when I first listened to it (“Lies”) I was like, ‘Man, I can’t put my finger on what track that is, but it sounds so familiar.’ You’re right – Dizzee, Jay used it for “99 Problems” too. It’s a hot beat. Going into 2014, what do you guys have planned?
MD: I can tell you that we have a bunch of stuff planned. We’re going back to New Zealand, Australia, and Japan for a bunch of festivals, a European tour, and then back to the US in the first half of the year. I can’t really give away specifics for fear of getting my wrists slapped, but there will be festival appearances.

L+T: It will be another busy year. You’ve been working together as a band since 2011. What do you feel like you’ve learned from Iain and Lauren?
MD: That’s an interesting question. We’ve got to a point where we’re settled in our relationship together. I feel that way more and more so every day. I may be a little hotheaded at times. (Laughs) If you’re in a van or a bus with people for months and months at a time and you get along, I guess that’s a sign you are genuinely friends. I’ve learned plenty from them.