Nothing could slow down Christian Hosoi during the 1980’s. The impossibly slick skateboarder dominated the field alongside rival Tony Hawk, until Hosoi’s hard-partying lifestyle derailed his career in the ‘90s and landed him in jail in 2000 for a 10-year sentence for drug trafficking. After serving several years, Hosoi left prison a converted Christian and now works as a pastor. Life+Times caught up with the skateboarding legend to talk about his new autobiography, Hosoi: My Life As a Skater Junkie Inmate Pastor, as well as his thoughts on the industry he helped establish.

Life+Times: In your book you lay out your own personal history. What prompted you to decide now is the time to share this with people?
Christian Hosoi: It’s funny. It came out organically because I was talking with a bunch of people who wanted to do a movie. From the documentary [Rising Son], they wanted to do a feature film. I was talking to indie people, studio people, you know, big studio people, and I had like five or six people approach me to do a movie. But it just didn’t sit well in finalizing it. And Harper Collins ends up approaching me and saying, “Hey, we’d like to do your book.” And it just happened like that.

L+T: Do you find it pretty hard to believe the life you lived?
CH: No, because I was the guy living it. It seemed normal what we did. What I thought was kind of weird was if you didn’t do what we did. But I think that if I were to take myself out of the picture – yeah, it’s ridiculous what we did at such a young age. All the drugs that I did. You know, traveling the world by myself – doing whatever I wanted. No real boundaries, no limitations. I would never let my son do that today. But you know things have changed. My mentality has gone from a worldly place where it was all about me, to a spiritual place where it’s all about people. So now I really do care a lot more about not only myself, but about my children, about people, about our culture. I think that’s where wisdom comes, through rock-bottom experiences.

L+T: So 12 years ago when you were entering prison did you think you would have the opportunity to be where you are today, to be able to have your book, to have your own company again and to be able to work on other projects in fashion and film?
CH: Yeah, matter of fact when I was in prison was the first time in my life where I threw up my hands and said, “What happened? Why am I here?” And at that moment my girlfriend at the time said, “I’m quitting drugs and I’m going to church, Christian.” So at this moment, I’m sitting here in a prison cell and my first phone call couple days after being in there I just said, “Look, I’m looking at 10 years.” And she was like, you know we just have to trust in God. And I was like, “God? Babe, I need a lawyer. I need an attorney. I need bail. What’s God going to do for me?” And she was like, “God’s going to help us. Go get a Bible.” And that night, I went and got a Bible. And I’ve never read a Bible before. My name is Christian. My nickname was Christ on the cover of Thrasher magazine in ’85. I invented a maneuver called the Christ Air right after that, and never read a Bible. And so that night I went and opened it up and read it for the first time. It was almost like the scales fell off my eyes, and I realized there was something bigger than just me and what I was doing in my little bubble of what life was. It was like all of a sudden I realized that I was created for something, that there was a purpose for my life. God had a plan for it. An And it was my choices that got me to where I was at. It wasn’t, “Oh I deserved this, or I did something bad so this is my karma.” 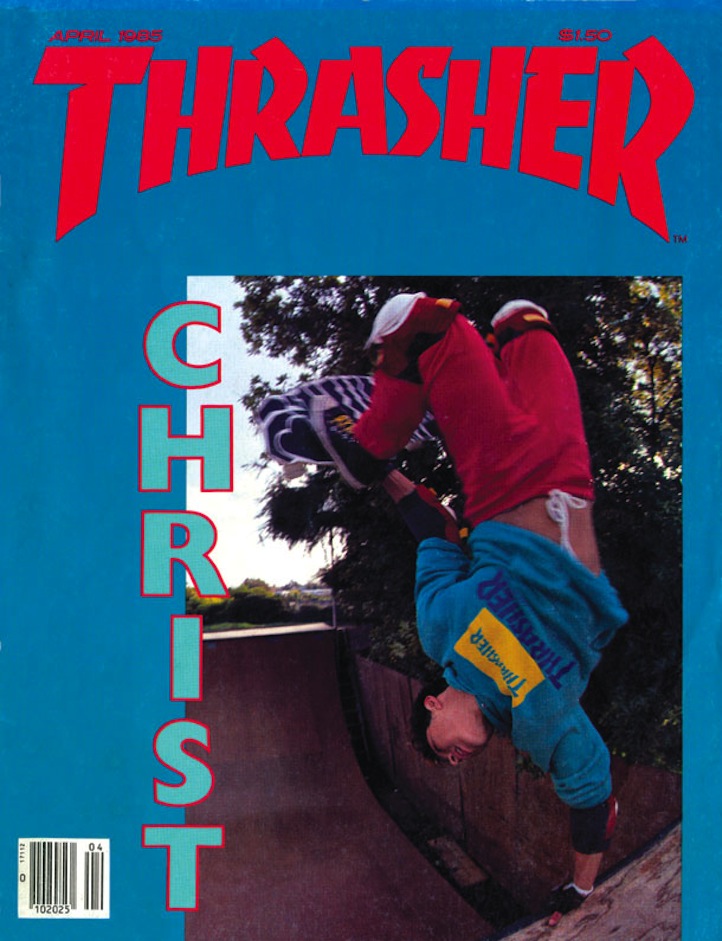 L+T: It’s remarkable really. Since you managed to change your life around so completely, you’re still skating competitively. What part of your life does skating mean? Why are you still skating?
CH: Well, now I remember telling God, I’ll quit skateboarding. I’ll go into the desert. I’ll go to the jungles. I’ll preach the gospels anywhere, when I got saved. And I just remember the Holy Spirit be like, didn’t I give you your wife, your kids and your skateboarding? I was like, wait a minute, you’re right, forgive me. I’ll be the best husband, the best father I could be. And I’ll skate as good as I can ‘cause I want to represent you.

L+T: So you have been in the skate industry for 30 years about?
CH: Yeah I’ve been skating for about 38 years now coming out this year, but pro for 30 years.

L+T: You’ve seen the industry change for all that time. How have you seen the business of skateboarding change?
CH: You know the business has really grown astronomically. When we started it was real small. Real backyard, almost like there was five major companies that did everything and two magazines. So it was very family oriented. Now, like any other business, you don’t know. I don’t know some of the names of the brands and they’re all in skateboarding. I don’t know a lot of the pros, when we were all close friends back in the day. But I think it’s come full circle where the identity and image of a pro skateboarder — somebody who is a lifer or somebody’s who’s passionate about it has come full circle because they do respect it and they love it. They do it regardless if there’s money involved. They want to keep it authentic.

L+T: So what is your approach in business with Hosoi Skateboards?
CH: My approach is just be real. Be who you are. I grew up with my father, and he graduated with his Master’s Degree in Fine Arts at Berkeley in the ‘60s and so he read about art and history and he knew all about it and so his take was to be original, be an innovator. Don’t be a follower. Followers are wack. So my whole take on life was to do that in everything, whether it be the shape of my board, how I wore my clothes. The carefree attitude that I had, it all went from that. And I think that’s what represents my brand, is to just be who you are. So many people are trying to be somebody else and it never works.

L+T: Do you think your skating has also had that same consistency?
CH: Well, I’m in my mid-40’s. We don’t heal as fast. We’re not as resilient. We’re not as strong. I’m a family man. I’m a businessman. I don’t skate eight hours a day like I used to. But for how old we are? Man, surprised me. I didn’t think we’d be skating passed thirty. I didn’t think I’d live past 21 let alone skate at 30. And then I’m like, I survived 21. I’m like, man, I’m dying at 27 like Janis Joplin or Jimi Hendrix. I’ll probably die right around there. I’m a super famous guy. Literally that’s the kind of head you had when you’re like this “wannabe super the best of the world” at something. You’re just told all these things. Now I’m having more fun than I ever had at skateboarding because I appreciate it. I actually don’t take it for granted.

L+T: Is it important to win?
CH: Well, I’m competitive by nature. We grew up competing. That’s how you became number one, that’s how you get your picture in the magazine. Now, it’s all political, but back then it was built strictly on your performance. And Bruce Lee was my idol. I wanted to be like him. I wanted to smash everybody. I was going to be a martial artist. And then I got a skateboard and I was like, sick. I’ll be the Bruce Lee on the skateboard. I took all of his ethics and workouts and breathing and techniques to skateboarding. And that’s why I think I was so competitive. I wanted to have the reputation. I think that’s kind of like the attitude you need to have. The passion has to be there. The dedication. The perseverance. All that’s got to be there, because there’s going to be people who want to take you out. They don’t want you there because they want to get there too. It’s like King of the Hill – you’ve got to fight for it. And that’s what I was doing. And now I can say I’m very, very humbled with the fact that I reached that place.