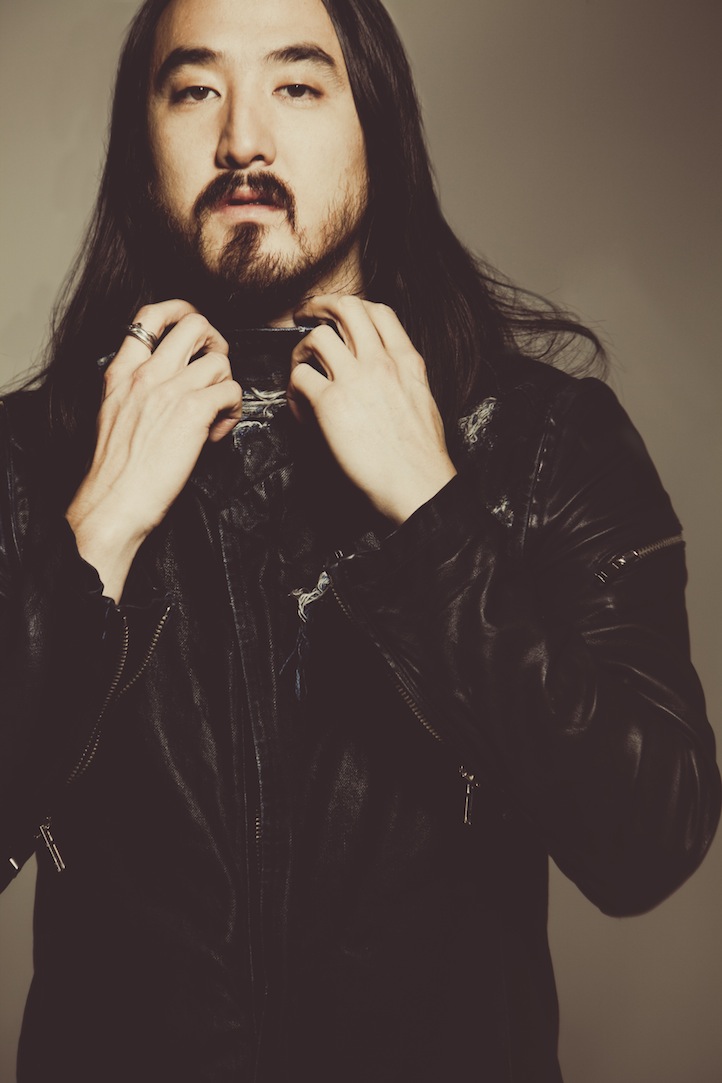 It’s a Friday night in Austin, Texas and the air is abuzz with people from every corner of the globe looking to get a bite of SXSW’s musical offerings. Steve Aoki, one of  electronic dance music’s biggest DJs, producer and founder of Dim Mak Records, closes out the mtvU Woodie Awards with a high intensity set and unexpected drop-in from Lil’ Jon to perform “Turbulence.” After the performance, Aoki, clad in graffiti jeans and a loose Dim Mak tank, looks more like he just walked off a plane from Los Angeles instead of a humid, hot Texas stage after an energetic DJ set.  Here, Aoki sits with Life + Times to talk about everything from the future of dance music to his fashion collection.

L+T: I know you’ve done a lot of different remixes. You’ve done stuff with Lil’ Jon and with “Cudi the Kid,” you worked with Travis Barker and Kid Cudi. What can we expect for 2012?
Steve Aoki: Well, my album just came out, so I’ll be doing music videos for every song on the album. We just did one for “Heartbreaker” and we’ll be doing one for “Cudi the Kid.” So, just working on that, and just did a collaboration with Knife Party from England. My collab I did with Tiësto is finally coming out as a vocal version in June. I did a collab with Diplo as well. I’m just trying to figure out where and when to put all these out. I did a collab with this rapper named Iggy Azalea.

L+T: Where is she from?
Steve Aoki: She’s from Australia. She’s really underground, amazing new rapper. I’ve been venturing into new EDM tempos. Yeah, I just have a lot of music coming out.

L+T: With Wonderland, you not only play with different dubstep, electronica sounds, but a variety different things. Where do you draw your inspiration?
Steve Aoki: I’m just a fan of all music. So, even before I was even DJing and into dance music, I was into rock. I’ve been doing my label for fifteen years, Dim Mak. We started out with all kinds of variety of alternative and indie music. Then we started signing dance music. Honestly, the album took like three years. Working with all the different artists as well, brings in a lot of influence in the music. I wanted a proper new album that would work around songwriting unlike the club singles that I typically put out like the “Turbulence” record.

L+T: Ok, a random question for you. I know you have your fashion line with your sister [Devon Aoki], what’s new with that? Do you have anything coming out? I’m really excited to hear about it.
Steve Aoki: We don’t have it out yet, but we have a lot of the concepts finished. We are just waiting for the right steps. She just got married and had her baby, so she’s focusing on that. We are going to launch at some point soon. When we do, I’d love to talk to you again about that. It is a big endeavor for me. I’ve been working with her on it for a long time.

L+T: As far as fashion goes, what made you want to venture into and dabble with fashion considering you’re a DJ? Do you think music influences what you have created with fashion?
Steve Aoki: They are both art forms. All art kind of co-mingles and it’s all part of a lifestyle with music…you wear certain clothing. It’s a lifestyle identity and you know, and for me it’s a big deal. I am influenced by Rick Owens and a lot of different designers from Japan. Working with Devon, she has a whole history of influences. She’s so immersed in the fashion world. It’s gonna be exciting to finally get this out. A lot of the stuff is coming out; we just don’t have the actual date.

L+T: In regards to the different musicians you want to work with different genres outside of your comfort zone, what challenge do you think you’d be willing to accept in the future in terms of working with an artist you haven’t worked with or a genre you’re not used to?
Steve Aoki: The artist I want to work with most…well, living right now, that I would work with would be Zack de la Rocha. I am a huge Rage Against the Machine fan. Or Chester from Linkin Park, I love his voice. Those are my two favorite singers. But, at the same time, you know, working with someone like JAY Z. Working with Jay would be sick too. With working with dance music and being a producer, you can fluctuate and evolve. That’s the thing with dance music now. The barriers between all the different roles in dance music have collapsed. Dubstep artists are working with dance artists. You hear trance style in dubstep songs. Everyone is kind of co-mingling and working together. That never happened years ago.