Last weekend, Randall’s Island was taken over by the festivities of the Governors Ball NYC Music Festival. Despite the mud and less than savory weather conditions, the show still went on. Life+Times caught up with Nashville based duo Cherub, comprised of Jordan Kelley and Jason Huber, on the final day of the festival. Three years ago, their journey as Cherub kicked off at MTSU (Middle Tennessee State University) and hasn’t lost its momentum since. They bring an effervescent approach to their self-produced R&B and pop tracks – kitschy, yet witty lyrics, understated guitar chords, and a symphony of electronic effects.

Life + Times: Did you grow up playing music?
Jordan Kelley: I got my first guitar when I was in 3rd grade. I wanted this Toys “R” Us guitar really bad and I didn’t get it. I got a nicer guitar, thank God for my parents! They started me off on an electric guitar. I think a lot of parents are like, “Start with an acoustic, get good at it, show dedication…” That’s how you get them to hate it! I can only make one noise. I got an electric guitar with a funky pedal board and I was able to do all my weird things. I never started singing until the Cherub thing happened. I always wanted to sing, but I was too much of a pussy to even try to write my own songs. It took a couple of life experiences to have to step up and start doing it regardless of if it sucked or not. So, I’ve been playing guitar forever and singing for a little bit. 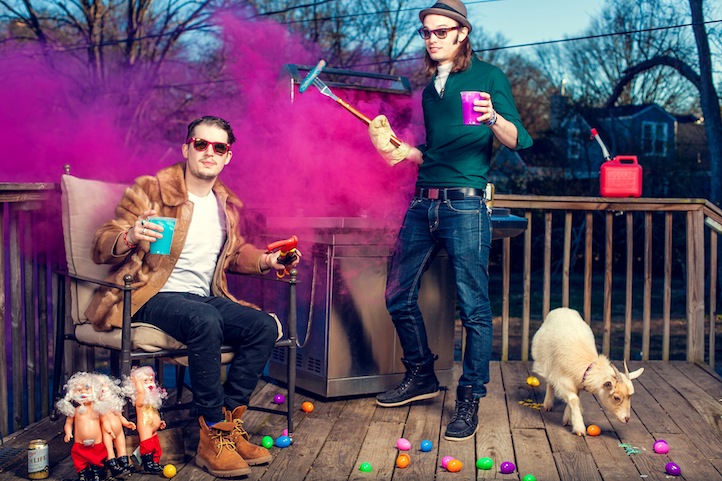 L+T: So, is that you playing [the guitar] on “Where We Should Be” on the latest EP (100 Bottles)?
JK: Yeah. We can actually play instruments – that’s the thing.

L+T: Everything is self-produced and played by you both, correct?
JK: Yes. It’s me and Jason on everything. Nick Curtis is also involved with a lot of the sounds. He mixes and masters everything and puts his two cents in on all of the songs.
Jason Huber: Even all the drum hits Jordan literally performs in and it’s not like clicked in with a computer. I’ll wake up in the morning and he’ll have headphones on and I’m just hearing click-click-click-click without looking. He’s just jamming away on a keyboard.

L+T: For you, Jason – did you grow up playing instruments too?
JH: I picked it up in middle school when me and some friends decided to start a band before any of us actually played instruments. So then it was like, “Hmm…who’s gonna play this one? Who’s gonna play this one?” It was more just a good idea that ended up turning into something I’ve been doing for a long time. Back in North Carolina, that’s where I’m from, I specifically remember the concert where I decided to pursue music. I was watching Annuals. I think it was their first concert. It was the first time I had ever seen them. I stumbled upon them and they were super inspiring. That was the point where I was like, “I want to do this for my life.”

L+T: In March, you released 100 Bottles. What projects are you working on now?
JK: We just got done recording new material for a full album. It should be done within the next month. Then, we’ll put it out – but we don’t know yet. Just to have the material done and be able to listen to it in our headphones and make modifications feels good. We’ve been busy doing that. We go back to Nashville to record all of our stuff. We don’t just stop at random studios where we’re at. We have a spot with Nick who is the secret third member of Cherub.
JH: He’s the one who mixed and mastered all three releases thus far.
JK: All of our friends and loved ones hate us. When we have time back at home, it’s spent in the studio and they never see us.

L+T: You guys go in and kind of shut the world out. That’s the way it should be.
JK: Hopefully, it will all make sense down the road and we can all have a good time and live great. It’s just one of those things. 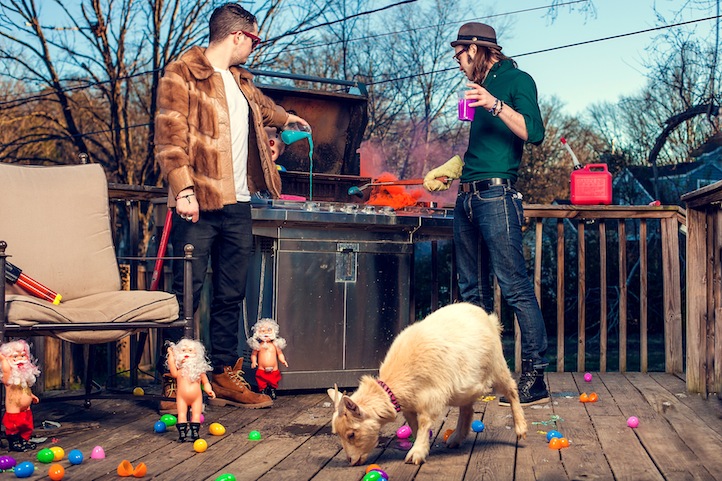 L+T: I was reviewing different blogs prior to this interview and most of them categorized you as “indie influenced electronica.” Yes, this is an actual quote. I don’t really think that fits. What do YOU think shapes your sound? Any particular muses?
JK: I think it’s awesome that you said that the genre that people are categorizing us as doesn’t fit. At the end of the day, when you’re coming out and no one knows what to think of your music – you’re immediately gonna get lumped in.
JH: You’re gonna be put into a box.
JK: I remember reading Santigold’s thing with M.I.A. about how she was getting tagged with her, but they are completely different sounds. Someone just wants to put a finger on what it is and lump it in with something that it’s really not. Our music is pop music. We focus on making stuff that make people feel good listening to and feel something listening to.
JH: Selfishly, it’s just what we like too.
JK: I listen to so much R&B, old early ‘90s R&B. I’ve listened to rap music since I was a little kid. I would listen to old school shit like Big L along with Pantera – like gnarly “I’m a get drunk” white boy shit. At the end of the day, I don’t really know what we sound like. I know we’re gonna get lumped into genres forever. This next record has a lot more R&B. It sounds like Aaliyah kind of, but with male screwed vocals.
JH: We’re both non-classically trained too. That doesn’t necessarily hinder us. We function as musicians. It’s a refreshing thing. We’ve learned from the radio. We both grew up listening to the things that we like and that’s what we learned.
JK: My mom listened to, like, Michael Bolton.
JH: My dad listened to Billy Joel.
JK: Jason, your dad’s favorite album is Shaggy – Hot Shot, just to clarity. (Laughs)
JH: In the car, my dad calls us on the way to SXSW two years ago and he goes, “Hey, I just want to let you know how proud I am of you guys. You guys are doing your thing. I listened to your record and it’s my second favorite record of all time.” I said, “Well, wait! What’s your first favorite record?” He says, “You know it’s Shaggy’s Hot Shot.” That’s what I grew up on. I’m coming in second to Shaggy.