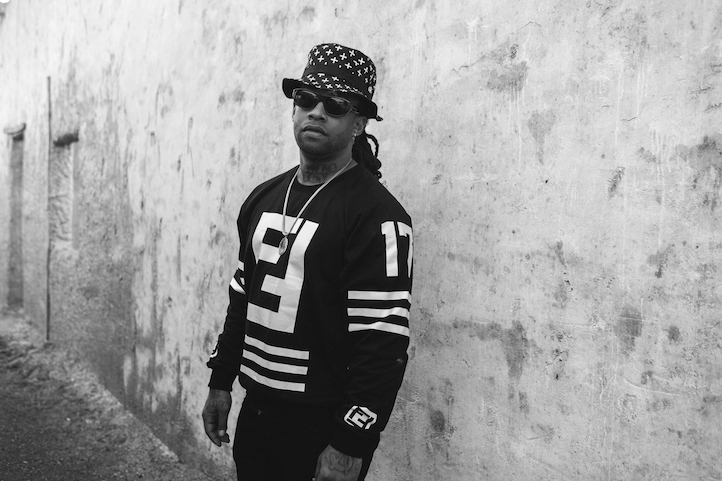 “Turning up” and “ratchetness” have become two very prevalent motifs in urban music as of late. One artist whose music has been synonymous with both is Ty Dolla $ign. His love for and appreciation of partying, women… and more partying and women are on full display with records like “My Cabana” and “Paranoid” and have established him as one of the West Coast’s rising stars. Many may not know, though, that he’s not just an aficionado of all things ratchet, but that he’s also a talented songwriter and producer, who has co-written or produced songs like Snoop Dogg and Wiz Khalifia‘s hit “Young, Wild & Free” and Chris Brown’s latest “Loyal.” The Grammy-nominated singer, writer, producer and turn up king recently spoke with Life+Times about writing Chris Brown’s “Loyal,” why writing and producing comes so natural for him and his plans to expand beyond his usual subject matter with his upcoming debut, Free TC.

Life+Times: You’re a producer, who plays multiple instruments and a songwriter. What comes more naturally for you, producing or writing?
Ty Dolla $ign: The whole thing comes natural, because I’ve been doing this for so long, but when I step outside of what I’m use to doing it can be a little weird. That’s because of me damn near chaining myself to this sound that I’m doing. It can be a challenge sometimes when I step outside of it.

L+T: How does it become a challenge?
Ty$: Mike Will just sent me a whole bunch of beats and I was trying to write to them. I was trying to get into that pocket. You’re use to hearing Future and a few others rock those Mike Will beats, so automatically your mind goes to those kinds of rhythms. I found myself like, “Wait a minute, I’m Ty Dolla $ign. I have to do my shit.” I’m just trying to figure out how to make my shit go on everybody else’s beats and how to step into everybody else’s world.

L+T: How did you know “Loyal” would be a good fit for Chris Brown?
Ty$: I wrote “Loyal” for me. The producer played it for Chris’s people and Chris ended up cutting it. I didn’t even know about it until like the day before they released it.

L+T: How did it feel knowing that Chris liked the record so much?
Ty$: It just feels good that people are taking notice and fucking with what I’m doing, especially a superstar like him. I’m honored that he’d even wanted to fuck with me. After “Loyal,” me and Chris were like let’s just do more shit. We worked on some more stuff for his next project.

L+T: Was there a specific situation that inspired “Loyal”?
Ty$: That was about one of my bitches. Not even one, but about all of these beautiful women [laughs].

L+T: You also co-wrote Trey Songz’s “Ordinary.” How was it working with Trey?
Ty$: Trey and I wrote that together. That dude right there is talented as fuck. He gets on the computer, pulls up the mic and records his damn self. He does all the backgrounds and he writes. He freestyles just like I do it.

L+T: What other artists have you been writing or producing for?
Ty$: I’m on YG’s album. We did “Sorry Mama” and I produced “Really Be (Smokin N Drinkin).” I did some stuff for 2 Chainz. DJ Mustard’s next single off his EP features me and 2 Chainz. Chainz destroyed that motherfucker. I’m on Meek Mill’s next single called “Don’t Know.”

L+T: Both “Loyal” and “Ordinary” have that Ty Dolla $ign-ish vibe and sound. Was the plan when you started working on your first mixtapes to carve out your own lane?
Ty$: I always had my own sound and so did everyone around me. My whole team has been original and against being like all the copycats who sound like everybody else. Trying to come up with my own shit was definitely my intention. Now you hear a lot of people try to sound like what I’ve been doing. Same thing with YG. It’s like everybody out the West is trying to rap like YG.

L+T: You’re gearing up to release your debut album. How will the album differentiate from your previous projects?
Ty$: There’s going to be more quality. The album is called Free TC. It’s going to still be me. I’m going to still talk my shit, but it’s going to be a little bit different as far as subject matter. I, of course will have the songs about fucking, turning up, partying and fucking with these different girls, but there’s also going to be that uplifting shit and some more serious shit. I’m just excited about it.

L+T: The Weeknd previewed his remix to “Or Nah.” Is it true that Drake will also be featured on the official remix?
Ty$: I’m just waiting to see what happens. I think Drake’s going to do it though. The Weeknd definitely killed his part. The people are definitely fucking with it. Shout out to all the people who are fucking with it.

L+T: What’s next for Ty Dolla $ign?
Ty$: I’m about to go out on the “Beach House Tour.” This is my first headlining tour. In May, I’m going on Wiz Khalifa’s tour and right after that the Weeknd and I are doing something together. I feel like I was running this long ass race and now I just scored first place and got my award. I feel good. I just want to keep it going and keep winning these races [laughs].