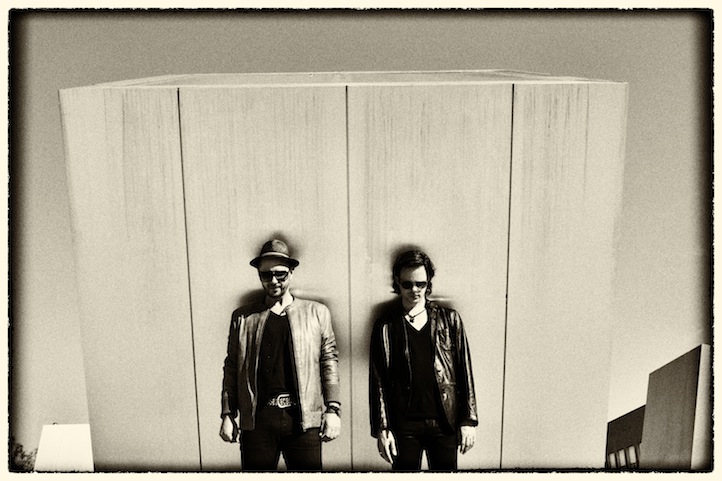 Last Friday marked the release of Booka Shade’s (Walter Merziger and Arno Kammermeier) fifth album, EVE. The album’s jazzy undertones pair seamlessly with the deep house sounds from start to finish. EVE is the mature older brother to the many albums currently released in the electronic music world – many of which thrive off of imitation and fleeting movements. “Booka Shade – we just do our thing. For a while people would ask what Booka Shade is and we always said ‘science fiction house,’” Arno said. The strength in Booka Shade’s production skills and longevity lies in the duo’s strong identity awareness. “Trends come and go, but I think what will last are great songs at the end of the day. The beats may change, but a good song is a good song,” Arno added. This month the Berliners kick off the European leg of their tour in support of their latest album. Fresh off the heels of Amsterdam Dance Event, Arno speaks to us about the significance of EVE to Booka Shade.

Life + Times: For your latest album, EVE, you guys recorded it at EVE Studios in London. I don’t want to assume anything, but is that how you came up with the name of the album?
Arno Kammermeier: Yeah, it was a couple of things that coincided and just worked out very well. The thing with the album – it’s our fifth album – with a certain body of work that we have now throughout the last ten years that we’ve done Booka Shade – you come to the point especially as a mostly instrumental artist – you almost have to redefine yourself as you don’t have a singer. With a singer it’s very easy because if you change the style – the voice of the singer will always keep it together somehow; if he has a remarkable voice. You can do a lot of changes in the music. The singer will make it recognizable for the audience. Now, with an instrumental act like we are most of the time, we had to look for a different language in a way to tell the story and bring our Booka Shade songs across in order to not repeat ourselves. We had to find some new ways. We don’t want to repeat ourselves. After two years into the album production, we realized that we weren’t happy at all with what we had so far. There were some good songs, but it just didn’t work – it didn’t come together. So, we realized that we had to change something in the way that we work. Walter, my production partner, he read something in an English production magazine for music. He read about this studio just outside of Manchester called EVE. What was so interesting for us was that there is all of this crazy equipment in the studio – a lot of reverb, a lot of percussion we wanted to record live, and all kinds of strange gadgets. We thought, ‘Hey! That’s probably fun to go there and record.’ So, we booked the studio and took the demos that we had just recorded, recorded, recorded. Then, [we] took the recordings out to Berlin. Still there was a lot of cutting up and making it sound modern even though it was a complete performance. You want to slice things up and make it a little bit crazy. These recordings were such an inspiration for us, that it basically saved the whole production. When we looked for an album title, first we said a different title and then we said EVE was the appropriate title for the album. At the same time the graphic designer [studio], La Boca, came up with the artwork. There’s this girl – you probably have seen her – that’s on the artwork. We asked ourselves, “Who could this girl be?” Then, we said her name would probably be “Eve.” So, a couple of things fell into place and it felt right. There is the name.

L+T: Wow. It sounds like EVE Studios was a playground.
AK: Oh yeah, absolutely! A big playground for grown-up boys with toys. (Laughs) It was a lot of fun. We felt so much like a band again, you know. We could just record and perform. There were engineers that took care of the rest and we just did the creative part – and that felt amazing and very free. That was the real turning point.

L+T: You and Walter have produced music for years. Would you say producing this album in EVE Studios was a new learning curve for you?
AK: We learned that it makes sense to break up the usual method. You always tend to find a certain way to do things. To shake everything up and move into a different environment can be very helpful and it can wake you up and make you aware of new things that you want to try out. So yeah, that was definitely something we took home. Also, with Booka Shade we do electronic dance music or club music in a way that we are musicians. The way we present the music live is very much about the performance. We always look for ways on how to bring this across. I believe the album has a lot more depth, sound [and] the layers are much richer. That’s a step forward in the production as well. It was a great benefit to do this.

L+T: Since we are on the subject of progress and keeping things fresh, we have to address the evolution of dance music. What do you think will help keep the genre alive and exciting for not only the fans, but for you as producers?
AK: It’s always interesting to see what other people come up with. I remember vividly – I think it was in 2011 – we did a tour throughout the States called Identity. It was the first time a dance festival was organized and it used to travel across the country. I think they did it twice. Once in 2011 and 2012 – we were on the first one. It was an amazing experience. We started on the East Coast and went all the way through Texas and Albuquerque, and then up the West Coast. During this time, the American version of dubstep hit the audience big time. It just blew up at that time. We could see this and experience this. That was also very inspiring to see other versions of electronic music and it hits the young people in a way that they couldn’t be reached before. It (Identity) helped you to see who you are and what you stand for. Booka Shade is more for a slower beat, a little bit of house beat, it’s a more intimate [and] emotional version of techno. It told us that we have to find who we are and this is what makes us special. That was a good experience because you always have these new things coming, but the most incredible thing is when you stick to who you are and get those influences, put it into your own universe, but remain yourself – and not try to be a new dubstep guy or something.