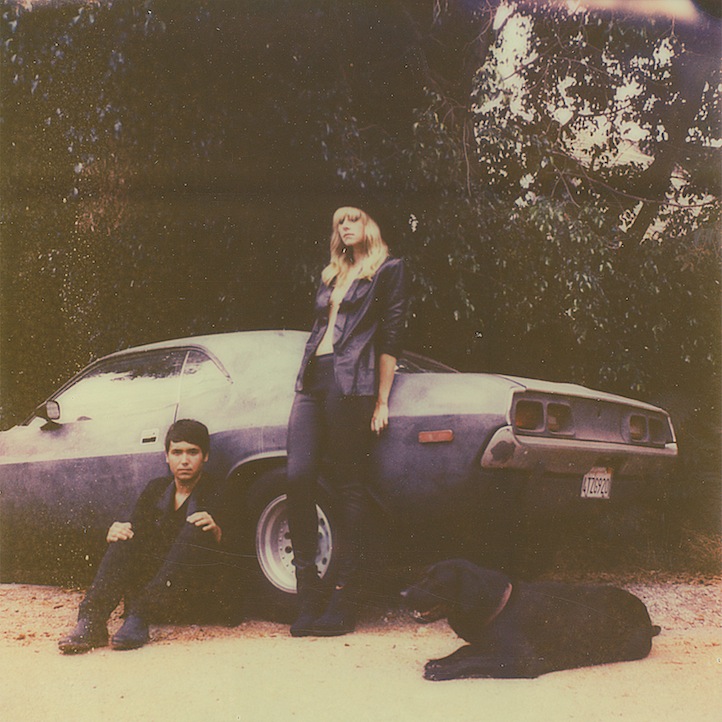 “We started out in Salt Lake City. We did a Colorado Springs radio thing, then Denver. That was all in one day. Then, Minneapolis, Chicago and Columbus, Ohio to here. It was a lot of long drives,” stated Erica Driscoll, the effervescent vocalist of the brother-sister electro rock duo, Blondfire. “Here” is a multilevel H&M store in bustling Manhattan during the whirlwind week of the CMJ Music Marathon. Despite the rain and fatigue from being on the road, Erica and her bandmates eagerly awaited to hit the stage and do what they love most: performing.  But before hitting the stage,  the songstress tells Life + Times about their fascination with ‘80s music and how their Brazilian roots has played a part in the creation of their own standalone sound.

Life + Times: I admire the fact that you fuse electronica and alt rock together. Can you tell me what influenced you and your brother to create music from this combination?
Erica Driscoll: I think it’s from our influences from when we first started playing music. We’re both into ‘80s stuff. I think a lot of bands that influenced us would be The Smiths, Depeche Mode, and New Order. Oh, and Siouxsie and the Banshees too. You’re always taking from your influences, but you create your own thing.

L+T: Since you both share the same influences, is the song writing process done together?
ED: We mostly write the songs together. Sometimes we’ll have ideas and bring them. We record and write at the same time a lot of the times. We’ll be in our little studio and my brother will come up with a drum beat and we’ll start playing little riffs on keyboards or guitar riffs. We’ll just switch instruments until we get something cool and something that sounds inspiring. Sometimes a song will be inspired by coming up with a cool title or seeing a word. It’s like putting together a puzzle almost.

L+T: Growing up you both listened to a lot of Brazilian musicians, correct?
ED: Yeah, definitely. Like João Gilberto and all the classic bossa nova.

L+T: Do you pull some of that Brazilian sound into your music as well?
ED: I think it’s in there in our melodies and also the rhythms. They’re not the standard drum beats sometimes that Bruce comes up with. We’re definitely influenced by that. We grew up listening to all of that. I love it. I love bossa nova. It’s the most relaxing, sexy, bittersweet. It’s amazing. It’s happy and sad at the same time.

L+T: Your EP is being released November 6th. Could you tell me the name of it and what listeners can expect?
ED: The EP is called Where The Kids Are. The full album will be called Young Heart and that comes out at the beginning of the year. We’ll be touring a lot more to promote that.

L+T: That’s awesome. Congratulations! On a random note, what are you currently listening to on your iPod?
ED: Honestly, I’ve been listening to so much of our own music lately. (Laughs) We are mixing and mastering our album. I’ve been totally neglecting listening to other music. On the tour, we’ve been having a good time matching the soundtrack to where we’ve been driving. We did Bruce Springsteen’s Nebraska in the middle of nowhere…Neil Young and Tom Petty, a lot of classic stuff when we’re driving. [We were] matching Johnny Cash to the scenery.

L+T: You and your brother have both been involved in music for years. Over time, how do you feel you have progressed as an artist?
ED: Well, we have definitely grown as songwriters and producers along the way. Listening back to some of our older songs, some of them I still love, but you can hear the recordings got better as we went along. We’ve been doing this since we were so young. We had recording at my parent’s house. We had a little studio set up in their basement and had really basic gear and started writing and recording. We’ve been doing it for so long. It has progressed a lot and developed a lot more.

L+T: How did you meet the bandmates?
ED: Our guitar player, Steve, we actually found on Craigslist. He had only been living in L.A. for like five months at that point. We put in that we were looking for a guitar player. He saw the post and reached out. My brother met up with him before I even met him. I was all skeptical. Usually it takes such a long time to find people that fit the vibe of the music and that you can get along with. Then, when I met Steve I was like, ‘Oh! This guy is totally cool.’ Our drummer and bass player were actually recommended to us. My brother had known them when he lived in New York. First of all, they are amazing musicians, but just really cool people, fun and positive. We just laugh the whole time we’re on the road pretty much. We get really tired, but everyone still has a good time.

L+T: Since you have such a fun background in music and you listen to just about everything, who would you want to work with past or present?
ED: Depeche Mode and anyone who inspired me growing up, like, Johnny Marr, Morrissey or New Order.

L+T: I love Bow Wow Wow.
ED: Oh yeah, awesome! I love that time period in music. It was fun and poppy, but it was still interesting and made you feel something. The pop now is fun, but there’s no connection there. The ‘80s stuff makes me feel emotion. At the same time, it’s just so catchy. I can relate to that so much.

L+T: Me too! I am a fan of the catchy ‘80s songs with ambiguous and not so ambiguous muses. What is the ideology behind the songs you create?
ED: I don’t really know what specifically inspires me. You’ll just read a word sometimes and will think, ‘That would be a cool song.’ If we’re in the studio, even keyboard sounds influence me. It can be the same chords that you would be playing on a guitar, but something about that sound will inspire a completely different melody than what I would come up from just playing on the guitar. It’s really fun writing songs. It’s fun when you’re done writing a song and you have something that didn’t exist before.

L+T: So, was “Where The Kids Are” inspired by a word or a guitar chord?
ED: My brother programmed this drum beat and he got this dirty bass kind of sound and I started coming up with a harmony, then words just started coming and I started with “parties in the wilderness of life.” It was like putting a puzzle together. We wrote that one very fast. It was completely written and recorded in one day. Sometimes you write a song and it’s almost like someone whispered it in your ear because it just…comes.