The relationship between art and hip-hop has been an organic one since the beginning, dating back to graffiti and the original five elements. While hip-hop’s emphasis on the art aspect has dwindled, Detroit producer/rapper Black Milk, and visual artist Upendo “Pen” Taylor aim to rekindle that flame with their collaborative series Fuzz, Freqs & Colors. The first project, Synth Or Soul drops digitally April 23rd and features 12 instrumental cuts by Black Milk, accompanied by artwork from Taylor.

Here, Black Milk breaks down the project and the inspiration behind it for Life+Times. 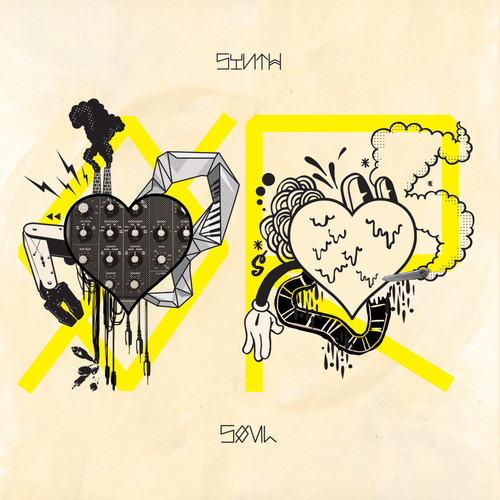 Life+Times: From your end, where did the idea for Synth or Soul come from with one half of the album being synthesizer beats and the other half being soul samples?
Black Milk: Well it stems from being an art project first. Me teaming up with this artist and illustrator named Upendo Taylor, he’s done a lot of different things in a few different types of industries not just music: he’s done a lot of art design for cats like Raphael Saadiq, he owns a clothing company [called] Leroy Jenkins, he did art design for J Dilla – The Shining album cover – he’s done stuff for Nike and Gatorade. So me and him, we’ve been connecting and politicking on some art stuff for the last couple years and we kind of came up with this idea to do an art-meets-beats type thing. He would send me art and I get inspired by what he does, and I sent him little instrumental projects I was doing at the time and he would rock with it. He said he would be painting while he had the music playing in the background. That’s how the concept came up like, “Why don’t we figure out a way to do a project and bring the instrumental world and the art world together and do something kind of different.” It started off like that with me and him meeting up on some art slash instrumental type-stuff. From there, towards the end of last year, I knew Record Store Day would be coming around in a few months, and I thought, “I want to put something out for Record Store Day, let me think of some concepts.” So I’m putting something out on Record Store Day, formatting the music around 12-inch vinyl versus CD or digital release. That’s why it’s only 12 tracks on the project. If I used anymore tracks – when you press to vinyl, quality gets worse the more music you put on it. I was just brainstorming like, “What if I just go back to the basics, where I started sampel-wise musically and showcase some tracks with more of a soul side since I haven’t really touched on a lot of that on my last few projects; and let me touch on the electronic, weird sampling side of things and put it together.” The title just came to my head, Synth Or Soul, I hit up my man Upendo and we went back and forth on art ideas playing with the images of the two hearts – one heart representing a more electronic side of a person or robotic side of music, and the other representing the more human side. That’s how it came about.

L+T: Is that the only artwork that he has for this project?
BM: Yeah. Since this is the first one, we had so much stuff we wanted to get out, we wanted to start it off simple this time around and present people the concept and idea we have. On future projects, we’re definitely gonna get more and more detailed, with more individual, personal pieces. One piece here that only person have or auction off on some real art gallery-style type-shit. We’re gonna do a lot more in the future, but this time around we just wanted to present the idea and present this first project in a more simplistic way. We’re definitely gonna get into more things where he might do one big piece and that piece will be for sale. We’re putting together a Fuzz, Freqs & Colors show – that’s the name of the group, me and him, and the instrumental series: Fuzz, Freqs & Colors – where I’ll be playing instrumental stuff and be up there with my drum machine, turntables and some beats vibing out, while he’s creating live art at whatever venue we’re at at the same time. Also probably having a lot of his pieces set around the venue or art gallery. Just trying to do something different and a little more interesting when it comes to music and art design. We all know that stuff can get monotonous and uninspired sometimes, so we’re trying to do something a little different.

L+T: Talk about the intersection between art and hip-hop. It goes back to the beginning with graffiti, so talk about keeping that relationship alive.
BM: Definitely. In the early stages of hip-hop when shit was fresh, it was a new thing that had people wanting to create, before all of the business got involved and before it became this crazy, billion-dollar industry. The more it became about business, a lot of the art gets missed or put to the side. A lot of the creativity and originality gets pushed to the side or lost. I’m at a point in my career where I feel good to be in a position to do what I want to do creatively and make a living off of it. After doing that for so long, now I want to take it a step further and be one of the cats out here that’s now only doing what he wants to do musically, but also innovating and inspiring other cats to take music and art design a step further, and think outside of the box that we’re used to. As fans, you get used to a certain thing, certain packaging, a certain artists give music to you. When something comes along that’s a little out of the ordinary, it throws you off a little bit. So that’s what I’m about at this point – trying to turn everything upside down.

L+T: Any favorite artists to sample?
BM: I would say the recent single I just dropped, “Sunday’s Best/Monday’s Worst”, those two samples I rock with a lot. The gospel sample at the top, and the soul sample at the end. Of some stuff that’s been out that people probably know, I’d probably say a track like “Losing Out” that I did with Royce Da 5’9 that I did on my Tronic album. Since we’re speaking on favorite artists, the cat Alan Parsons – who I sampled on that track – he’s one of the cats that if I see his name in the record store, or if I see a record by him that I haven’t seen before I would definitely take it to the turntables and check it out because he’s pretty consistent when it comes to finding gems on the albums he put out. He’s definitely one of the cats when it comes to the prog-rock type music.

L+T: How did J. Dilla helped mold your line of thinking as a hip-hop producer?
BM: He’s a producer’s producer. If you make beats – and definitely if you’re a cat that makes beats and your style of production on the sampling side – I feel like almost every cat that has kind of approach when it comes to beat-making looks at J. Dilla as one of the best. Not only is he a talented beatmaker, but the way the cat was 10 steps ahead of everybody all the time was just amazing. He showed you that anything you might have thought was impossible was possible. You can take a style of music, whether it’s rock, reggae, electronic, and flip it and make it your own and make it some funky hip-hop type-shit. That’s what he was good for, like, “Damn, I didn’t even think to go in this section of the record store, but after hearing what he just flipped I need to.” He was that kind of cat, that stuff you wouldn’t think about musically he would do the shit and inspire you to open up your brain, and show all the possibilities of what could be done in hip-hop. There’s not a lot of cats that have done what J. Dilla has done. When you think about hip-hop and live music, cats like The Roots might come to mind; when you think about producers incorporating live music, there wasn’t a lot of cats doing that around the late ’90s, but Dilla came out with an album called Welcome To Detroit where he was incorporating a lot of live instrumentation and crazy, electronic, uptempo shit. At the time, it might have seemed like, “What is this?”, but five years down the line, it’s like, “Oh, I get it now.” He never stayed in the moment or lived in the moment. He was always on to the next, and by the time you as a fan listen to it and love, he’s already on to the next shit. That right there is inspiring, and it puts me in a position when I make music to try to think two steps ahead. Whatever people are enjoying sonically right now, it’s like, “How can I take a little bit of that and flip it and be on to the next that people aren’t really hip to yet?” That’s how he influenced me.

Synth Or Soul is available here.