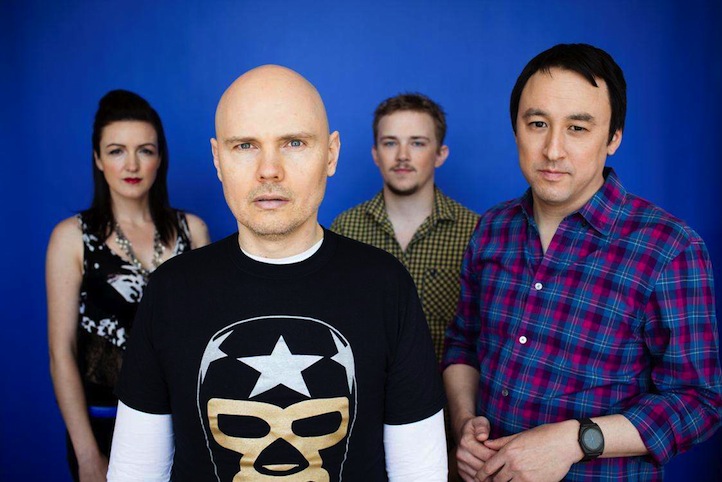 “We’re excited. This is obviously a big show for us,” said singer/guitarist Billy Corgan of The Smashing Pumpkins in regards to their last show of their worldwide tour at Brooklyn’s Barclays Center on Monday night. Despite the postponement of the initial October 31st date that was caused by Hurricane Sandy, Corgan, guitarist Jeff Schroeder, drummer Mike Byrne, bassist Nicole Fiorentino and fans came to the venue 100% thrilled to take part in what was labeled as an experience, rather than an band set. The tour was in support of their seventh latest album, Oceania, which was released this summer. The first half of the set consisted of a performance of the entire Oceania album and the second portion of their set was filled with classics such as the angst charged, “Zero,” the Grammy Award winning track, “Bullet With Butterfly Wings” and the nostalgic “Tonight, Tonight.” With the latest remastered reissue of one of their most notable records, 1995’s double album Mellon Collie and the Infinite Sadness released last week and talks of a new project set for 2013, it is no question that The Smashing Pumpkins have stood the test of time despite the band’s past turbulence and hiatus. Here, we reflect with Corgan in regards to the Pumpkin’s future and values that have molded his personal growth as a musician.

Life+Times: How was the tour?
Billy Corgan: Really good. We made a really critical decision to reinforce that the Pumpkins are really about new music and not take on this “greatest hits” mentality. That’s been very successful. I think we’ve really turned the corner. It was a big gamble, but the reception publicly has been great. These are probably the best reviews I’ve ever gotten in my entire musical life. It does reinforce that you can make artistic decisions in a very material culture and still be successful if you’re good at what you do.

L+T: Absolutely. One thing I’ve always admired about your approach to songwriting whether it’s with symbolism or the entire composition of the song, you haven’t lost your identity. How have you been able to accept this challenge of producing new records, but without losing your own voice?
BC: It’s been really difficult. We’ve had steady erosion in the alternative music community. It’s become less and less about being different and more and more about being pop. I grew up around pop music, I’ve always loved pop music, but I’ve always seen a clear distinction between the alternative world and the pop world. Their styles are based on different values. One is a celebration of a moment, which is just fine and one is a celebration of a deeper set of different principles and of course at different times there’s crossover. Growing up in an alternative world with a father who was very particular about what he considered as good music, seeing alternative basically just turn into pop music has been a very strange journey. Our popularity came from being different and being strong in what we did and not being like other people. At some point it’s weird because it’s almost like you start getting pressured to kind of be either an imitation of yourself or an imitation of someone else because that’s the new definition of what success is. It’s strange. I think it’s just trusting what you feel even if what you feel doesn’t make sense to you. A lot of things I’ve done, they don’t make any sense to me other than I just feel inspired that that’s the direction I need to go in.

L+T: You said you grew up with pop music. What were some of the artists you particularly listened to before you started out in the band?
BC: My father was always the white guy in the Black and Latino band. I grew up around a lot of R&B, ‘60s and ‘70s style. So, that was sort of my first introduction to Al Green, The Stylistics, Curtis Mayfield and of course what was popular, The Beatles, Rolling Stones and all that stuff. I had a really interesting background…from Motown to studio classic ‘70s heavy metal. It was very varied and really not political. From my father’s perspective it was about what was great. Race wasn’t an issue, background wasn’t an issue, and even the way people looked wasn’t an issue. It was just, “Are you a great musician?”

L+T: That’s a really diverse taste in music. I appreciate that! Now that the tour is wrapped up and Oceania is out, what are your next plans? Are you already working on a new record?
BC: We are starting to plan to make another album and kind of map out how to do that. It is a very challenging atmosphere. It used to be you’d put all your energy in making a record and then you put all the effort into promoting the album by touring. Now, it’s more like we’re in perpetual touring and we’re perpetually making a record. It’s no longer a linear process. Everything has to be planned out way in advance.

L+T: There was a five year gap between the 2007 release (Zeitgeist) and the latest album, Oceania. In that time span, was it strictly spent on recording the album or were you still engaging in the writing process?
BC: I think I approached the 2007 album with a bit of naivety. I just thought we kind of clicked back into what we did and we’d sort of go from there. The reaction from our standpoint was very strange. It wasn’t that they (audience) didn’t like the album, it wasn’t what they wanted. It took me a while to tour enough and think it through enough to realize, “OK, is The Smashing Pumpkins gonna be about what the audience wants or is it gonna be about what I want?” If it’s about what I want, well it’s probably not going to work. If it’s about what they want, it’s definitely not going to work because I’m not going to do it. So, I had to really work through what makes sense to get the Pumpkins into the future on a musical level because in my eyes everything always falls in a single form and then the function comes after that. What kind of shows do you play? What do you say in an interview? Do you bother making videos or not? Other decisions stem from the musical decisions. I didn’t know what to do musically…I didn’t feel like giving two or three years of my life to just have people tell me what I was doing was wrong compared to their version of my past and my future. It was really hard to process all of that information. I had to really get away from it for a little while.

L+T: For the tour, you included an art installation that featured clips of cinematography. Who created the art? Creatively, what made you include this facet into the tour?
BC: We worked with a New York artist named Sean Evans who I met through his work with Roger Waters on The Wall. Sean and I met and he conceptualized. We sent him the album before it came out. He conceptualized something that would run along as the audience was listening and watching us play the album, you would have this visual representation of the album. It doesn’t tell a particular story. It tells a certain story through symbolism. It adds to the atmosphere, but it’s not like we’re playing in front of a television.

L+T: Symbolism has always been your signature from “Bullet With Butterfly Wings” to the lyrics that are expressed in “Pale Horse” off of the latest album: “Caught on a spotlight running out of present tense.” When you compose a song, how important is it to you to include symbolism versus just being full frontal with the emotions?
BC: I think the nice thing about poetic allegory is if you find the right set of images, people can apply their own emotional experiences to what you’re saying without directly having to understand yours. If somebody knows me, those lyrics actually make a lot of sense. If they don’t know me, they’re able to apply their own experiences and take something for themselves and I think that’s what you’re looking for; the right balance of language to arouse a certain level of interpretation, but it is idiosyncratically possessed. I’m not just throwing out words. I am actually fairly shocked, especially when I get far away from the album, like five or ten years later, and I’m surprised at how honest the lyrics are to what I was going through. It is representative for sure.

L+T: From 1991’s Gish right down to this year’s Oceania, in that period of time seven Pumpkins’ albums have been released. Reflecting through the years on your journey as an artist, what would you say is the most valuable lesson you have learned?
BC: The number one thing is that the albums really don’t mean anything to you, meaning me personally, if you don’t put your whole heart into them. They really are snapshots of a particular time. A good album will take you back to the sights and the smells of that era. So, it really takes you putting your whole heart into it and when you don’t it’s really a missed opportunity to document your life in a way that is almost three dimensionally represented. I regret where maybe I didn’t put as much of myself into it because of whatever I was going through in my life. I can see where success is often linked to that sort of dedication. That’s probably the best way I can put it. True success is never about imitation. True success is really finding something in yourself that you’re unfamiliar with and be willing to put it out there. True success is really measured against an offset by what you put of yourself into it, your own individual identity. A lot of times, kids will ask me questions and say, ‘Give me advice. I want to be in the music business. I want to play music.’ If you really look at who the legends are in the music business, they are always individuals. They can be imitated, but they can never be copied. Whether it’s Jimi Hendrix or Robert Smith of The Cure, Led Zeppelin or Al Green, there’s only one. There’s a reason why there’s only one and that’s what true success is. Especially right now in 2012, we have so much imitation, particularly on pop radio. Everybody sounds so much the same; it’s hard to even tell anybody apart. To me, that’s not success. Success is standing on your own ground.