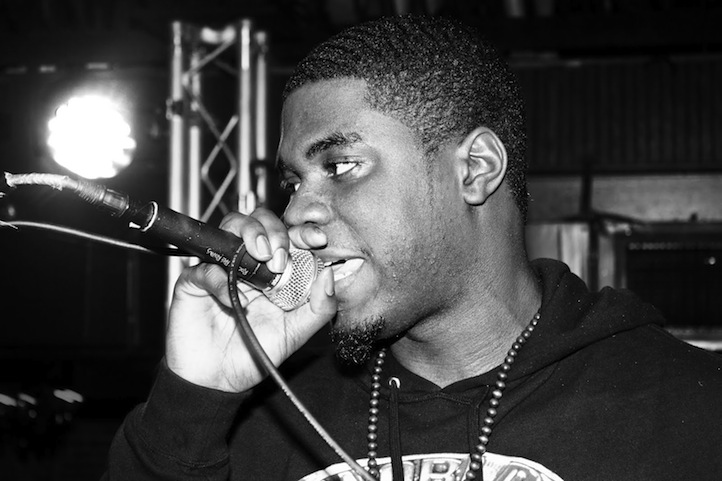 It’s crazy to think that Big K.R.I.T. is just now releasing his debut studio album, Live From the Underground. The Mississippi-bred wordsmith/beatsmith has been pounding the pavement for well over a decade and is just beginning to enjoy the fruits of his labor. The rappers he used to listen to are now asking him for features and the whole experience is surreal. While his dreams are coming true, K.R.I.T. is still a realist though. He’s not out to floss like other rappers – he spends the most money on tattoos (at least they last “4eva N A Day”). On the day of his album dropping, K.R.I.T. caught up with Life+Times to discuss his journey to the top, and how a strong work ethic in spite of everything else is the only real way to win.

Life+Times: Are you as excited as everyone else is to have Live From the Underground finally drop?
Big K.R.I.T.: Aw man, I’m super excited. Actually, it was one of those situations where we were nervous – it’s like an anxious feeling. Because it’s been like twelve years, you know? Like 12-13 years of actually dreaming about doing something like this, and with all the mixtapes, all the tours, all of the promotion – all of that got me to this point right here, man. It’s a lot to be thinking about, but I’m just excited to be doing it. I came to a point in my life where I was like, “Man, will I ever be able to do it?” But I’m here now.

L+T: With the past few projects, they’ve all automatically been labeled as classics. Were you concerned at all that your debut album going to retail might not get that “classic” label?
BK: It’s a whole situation where when it comes to the phrase “classic,” it’s an opinion. Not everybody’s gonna like the music. For the people who do like the music, I’m appreciative of it; they love it, and I pray that everyone will love it. I know it may not be like that, and I came to grips with that with K.R.I.T. Wuz Here. Everybody didn’t like K.R.I.T. Wuz Here or 4eva N A Day. It’s just one of those situations where I get the opportunity to do what I love to do, and I’m reaching people. Lord willin’ there will be at least one song that everybody can take something from. As far as it being retail, I think I did my best in creating the kind of product that people will expect from me. I’ll always be myself, I’ll always have my soul. Even the features aspect, it’s surrounded around people that I felt could reach the sound that I was going for. I also had relationships with them anyway. Being able to have BB King on my first album is overwhelming in itself. On my very first album I got that legend. I’m excited for people to hear it, especially in the car. It’s a lot more bass than hearing it on the computer. I promise.

L+T: You’ve always been really generous with your music, giving it away for free. But even re-releasing it for retail, people bought it. That must be a good feeling, that people had this music for free, but will still buy it for you.
BK: No doubt. I think people understand that in the beginning it’s always about people hearing the music. I would rather give it away to 1,000 and sell it to 100. It’s about the music, and that’s how it’s always gonna be for me. There was a point in time two or three years ago where all I wanted was for people to hear the music. Now I’m at a point where people are hearing the music and that’s exciting enough. Just to be able to do shows and have the people know the songs. It’s like a moment to have a record like “The Vent” be on 106 & Park. These are things that at a certain point in my life, A&R told me couldn’t happen. I’m just excited that there’s room for me in this game.

L+T: Many artists and groups have put messages in their music a la dead prez and The Coup, but they haven’t completely broken into the mainstream. What did you do differently, where your music has a message but still can live in a club and a car?
BK: To be totally honest with you…I have no idea. All of the artists you talked about are extremely talented artists too. I think social networking helps as far as getting the music out to a lot of people. Social networking gave people like me an opportunity to find my fan base and supporters and focus on them. Then they were able to go out and tell people about the music. When artists like dead prez came out, Twitter wasn’t really poppin’ like that or MySpace, so it was different as far as pushing the music. Nowadays with independent artists, Facebook and Twitter are almost a big enough platform to really go out and tour. A lot of these artists now, they could re-drop the songs that they dropped years and they’re gonna gain new fans and gain a whole new attention to their music.

L+T: After over a decade in the game, what has been the most valuable lesson you’ve learned?
BK: Never give up. Always stick with your guns when it comes to your career. Maintain a creative mind frame with your music. You never want to be on stage performing something you don’t believe in. That’s extremely important. Staying true to yourself in general – from radio to meeting people, because when they buy your music they see you’re being yourself. So when they see you out and about, it’s not like you have to put a face on for the camera, because you’ve portrayed yourself through the music.

L+T: What was your first big purchase once the money rolled in?
BK: My Monte Carlo I bought. That was my biggest purchase in a long while. Or you know, shoes and tattoos I spend on. Shout out to Miya Bailey at City Of Ink who does my tattoos. Other than that, I believe in saving. I don’t wild out.

L+T: How do you respond to people who still consider you a new artist?
BK: Man, tell ‘em to download K.R.I.T. Wuz Here, Return of 4eva, and 4eva N Day just so they can get a good idea that I’ve been around, maybe hear the growth in the music. When it comes to certain things as far as the industry, I am a newcomer. On late night television, my first time performing was just recently on [Late Night With] Jimmy Fallon. There are still a lot of things in my career that haven’t happened yet. 2005 was a long time ago, and that’s kinda when I started. It was about putting people onto the music at that point.

L+T: When was the moment you realized this career was actually a thing?
BK: I think when I dropped K.R.I.T. Wuz Here it was the beginning of like, “This is what I’m supposed to be doing.” There was a point in time where I was thinking about quitting, and after we dropped K.R.I.T. Wuz Here, things changed as far as blogs picking up my music after that, people wanting features, and even having other artists that really had been recognizing me or jamming my music. To have Bun B mention my music was amazing to me or Ludacris mentioning it. Having MTV Jams show so much love…all of this off a mixtape. Then when Def Jam reached out through Sha Money, and I ended up signing, that was it. Like, aight we here now.

L+T: When your album was delayed, your response was to release more music, where other artists might get pissed off and complain about it in public. Why did you choose to take the high road?
BK: I understood it was about me still giving the people something to hold them over until I could do the album. It got to the point where we were out touring and, I mean, Return of 4eva – it’s not like it was getting old, but the people wanted new content. I didn’t wanna just do freestyles. Just like we treat all these projects, just in case my album didn’t come out…I have to treat the other projects like they’re albums and shoot videos so we can go on tour and keep pushing it until I do drop my album. The whole reason why this is still going on is based on the reaction from K.R.I.T. Wuz Here and how we treated it. All my projects from here on out, I’m gonna treat them just the same.