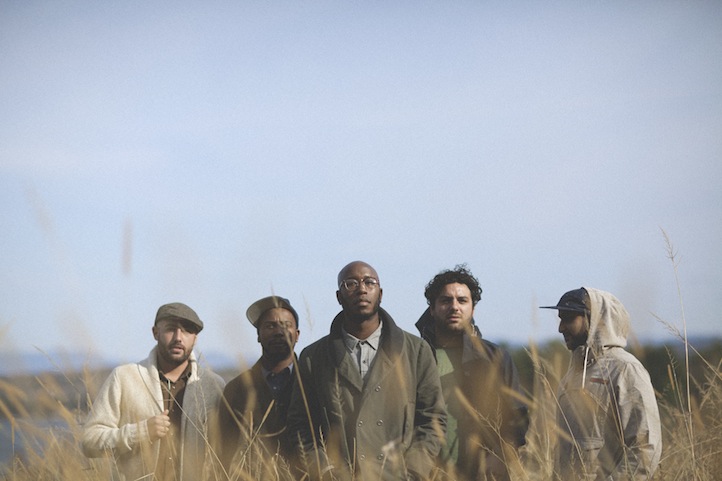 With the increase of cross genre collaborations in today’s music scene, the labeling of musicians to specific genres is becoming the road less travel. Creative direction is to the discretion of the artist that figurative takes the wheel. As for Boston based quintet, Bad Rabbits, they have allowed their heavy alt rock, R&B, and funk backgrounds to drive their sound and live stage presence. Their debut album, American Love (produced by B. Lewis), combines late ‘80s New Jack Swing, the rawness of rock’s pounding drums and guitars with the modernity of indie rock’s mellow melodies. Bad Rabbits is comprised of Fredua Boakye (vocals), Sheel Davé (drums), Salim Akram (guitar), Graham Masser (bass), and Santiago Araujo (guitar). Regarding the band’s eclectic music, guitarist Salim Akram states, “A lot of us grew up being influenced by heavier rock bands such as Deftones and Glassjaw – but also have the traditional R&B like Sly and the Family Stone, Morris Day and the Time. If we had to describe it without throwing every single genre of music into it – we’d just call is post R&B.” With such a diverse fusion of music, it is no wonder the group has shared the stage with a variety of artists ranging from the punk band Bad Brains, soul crooner John Legend, to the legendary Slick Rick. For Bad Rabbits, this is still only the beginning.

Life + Times: What is the difference between American Love and American Dream? You worked with Teddy Riley on the latter, correct?
Salim Akram: Yes, that is correct. We did the record with Teddy Riley. We didn’t necessarily feel like that was the best choice musically to put out. We actually put that record into a vault and spent most of the past year and a half working on American Love to kind of bridge the gap musically between that and the Teddy Riley record. The American Love record is showcasing the band and focusing on the songwriting and all of that kind of stuff.

L+T: I had a chance to see you all live at KahBang Music Festival last year. You shared the same stage as Deftones, but I am also aware that you were on the same roster as Wu-Tang Clan, Common, and a lot of other amazing artists in the past. Do you have any particular favorites?
SA: Collectively among the entire band, I would probably say groups like the Deftones, a band called Every Time I Die and on the more hip-hop side of things, I would say Common. That was actually during inauguration weekend, which was great.

L+T: Going back in time, you guys met in Boston. At what point did you all decide to focus solely on Bad Rabbits?
SA: Around the time we started Bad Rabbits is when we decided to focus on Bad Rabbits. We’ve been playing music together for about 11 years. The first six or seven (years) of it was in another band that we formed throughout college. Unfortunately, that band dissolved musically and kind of interest wise. We used to be a ten piece band. Then, we just hit the reset button and started the whole thing all over. We started focusing on better songwriting. So, Bad Rabbits started at the end of 2008 going into 2009.

L+T: When you work together on the albums, EPs, and shows – who does the songwriting and how do you creatively piece projects together as a group?
SA: We all know our strengths and weaknesses. There’s no main songwriter. We all get in the studio and somebody might contribute to a guitar part or vocal idea or a melody. People’s egos are in check. Having a song is better than having one of my guitar parts blaring in a track or me arguing over whether I think someone should change their bass part.

L+T: What’s the next step after American Love is released in May?
SA: We just want to bring it to the road. If a person has already been a fan of the band, we hope they appreciate the direction. If they haven’t been a fan of the band, they come to a show, do a backtrack of what we’ve done in the past and kind of understand where the band is going.