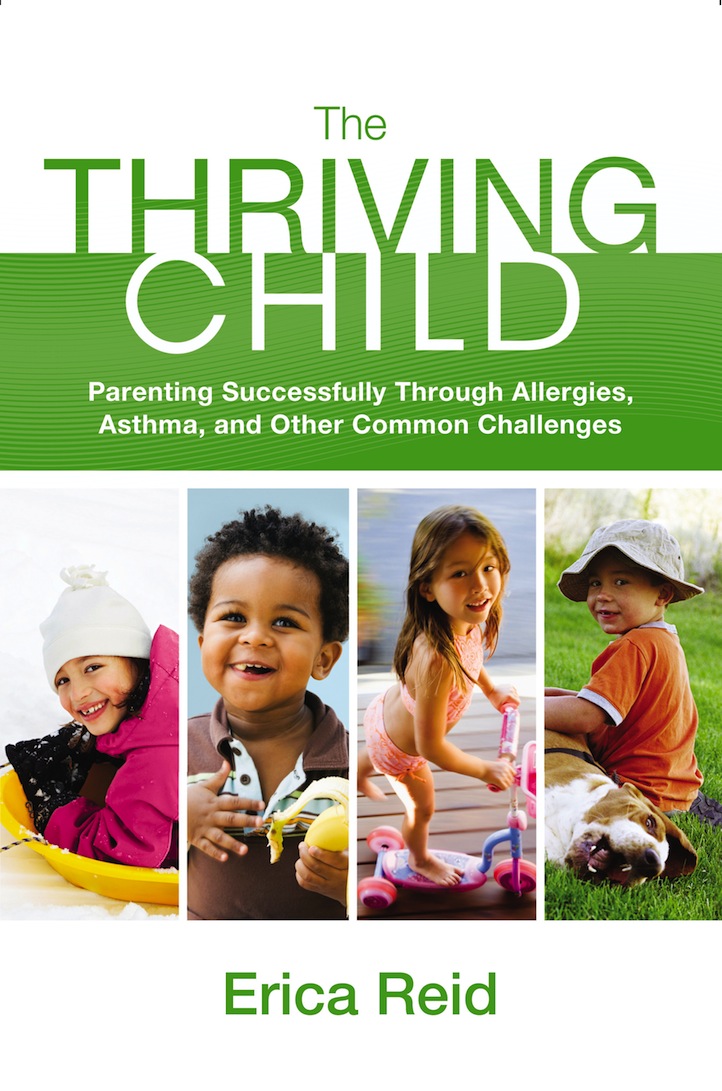 The Thriving Child: Parenting Successfully through Allergies, Asthma and Other Common Challenges was borne out of several life-changing events for its author, Erica Reid. After witnessing her children battle food allergies and other common ailments, she was prompted to reevaluate how her family — including her husband, music empresario Antonio “L.A.” Ried — were approaching food and child-rearing. The outcome is a book that looks at steps to nourish your children, but also presents options on how to help them cope with food allergies and build their creativity through everyday activities. Life+Times caught up with Mrs. Reid to discuss her inspiration, the differences between eating organic and fresh, and how to get your kids to really like vegetables.

Life+Times: What inspired you to write this book?
Erica Reid: [It was] the journey that I was on with my children. I did so much for them and I was like, ‘There’s no way that I’m the only parent out here suffering and clueless and on a journey or searching to do better [for them].’ And I realized I had too much information bottled in me, and I said ‘There’s no way I can keep this for myself and my children.’ I know how much we have reaped and benefited and we have to share it. I had no idea it was going to be a book.

L+T: So then, at what point did you say this should be a book?
ER: My grandfather passed away. And when he passed away, I just remembered getting up one day and saying, ‘I’m going to write a book.’ I remember telling [my husband] L.A. [Reid] that and he looked at me and said, ‘Yeah, right.’ It went in one ear and out the other. I didn’t know what I was doing, so I grabbed my computer and I started purging. I honestly think I was going through an emotional transition and mixing feelings dealing with death. I think that it just transpired to release by writing and expressing and the next thing you know, I developed a book!

L+T: Your book deals with living — particularly, eating — in a holistic fashion. For example, you stress the importance of “eating with the seasons.” Can you explain that?
ER: For food that is grown elsewhere and transported,  you’re not getting it fresh. And you’re not getting it in season. For example, we’re in New York City and pineapples aren’t grown anywhere under the clouds here. They’re grown in certain parts of the world in certain times of the year for a reason. It’s what the food supply is supposed to be for the people of that community, of that Caribbean island. If you look at the Caribbean, it’s tropical. We don’t have the right climate here and by not eating this way, you can have skin problems like eczema. 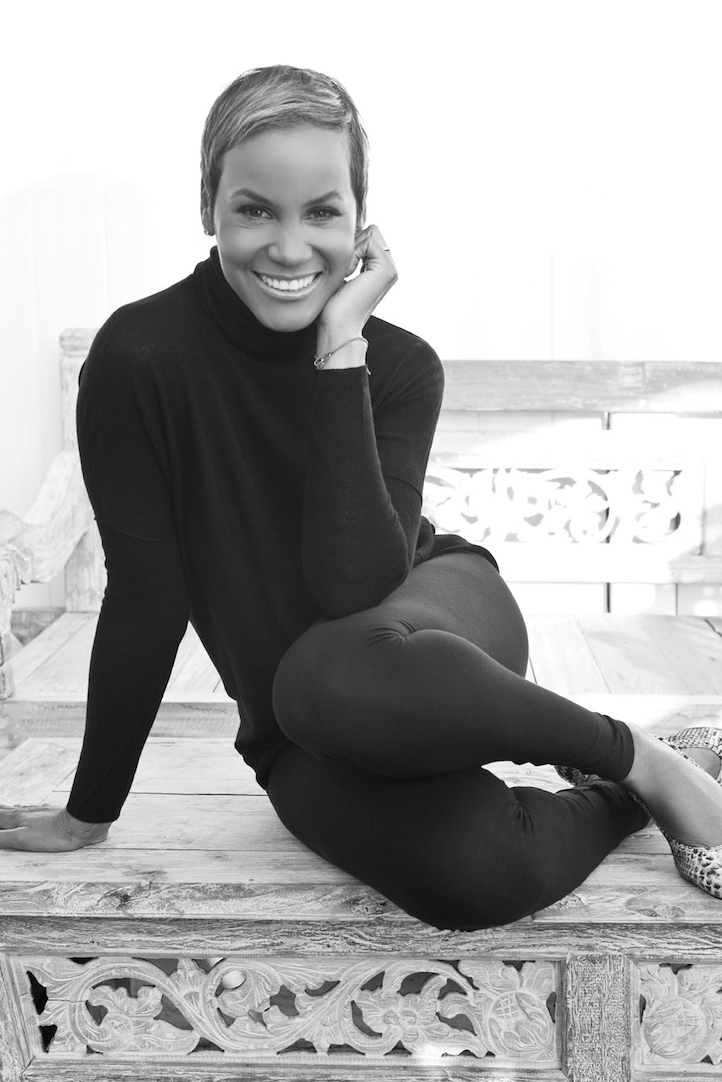 L+T: Another point that you stress is how what your kids eat affects their psychology.
ER: I never relate to food in our home as “weight.” What I try and do is teach my kids, “Why do we eat in the first place?” Food nourishes our bodies, our mind, our spirit and I always say to them: ‘A car cannot keeping going without gas. It may get you to that point, but barely. Your body can shut down. It is a machine and it requires certain things to keep it maintained.’ Mentally, when you consume certain foods, it affects your moods. It takes you up, down, and it can cause a chemical imbalance depending on what you’re consuming. So many children are misdiagnosed today because of food. We’re feeding them so much sugar and we think because we’re not giving it to them in soda or we don’t have the actual white granulated sugar…if you look on the back [labels] of pretty much everything and you add it all up, you’d be surprised at how many tablespoons or cups you’ve given to your kids or even yourself in one day.

L+T: Like what?
ER: Yogurt. You see so many ads about getting the right amount of probiotics, but how much probiotic or active cultures is really in the yogurt and not loaded with sugar? Certain foods can get away with just listing a little bit of an ingredient or saying it’s all organic and having other things.

L+T: Eating organic also comes up often. How would you suggest that someone could do that if organic markets aren’t readily available?
ER: Organic is expensive. Period. It doesn’t matter where you are, it comes with a price tag. Look at what you’re consciously purchasing that is organic. For example, a banana — you don’t eat the skin, so does it matter if that’s organic? I don’t think so. I would suggest eating healthier, more green, leafy vegetables and more fruits instead of things that are processed. So, I’m not saying that you have to have organic. I think you can have a healthy, balanced, clean meal that’s not organic rather then eating something that is organic, but full of sugar, especially when you don’t know how much of it is organic. You have to look at yourself and family and financial situation and figure what you want to do. Health is not a luxury and in our country, we need to see what it is that takes precedent. It’s not always easy, but if you want organic, look in the frozen section –- get some frozen organic peas. Do the best you can. Some of us are going to McDonald’s after work, so weigh your options. Don’t get the full meal, the shake, the drink, the French fries. I’d say get the French fries and make your own chicken nuggets and steam some vegetables, like kale or broccoli.

L+T: You really like kale…
ER: I love kale! It’s how I get my calcium. We’re taught that you have to get your calcium from milk from a cow but it’s found in green, leafy vegetables and other items.

L+T: Kids don’t grow up loving kale and broccoli, but somehow you’ve convinced your kids to enjoy it. How?
ER: It’s called respect and you recognize that children, like adults, have taste buds. It’s not about conning them or presenting it in pretty way — you have to be good about presenting it in a tasty way. I’ll tell you what did it [for my kids]: it was lemon. My kids got into being able to take a lemon and be self-sufficient and independent and squeeze it onto their fish, broccoli, etc. And then we invested in a lemon squeezer and they had a ball with that!

L+T: You also talk about letting your children dress themselves to express creativity.
ER: Dressing yourself is creative expression. They have a vision. They see these clothing items and they put together these things based on how they feel. You better believe that my kids have walked out in…you name it. My son has dressed in character costumes in 100-degree days as Darth Vader or as Michael Jackson and I let him go out like that because I don’t want them to think that what they creatively put together has something wrong with it. What I had to teach was there’s a time and a place where that’s appropriate. If we were going to a fancy restaurant, you cannot wear something like that, and then I explain why.

L+T: If your child follows a well-balanced, healthy diet and nurtures creativity, how does that end up affecting society overall?
ER: My daughter will come home and say, ‘Oh my god, the kids in class wouldn’t sit down and they were giving the teacher a hard time. They ate so much sugar at lunch.’ She will make a comment because she has seen the effect of what food can do and how it can alter your mood. I’ve made our home the place where we can eat to sustain ourselves.