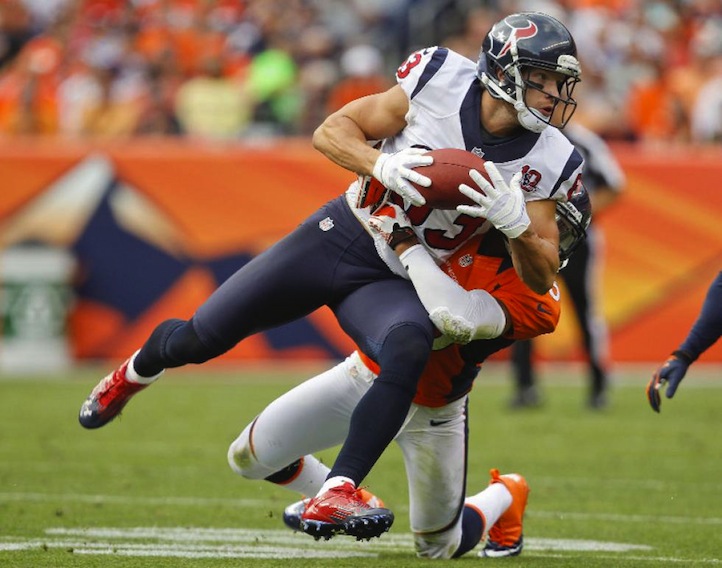 After experts and fans, alike, anointed the San Francisco 49ers as the best team in the NFL, the lowly Minnesota Vikings upset the Niners, on Sunday. With their loss, now, there are only three teams that remain undefeated (at 3-0) –and vying for the top spot in the standings– the Arizona Cardinals, the Atlanta Falcons and the Houston Texans. Although the Cardinals defense has only allowed two touchdowns this season, and the Falcons are flying high in the disappointing NFC South, after Week 3, the well-balanced Texans have emerged as the team to beat in the league.

As the only undefeated team in the AFC, the Texans are 3-0 for the first time in the franchise’s 11-season history. After many viewed their week 1 and 2 victories against the Miami Dolphins and Jacksonville Jaguars, respectively, as easy wins, Houston traveled to the Mile High and beat Peyton Manning and the Denver Broncos, 31-25, in a statement game on the road in Week 3. The final score isn’t indicative of the beating Texans’ quarterback Matt Schaub’s 290 yards and his four touchdowns put on the Broncos confused defense, but the end result is still the same, as Houston defeated Manning for only the third time in 19 attempts– and for the first time ever in a road game.

Under defensive coordinator Wade Phillips, the Texans have one of the top defenses in the league. As many discovered after their matchup against the Broncos in Week 3, the Texans’ defense is really without any limitations. Manning found out most of Sunday afternoon, that throwing against second-year defensive end dynamo J.J. Watt (who finished with 2 ½ sacks and is the early frontrunner for defensive player of the year) and a strong Texan pass rush into a deep secondary, with great coverage safeties –and the second-best corner in the game, in Johnathan Joseph– is no easy feat for any quarterback. Houston attacked the Broncos QB with a five-man rush on 16 of his dropbacks, forcing Manning –who had completed 65 percent of his throws against a five-man rush in Denver’s first two games– to throw a dismal 6-for-16 for 73 yards under such pressure on Sunday.

According to ESPN’s Stats and Info, Houston was 2-16 all-time against the future first ballot hall of famer, 1-8 all-time in Week 3 games, and 0-2 when trying to improve to 3-0 the last two seasons. Because the Texans are so dominant on the defensive end, they can be a run-first operation on offense. And no team in the NFL is as good at running the pill as the Texans, with their zone blocking scheme and great pair of running backs. Running back Arian Foster finished with 105 yards on 25 carries and scored a TD for the seventh consecutive game, though this one came on a catch.

Much of Houston’s success is attributed to the stellar play of Schaub. Critics, who question his toughness, may want to reassess their critique, as the Texans’ QB returned to the game after being crushed by a pair of blitzing Broncos in the third quarter, that lacerated and took a piece of his ear. This Houston squad is beyond tough. They’re durable and have the right pieces in place to buck into Week 7 undefeated. They are exceptional at controlling games early and getting teams to play their brand of football. It maybe premature to discuss if they can sweep through the regular season, but it is a possible notion early on.

The Texans true test will come in Week 6 and 7 when they play host to the Green Bay Packers and the Baltimore Ravens. If they managed to stay healthy and Schaub continues to throw the football well, and Phillips keeps his defensive attacking like rabid dogs, the Texans will be the team to beat and legitimate Super Bowl contenders.