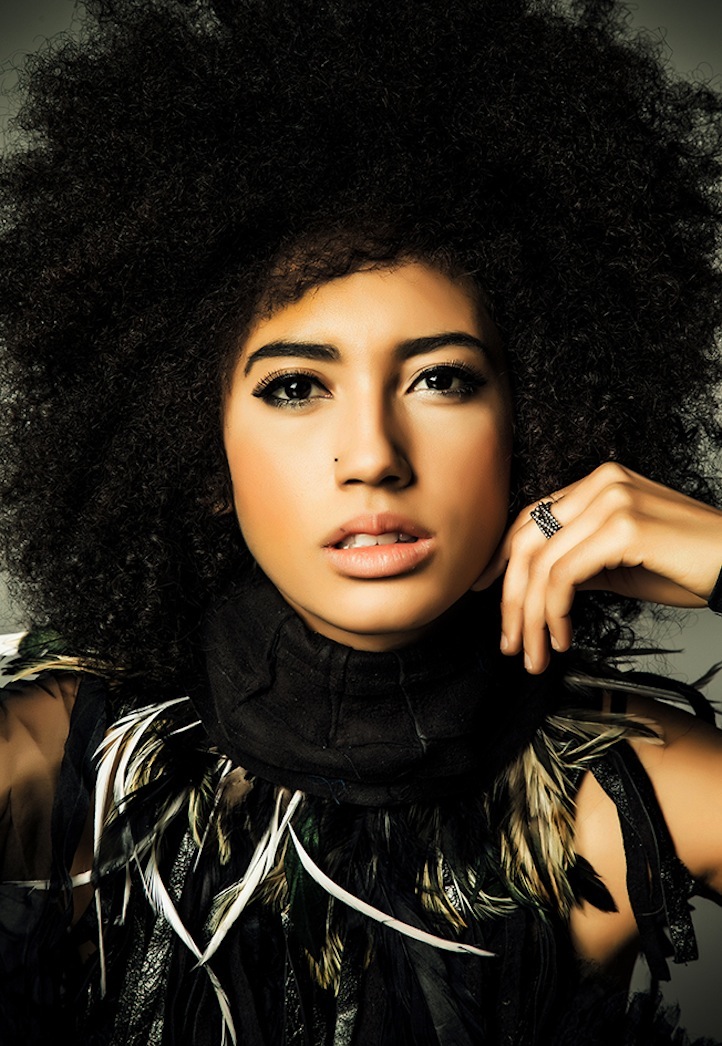 Andy Allo seems like a breath of fresh air. Her striking looks –  blown out, curly-haired afro coupled with her radiant smile, would quickly lead one to that conclusion. Hearing her story, and listening to her music confirm that notion. The Cameroon native quietly put out her debut album, UnFresh,  in 2009. Contrary to the album title, it  absolutely was fresh, and in the time between her debut album and its follow-up project, she crossed paths with the perfect person to help stimulate her development: Prince. Yes, that Prince.

In 2011, Allo joined Prince’s acclaimed New Power Generation band as a guitarist and vocalist. A hell of an opportunity to say the least, and one that Allo appears be making the most of. Working and touring with Prince and NPG over the last year, she’s now preparing the November 20th release of her sophomore solo album, Superconductor. Listening to the first single, “People Pleaser” (which features Maceo Parker and Trombone Shorty) and other album teasers, the progression is clear, delving into R&B, pop, soul, funk and more. Prince’s influence is apparent (he executive produced the album and co-wrote three songs), but Allo’s talent still shines bright. Life+Times talked to Allo about Superconductor, the funk, and working with the legend that is Prince.

L+T: Where  have you been since coming to the U.S.?
Andy Allo: I moved to Sacramento so that’s where I grew up [in America] mostly. Then I moved to Los Angeles, so I spent some time [there]. Recently, I’ve been spending time in New York, so I really am liking that city. And then obviously, spending time in Minnesota, that’s where we have band rehearsals and that’s where most of Superconductor was recorded, at [Prince’s] Paisley Park.

L+T: Talk about coming to America from Cameroon, and your experience changing from one culture to another.
AA: It was really a culture shock. I had visited during summers with my mom, but there’s nothing like moving to a whole different society, so I had to get acclimated to the different customs and all of the holidays that are celebrated. The way words were spoken. So I actually learned the [American] accent because there’s different ways words are said here [in America], and I wanted to fit in so I learned how everyone was talking.

L+T: Was that when you were first exposed to funk and Prince’s music?
AA: I think I was exposed to funk when I was very little from artists like Manu Dibango, but it was like an African funk. I didn’t really get exposed to Prince’s music until I moved to the U.S., and even years later through a next door neighbor who was a huge fan and would give me records of his, and friends who said, “You have to see Purple Rain, this is a cult classic, you have to see it.” Even then it didn’t register. I knew that he was a legend and I knew he was someone who had contributed immensely to music, so it wasn’t until later [in my life] that I was introduced to Prince and other funk artists like Sly and The Family Stone.

L+T: Was there anything in particular about their music that jumped out at you?
AA: Yes, the arrangements and the horns! When you listen to Tower of Power, their horn section, and the way the crowd couldn’t help themselves but to get into it and to sing along, that was incredible.

L+T: What aspects of Cameroonian music and culture do you think come across or have helped to mold your music?
AA: I think the aspect of having a message. A lot of Cameroonian and African music has a message, and that’s what I’ve always tried to impart when it comes to my music. So with [my first album] UnFresh, it was being yourself. You don’t have to do everything everyone is doing in order to be fresh, you can be “unfresh” which is equally as cool. With Superconductor, we all have an energy within us, and if we learn how to harness that energy then we can be a Superconductor, and we can move things and change things. It’s like what Tracy Chapman said, “Talking about a revolution.” I think that’s what music is missing: you gotta have a message, you gotta say let’s change or let’s celebrate something. Even JAY Z and Alicia Keys singing about New York [on “Empire State of Mind”], that had a message. That made people say, “Wow, yeah, I love New York. This is the city.” That’s what music is about for me and that’s what I want my music to be.

L+T: How was it for you adapting to funk, Prince’s music and New Power Generation  given the way that you grew up learning music?
AA: Well I’m grateful that I grew up in Cameroon because I was exposed to such different sounding music. So when I came to the U.S., I think it prepared me to be open to all types of music. Being in Cameroon, my mom would bring back all types of records from the U.S., so I also grew up listening to Dolly Parton and Bob Marley. There was such a wide array of genres that I was exposed to since I was little, so I’ve always been open to listening to all types of music. But funk is a whole other beast. I’m still learning it and my African roots have helped me a little bit, but I’m still getting my funk down [laughs].

L+T: What is Alter.Hip.Soul?
AA: That is an alternative take on hip-hop and soul. I couldn’t figure out what genre my first album UnFresh was and I felt that it incorporated various genres, and I didn’t like that you had to pick one thing. I don’t think music is one thing, it incorporates a little bit of everything and you shouldn’t label yourself.

L+T: Are there any other artists who make music you think qualifies as Alter.Hip.Soul, or is that just your thing?
AA: Alter.Hip.Soul was specifically for UnFresh. An artist that might fall under that would probably be Janelle Monae. I think her music incorporates a variety of genres and that’s what makes it so cool.

L+T: How has playing with NPG helped you evolve as an artist?
AA: There’s no words to categorize how much I’ve learned and how much I’ve changed. It’s a challenge, it’s always a challenge, and being surrounded by those musicians, the standard is so high. They’re the motivation for me. It’s motivated me to be the best at whatever I’m trying to do, so I’m constantly thinking of how I can do better. There’s three things that I wake up and think about everyday: the November 20th release of Superconductor, practice guitar and to eat.

L+T: “People Pleaser,” the first single from the new album features Maceo Parker. What was it like working with him?
AA: Maceo Parker is my musical father and he has actually adopted me which I’m quite excited about [laughs]. Working with him, I can’t even explain. He’s incredible, the way that he uses notes to communicate and there’s always a surprise. So having him be on “People Pleaser” is just amazing. That happened by way of Prince, going on tour with him, and Maceo joined us on tour. So that was the first time I met him, and when we played People Pleaser” while on tour, Maceo soloed, so it was really organic and there’s nobody else that I can think that I would want to play on that song.

L+T: Prince is the executive producer for Superconductor and he co-wrote three songs. How has it been to work with him?
AA: You can tell his influence from the arrangements, the way the instruments are layered and by the funk that’s on there because he knows funk. He lives and breathes funk, so that is really brought out on the record by him being the executive producer. Also, as a songwriter and guitar player, he really pushed me to be better. Like if I thought a song was finished, he’d say, “Well why don’t you write something more, what do you think? Maybe it just needs a little something,” and in my mind I’d be like, “Can I? Can I write another verse to this song that really adds and take this song to the next level?” And I’d do it and say, “Wow, that’s crazy.” So I’m grateful for being pushed because now I don’t see any limits. That was the biggest thing I learned, that there are no limits to what you can do and what you can say.

L+T: This second album sounds different than your first. Is working with Prince – on tour and on the album – the biggest source of that difference?
AA: Definitely. I believe touring with Prince, listening to funk, listening to James Brown and Betty Davis, all of those influenced Superconductor. Having Prince as a mentor and as a coach really made this album what it is.