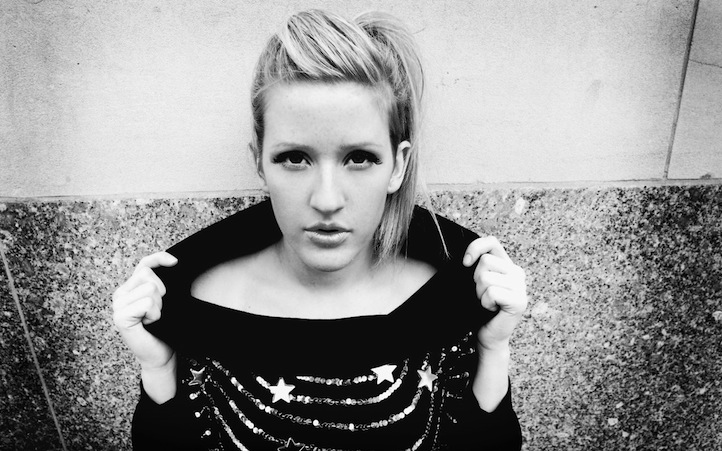 If you haven’t been spooning with your copy of Ellie Goulding’s debut album Lights, then you’ve inadvertently loved her on a mashup. The UK singer/songwriter has spent the greater part of 2011 touring the U.S., selling out shows for adoring (and often crying) fans. She also did this little thing where she was asked to perform at the Royal Wedding. Meanwhile, everyone from Lupe Fiasco to Chiddy Bang has sampled Ellie, whose sound can be accurately referred to as “Folktronica.” A marathon runner, floor-tom percussionist, and steady rising star, Ellie Goulding is what’s happening now. As she brings her Live At Amoeba San Francisco album while penning her follow-up to Lights, Ellie took some time to chat with Life+Times while on tour with Katy Perry.

Life+Times: During your live sets, you do a drum solo to Kanye West’s “Power.” Why did you pick that song?
Ellie Goulding: There’s something about that song that is so, well, powerful. When it comes on onstage, I feel like I have all of the energy in the world all of a sudden. I was just mixing around – because me and my drummer always talk about what we can mash up in my set and make it more interesting and more fun. I heard that and sent it to him and it just seemed to go so perfectly. I want to do more stuff like that, experiment a bit more and see what I can do. There are so many remixes out there of my stuff. I know there’s been a mashup of Kanye with “All Of the Lights.” There’s been loads of those. Also the Lupe thing [sampling Ellie Goulding on “Lightwork”], which came out of nowhere basically.

L+T: In the way you embrace hip-hop in your set, did you realize Hip Hop was going to embrace you back?
EG: No way. Like I love Lupe. His first record [Food & Liquor], I listened to it constantly. It was such a long time ago when it came out. I remember. It’s crazy. I did not expect that at all. I grew up on artists like Lauryn Hill, and I’m really glad to see rappers are fusing my songs, and that I get to incorporate Kanye into my set. I’m really pleased by that.

L+T: You spent a greater part of your early career covering songs. Now people are sampling you.
EG: That’s just mad. Like that Lupe thing came out of nowhere. I just heard it and was blown away. The fact that people just take my stuff and do their own thing to it. It’s the coolest thing ever. I always want to hear a new remix and hear a new mashup. I just find it really interesting the way people interpret my stuff. It’s cool to have that different kind of appreciation from different worlds of music.

L+T: The way the Weeknd remixed Florence and the Machine, he should remix you.
EG: Oh my God. I’d love that.

L+T: You tweeted “High For This” a while back. Are you a Weeknd fan?
EG: Yes! I am! His voice is like a dream. I could just listen to it all night. It’s just one of those things. I remember when I first heard him. It took a few listens and then I was just in love.

L+T: You have some interesting fans. They cry and draw pictures of you and stuff.
EG: I did not know that!

L+T: Well, they’re getting your lyrics tattooed on their bodies.
EG: Okay, yeah, I knew that.

L+T: What are you listening to when you run these days?
EG: I’m listening to Kanye. I also discovered this new person, she’s called iamamiwhoami. She does this live performance art thing, and she’s really cool. Skrillex I’m also pretty into for running.

L+T: Are you tired of being asked about performing at the Royal Wedding?
EG: Someone before asked if I sang “Your Song” at the wedding. I thought that was a thing everyone knew already.

L+T: When you sang “Lights” at the Royal Wedding, how did everyone take to the line “the Queen has been overthrown”?
EG: I really mumbled that line! Like, I really mumbled it. I was like, shit!