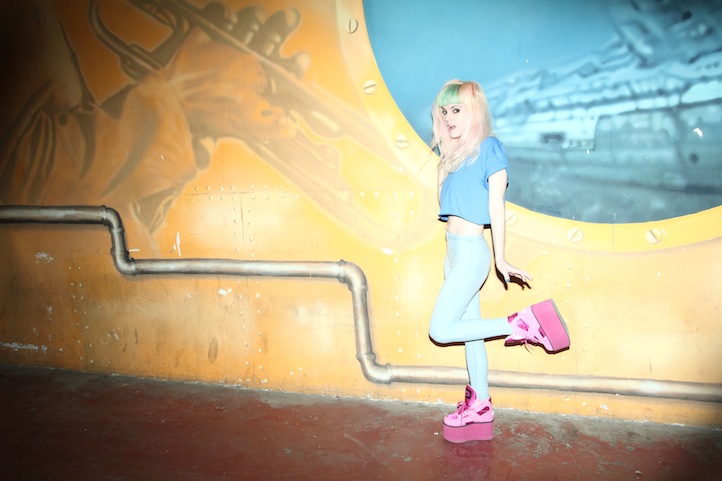 We’re living in an exciting time for EDM. Whether it’s in a band form such as the case with Crystal Castles or presented in a Trap Shit track via ƱZ, one thing remains apparent – EDM will continue to evolve. Reminiscent to no one and matchless to the various talent in the genres in which she plays, Israeli songbird/producer Adi Ulmansky, is the quintessence of this evolution. The mix of moombahton, trap, and pop coupled with her hip hop glazed rhythms, and soft seraphic vocals set a new standard for the electronic music world. Can the rest of us keep up?

Life + Times: What particular hurdles throughout the years serve as the most significant forces behind your current musical style?
Adi Ulmansky: I had a lot of ups and downs in the last two years and I always felt my music is some kind of a sanctuary – like an alternative fantasy world I can shape as I wish. I think my current musical style was more influenced by experiences I had and less by hurdles and hard times.

L+T: Tell me about the electronic music scene in Tel Aviv.
AU: Tel Aviv is really small so there isn’t too much going on, but the things that we do have are really, really good. In the last few years the electronic scene got here – a few very cool DJs and producers like Hudson Mohawke, James Blake, Diplo, Jamie XX. So, we’re trying to keep up even though we’re so far away. I think artists from Tel Aviv and Jerusalem are very unique and different than all the UK and US producers. I think it’s a great advantage. For example, there’s an amazing producer and DJ here called Kalbata who I really like.

L+T: You started off performing with bands, right? What was the catalyst behind your pursuit of becoming a solo artist?
AU: I had a band called Lorena B and I must say we did amazing things that I am really proud of. I always worked on my own stuff in parallel because it’s an amazing feeling to do everything by yourself – from composing to writing, producing, and mixing. Besides that, I combined more rapping and hip hop influences in my own music – which got amazing feedback so it encouraged me to go with what I believe in and relate to the most.

L+T: What enticed you to start dabbling with electronic mixers?
AU: Growing up, I remember my brother listening to a lot of house and techno music and he did a DJ course so it was quite interesting to see all of that; but I didn’t really relate to the music. Only years later when I was exposed to other styles of electronic music [was] I was drawn to that direction. Of course, the fact you can create a world of endless sound all by yourself in your bedroom really appealed to me.

L+T: Shit Just Got Real is like peering into your mind and heart. When did you start working on this mix? Was it difficult producing the mix while you were touring – or do you feel this contributed more emotion to the mix?
AU: I started working on the mixtape half a year before I released it, but there are two tracks on the mixtape that I actually created two years before – and it just felt right to include them. I really enjoy creating while touring because you have a lot of time to think and write while on the road – hours of flights and trains are an amazing opportunity to work on lyrics and even to produce on my laptop. I also think that being on the road is good because I get inspired a lot by the places I’ve been to as well as the culture and people I meet. The song “A.D.I.” for example, was made in London and it was quite weird for me because it felt like, “I’m in London and that’s when I decide to combine Arab drums and ethnic sound in my music?”

L+T: Your latest mix features moombahton, trap, R&B, pop, hip-hop, and samples of traditional Israeli instrumentation. How you are able to puzzle piece such an eclectic mix of sounds together – or is it a secret?
AU: (Laughs) It’s not a secret, but it’s not something I can actually explain. It’s just like a fashion sense – you either have it or you don’t. It’s not something that any sound or production school can teach you. I think I always liked combining all kinds of genres.

L+T: In 2011, you collaborated with Borgore on “Someone Else’s.” How did you two meet? Will he co-produce a track on your debut album?
AU: We met in a funny way. Borgore went to the army with one of my band members. In Israel, we all must go to the army for a few years – girls –  two years and boys, three. There was a tribute concert for Björk and I really wanted to do a unique cover to her song “5 Years.” My band member told me that there’s this guy that he knows from the army that creates this new thing called dubstep. (Laughs) It was so new and different for me at the time and that’s how we met and he just fell in love with my voice. I actually just recorded vocals for his new song so… quite exciting. I don’t really know if he’s going to be on my debut album. I still need to build the whole concept of this album. Meanwhile, I’m working on a new mixtape that will be out in a few months.