Jackie Robinson is a lasting and significant symbol in American history; while what he represents is always clear, who he was as a man too often gets lost in translation. “When we talk about history in America, a lot of times it’s ideas,” says Chadwick Boseman, who stars as Jackie Robinson in 42, the new Warner Bros. film telling the story of Robinson and Brooklyn Dodgers general manager Branch Rickey. Through the film, Boseman, director and writer Brian Helgeland, and producer Thomas Tull all work to give the legend his just due. Showing admirable composure on and off the field in the face of hate and bigotry, Robinson “let his talent on the field do the talking–ultimately winning over fans and his teammates, silencing critics, and paving the way for others to follow.” 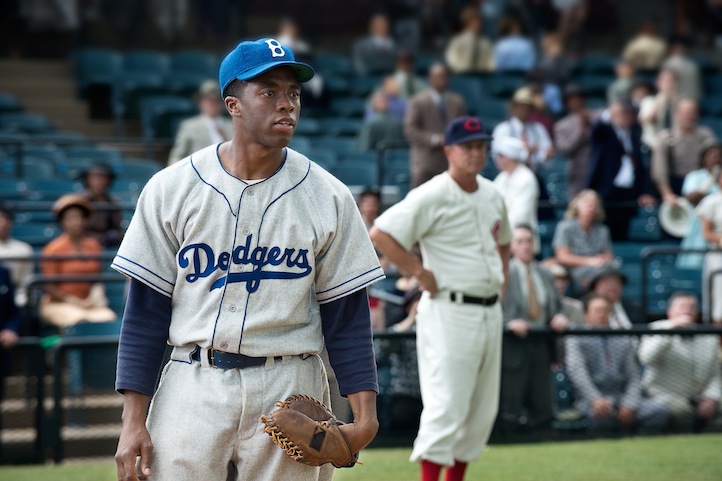 Chadwick Boseman spoke with Life+Times about preparing for the role and learning about Robinson the man, not just the idea.

L+T: How did you come into the role?
CB: I was directing a play in New York in the East Village and I had come to LA on a short trip. I needed to get back to a rehearsal for my acting and my agents told me that they wanted me to come in for a movie, and I was like, “what role?” They said, “well, for Jackie Robinson,” and I was like, “Oh, I guess, I should stay with that rehearsal.” So because I stayed, I ended up meeting [42‘s screenplay writer] Brian Helgeland and I think, to some degree, we hit it off because of our working styles. He told me why he wanted to do the film – we met for like an hour – and I didn’t really think that much of that meeting because I went back to New York. You have auditions all the time where you think you’re going to get it and you don’t, so I just let it go. After we finished the final performance of that play, I went to a restaurant/bar next door and it was the ninth inning of the World Series. The Cardinals were playing the Texas Rangers. I was watching the Cardinals celebrate and I had this feeling that I was gonna get the role. I nudged a friend of mine and said, “Hey, I think I’m gonna get this role playing Jackie Robinson.” He said, “What, are you serious?” I said, “Yeah, I just auditioned for it when I was in LA.” He nudged my other friend and said, “Let’s toast [to] this.” So, we toasted to me getting the role before I actually got it and sure enough the next week I went back to LA and Brian Helgeland called me in to read again. I could sort of tell during that meeting that again, our working styles were vibing together. He was trying to prove it to someone else to confirm it; I did the baseball tryout and the rest is history. 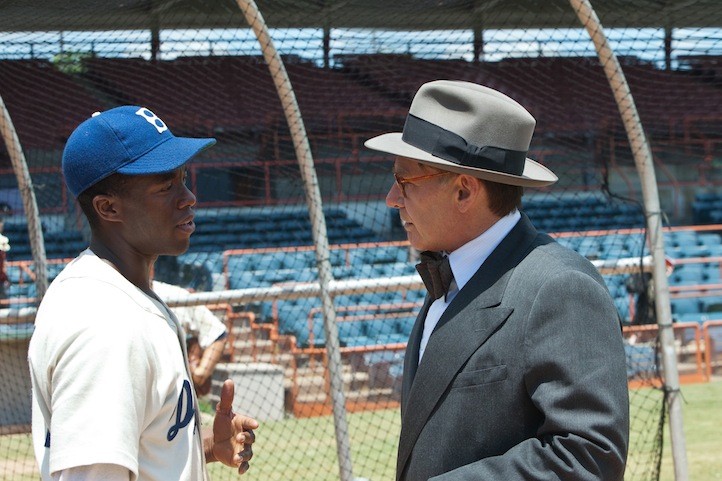 L+T: Why was now the time to make the Jackie Robinson film?
CB: I think all of the elements just came together at the right time. I know [for producer] Thomas Tull from [Legendary Pictures], his passion for this movie became urgent. He already had a passion for Jackie Robinson; if you go into his office, you see a huge, beautiful photo of Jackie Robinson on his wall. He was doing an event with kids with Ken Griffey, Jr., and he [Griffey] was talking about Jackie Robinson and they didn’t know who he was. They didn’t know who Jackie Robinson was and Ken Griffey, Jr. turned to Thomas Tull and said, “We have to do something about this.” For years, Rachel Robinson [Jackie’s wife] has been trying to get this movie done. Tull went to her and said, “I’m gonna do this, I promise you that I will make it a focus.” She was 89 at the time and said, “Can you get it done before my 90th birthday?” So, we actually wrapped the movie – the last day of principal photography – was the day before her 90th birthday. We went to her birthday party, brought flowers, some pictures and memorabilia from the set and said the film was in the can. So it was just the right time. Brian Helgeland was passionate about it, he has his own stories about what was serendipitous about the moment for him. To me, it was magical, things just happened at the right time.

L+T: How did you go about preparing for the role? Who did you talk to, what did you watch, etc.?
CB: The first thing I did when I was leaving New York before we did our spring training, I went to go meet Rachel Robinson. I knew I had to talk to her before I did this. In some ways, [Jackie and Rachel] and are a unit, they’re a puzzle. He’s the missing piece or the mystery, so I could see the edges of who he was from who she is. I could see what type of man he was from how great she is. She talked about their relationship, physical things that he would do, his personality. I was pointed toward and given some books to read on that day, so I read Arnold Rampersad‘s Jackie Robinson biography, I read Jackie’s own [auto]biography, Wendell Smith – who’s actually in the movie – I read his biography about it. I was given documentaries to watch, the Hall of Fame footage to watch, all of that was part of the research. And then I played baseball, that’s what we did. Five days a week, we had baseball practice in the morning, conditioning sessions in the afternoon and every three weeks, we would take practice and take the Hall of Fame footage and split-screen it, so that I could see what was different about his batting style and my batting style, what was different about his base-running and my base-running, what was different about his fielding, all that stuff was done in preparation. 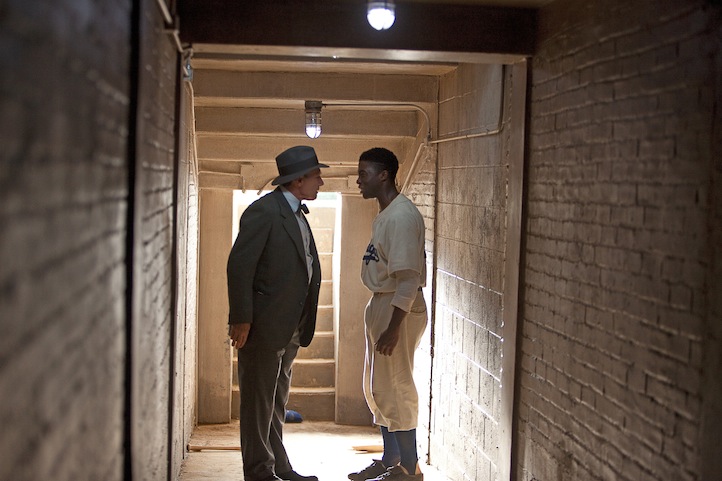 L+T: What were your thoughts about Jackie Robinson coming into the film? Was it a pretty natural thing for you to be able to play him?
CB: I played little league baseball. I didn’t play baseball on a level where I could play a hall-of-famer, so all that work was necessary in order to feel comfortable doing it. The coaches that I had wanted baseball to be represented properly, so I felt that it was an intimidating endeavor. I knew about him because my parents made sure that we studied certain things, that we were hip to African-American history. So, he was somebody that came up when we learned about Malcolm X, Martin Luther King, Stokely Carmichel, H. Rap Brown, and Muhammad Ali. Jackie Robinson is one of those figures, but he’s an idea when you learn about him. When we talk about history in America, a lot of times it’s ideas, it’s hero-worship as opposed to really examining people as human beings. So what I learned about him by studying him as a man, acting, doing the primary research talking to his family, doing the secondary research reading the books, was that I needed to study breath-of-breath and find out what type of person he was. He was an opinionated person, he was a religious man, he was a warrior. You talk to any of the Negro League players, they say that he was not to be messed with. He was the guy that would fight. What people sometimes think about him is that he’s passive or that he’s a victim, but in reality, he found a different way to transfer those emotions. You see it in his base-running. You see it in the strategy he used of non-violently approaching the struggle, but it’s warrior-like, and that’s what I felt was important to show. Lastly, he had greatness within him. He was a better football player than he was a baseball player. Better at basketball, better at track and field, he was an Army officer in a time when there were few officers, but there was not a place in America for him to completely actualize his greatness. Because he had this opportunity [in the MLB], he could finally be the full-blown man that he felt within himself.