One of the most highly anticipated films of the holiday season is certainly Annie, a 2014 adaptation of the 90-year-old American classic that has seen renditions as a musical, comic strip and film (this is the fourth film adaptation). The film stars Jamie Foxx, Quvenzhané Wallis and Cameron Diaz. While some of the names are different – Foxx’s character “Will Stacks” is an update to “Daddy Warbucks,” for instance – and the references updated, the themes remain the same.

Foxx’s righthand man in the film is played by Adewale Akinnuoye-Agbaje, who takes on the role of “Nash” (an update to “Punjab”). It’s a stark contrast to previous roles we’ve seen Akinnuoye-Agbaje, but one he relishes. Life+Times caught up with him to talk Annie and his role as Nash. 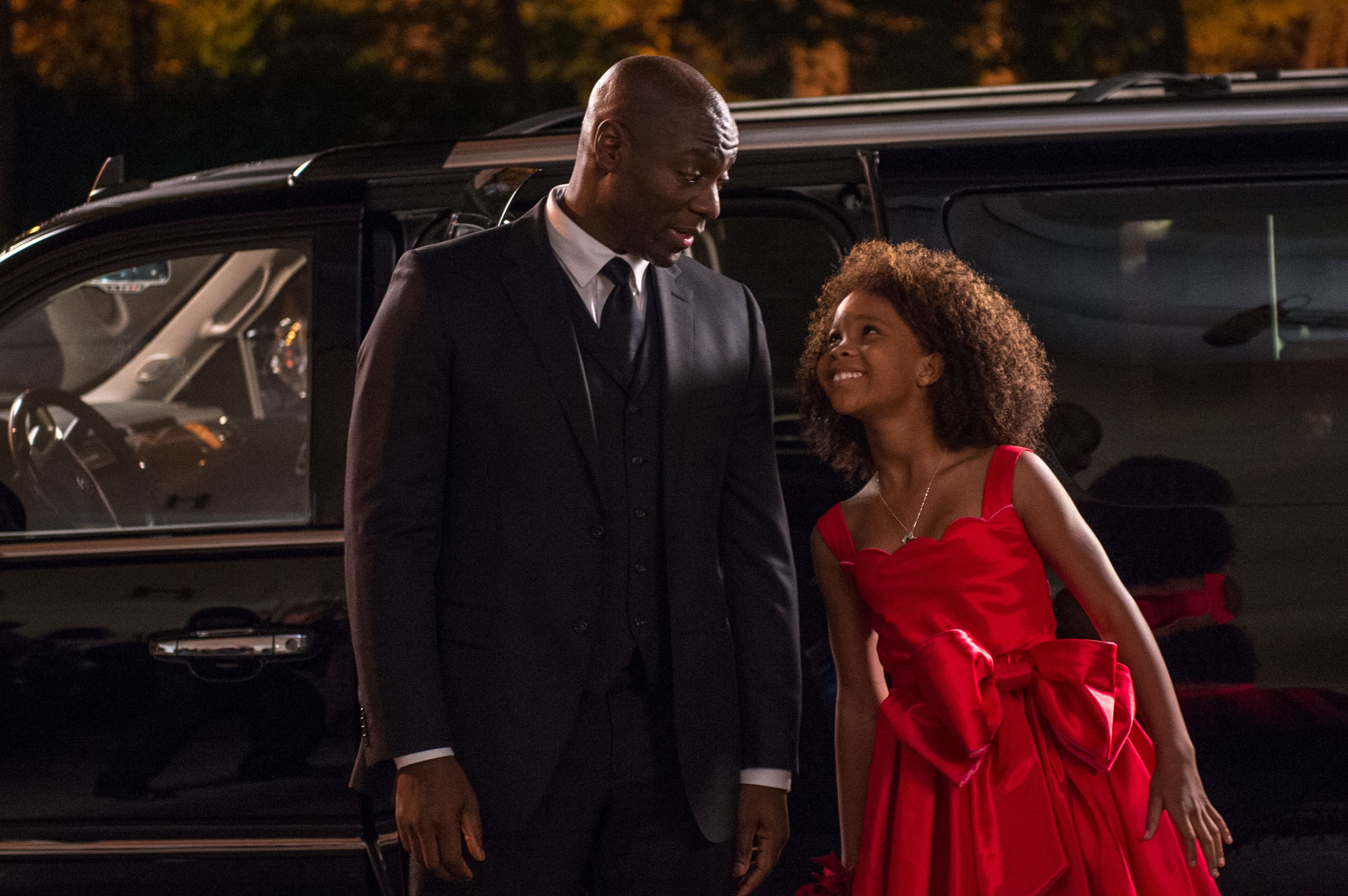 Life+Times: Talk about your role in Annie and the process of you landing this part.
Adewale Akinnuoye-Agbaje: The process was pretty simple. I had met with [director] Will [Gluck] on another project he was doing – we’re both fans of each other’s work and were trying to figure out a way we could work together. This project came up, I met with DeVon Franklin and Will’s people, and it just worked out that this was a good one to kick off a working relationship with. So, the process was fairly straightforward. If you know the original Annie, there’s a character by the name of Punjab – this is kind of like a modern adaptation. The character I play is similar to him, but by the name of Nash. He is the righthand man, driver and security personnel to Will Stacks – “Daddy” Warbucks in the original – who’s played by Jamie Foxx. He also befriends Annie and helps her try to find her family. Daddy Warbucks is the father figure to Annie and Nash would be the uncle, so to speak. It’s a different type of role from what people normally see me people in in that my roles have tended to be more intense and tough guys; this guy is more lighthearted and humorous but he’s still that guy that’s got your back.

L+T: Why did you want to take on the role? Was it different to prepare for since it’s different from other things you’ve done?
AAA: There were a few reasons why I wanted to take it. One, that kind of personality is closer to mine, humorous and lighthearted, that’s more of me than some of the other characters you may have seen. The other reason is I grew up watching these classics. I grew up watching Wizard Of Oz, Oliver Twist and Annie, and those are some of the reasons I wanted to get into movies. So, to be a part of a classic and have my future children be able to watch their daddy on TV was kind of endearing to me. Ultimately, the spirit of the movie is about family and [being able] to sit back and watch a movie like this with family and friends and have a good laugh. It’s a chance to be a part of a classic, work with the Black elite of Hollywood and to show a different side of my personality that people haven’t regularly seen.

L+T: You mentioned that this is a modern adaptation. There’s clearly some updated references. How does this compare to the previous versions?
AAA: Obviously, you can see how it’s different in the sense of the cast. When we say a modern adaption, we don’t live in all white, Black or Asian society, we live in a multicultural melting pot and the film really reflects that. The fact that it was shot in New York is a very real texture, so it’s not fantastical, but it still keeps the spirit of Annie. That’s something that’s unique to New York, that when the chips are down, the people really come together. You see that in Annie with her hodgepodge foster family and extended friends. There’s nothing greater about the New York spirit and Annie spirit where people really come together and help each other. It’s a great message to put out around Christmas and also at a time like this.

L+T: How was your experience working with Jamie Foxx as his righthand man?
AAA: It was the first time we crossed paths and the first time I’ve worked with him and it was a great experience. Jamie is a great guy and phenomenal actor. He makes comedy look very easy. We just had a great time and that energy comes across on the screen. We were just laughing for most of his takes because he’s a hilarious. It was a joy. We’re both fans of each other’s work and when we did scenes together, however small, it was a delight.

L+T: Obviously, Annie is best known as a musical. Are you doing any singing or dancing? How was that element something that was different for you?
AAA: Well, this is my first musical, hopefully not the last. It’s a nice segue into that world. The character I play – albeit a lighthearted and humorous film – is still a guy that oversees things and makes sure everything is in place. So, he doesn’t totally drop his guard like some of the other characters. He does sing a few words at the end in the finale and will do a nice little two-step or shuffle, but ultimately, he’s an overseer and watcher and safeguard, so he’s always going to be in his character. There was an opportunity to break a small move and drop a little note [laughs]. I think that’s a nice way to put it.

L+T: Many are most familiar with you from your role in OZ as Simon Adebisi and you’re also set to appear on Game Of Thrones. How was developing your character on those shows a different process from doing so in a movie?
AAA: Well, they’re very different simply because, certainly in OZ, it’s an intense character. The mindset of somebody who is a murderer and is never getting out of prison is a totally different mindset. You really have to go there. I can’t say it [enough], it is extremely intense if you’re going to do it right and make people believe that’s your reality. For me as a person, it’s very demanding and taxing because you have to stay in that pocket. It’s ultimately rewarding because with those types of characters, there’s a freedom because there are no limits or boundaries. He’ll do whatever he needs to do, so there’s a freedom in that. At the same time, the darkness you have to embody. The mindset of man who is never getting out of prison, is constantly on guard watching for who is going to stab him in the back, and he’s also killing people in every way he can. That’s a very different mindset than playing Nash in Annie [laughs], a friendly uncle and bodyguard. It’s what I would call a vacation of a job.