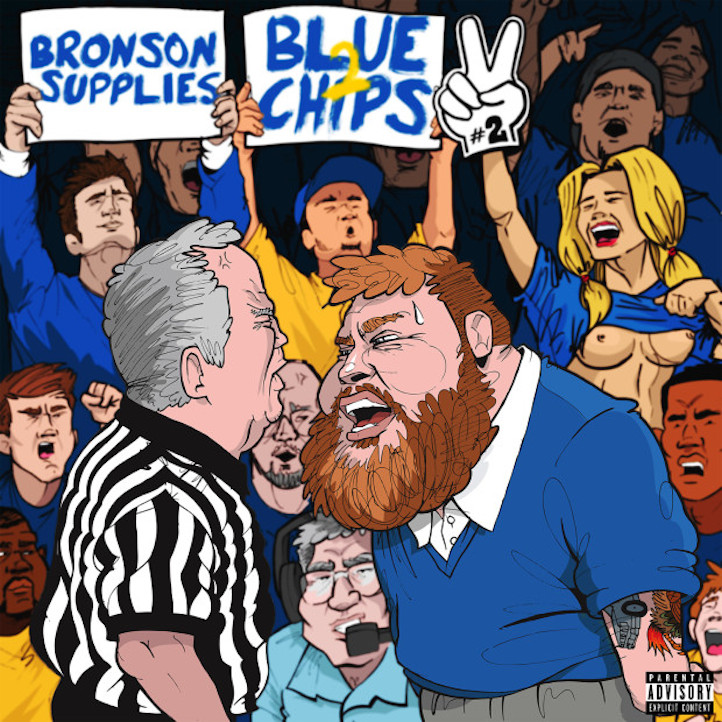 Action Bronson might be one of the hottest rappers currently rocking in the proverbial game, but he’s not tainted by it. The Queens native found his way to the upper echelon of rap via mixtapes and a handful of street EPs and albums. However 2012’s Blue Chips with Brooklyn producer Party Supplies was the catalyst that really sparked the movement for Bronsolino. It solidified his place as the rapper with expensive foodie name drops and shit-talky punchlines that haven’t been present in Hip-Hop for quite some time. He dropped Blue Chips 2 earlier this month, and the response has been equally positive. Action Bronson has the spirit of an underground upstart with a major label budget. That’s a deadly combination for competition when the passion is still present, but there’s no ceiling. Perhaps that’s why Bam Bam stays winning. Life+Times checked in with Bronson to discuss his culinary past and the soundtrack that fueled it, along with his semi-budding acting career and the case of the copycats infiltrating rap as of late.

L+T: I read on your Twitter that you wrote most of it at Mama Shelter in Paris…
Action Bronson: Ehhh, you know I’m bullshittin’ [laughs]. Tryin’ to get more Parisian love. I actually wrote “Midgets Cough” there and I wrote my verse for the song with Mac [Miller] “Twin Peugeots,” so I definitely did write a couple there. That’s a good place to be creative. It’s a very creative hotel.

L+T: There was a lot of pizza on the menu. As an Italian, I didn’t know Paris was known for all that.
Action Bronson: Whoa whoa whoa hold up, Miss Italian [laughs]. Let me tell you something right now. That fucking pizza is so next level that you wouldn’t even know what to do with yourself.

L+T: Are you serious?
Action Bronson: I am so serious. The fucking guy is Italian! Next level, but the guy is Italian and he knows French! He’s a huge fan of mine, and they make the four cheese with the truffle, oh my God.

L+T: That makes me feel better that he’s Italian. I have this theory. I believe certain types of restaurants require the cultural cosign. Is that weird?
Action Bronson: Sometimes you gotta venture off…you never know what you’ll stumble upon. But honestly? You’re usually right. If there’s cab drivers in front of the Halal truck, you go there.

L+T: Right? See. Exactly. So how is major label life treating you?
Action Bronson: [laughs] Um, yeah. It feels great. Yeah. [laughs] Nah honestly, it’s cool. You gotta answer to certain people – not answer, but there’s a certain process that happens now. It’s a large process. Sometimes it can be frustrating, but you know. That’s the name of the game. You gotta get your shot to be as big as possible, and if they can help, fuck it.

L+T: Is that weird for a guy like you though? You built your buzz from the ground up and now you have people telling you what time to do things?
Action Bronson: Even before though I had to follow a schedule. If you want to get paid a certain way, you’re gonna definitely have to fuckin’ modify the way you do things. Growing up business-wise and everything like that, as underground rappers, it’s not terrible…but you can’t live like that. I can’t live like that. At the end of the day, I have a family to take care of, and I’m trying to make myself as big of a star as possible so their families and their families don’t ever have to worry. I’m sacrificing myself; I know what’s up. I know what I need to do for my lineage and my legacy as an artist as well.

L+T: It’s gotta feel good though to know you’re making it in an environment where everyone’s a rapper and everyone’s dropping songs…
Action Bronson: Yeah. I was at that point too. I don’t even know how I got to this point. It’s crazy to me. I didn’t know that you could drop songs on the internet – add music and shit. Until someone put me onto YouTube in like 2009. That’s kind of how it steam-rolled. You just gotta be recognized, you’ve gotta stand out. Everyone’s a copycat these days. It’s all the same shit. Everyone is just…it’s all about money to them. They see everyone ballin’, this and that, in the videos. It’s just because those drums are hitting and there’s a lot of fuckin’ rolling cymbals and hi-hats and shit like that. They’re not making music that they feel. They don’t feel music like I do. I feel music in my bones. I live it every single day of my life. There’s not a day that goes by that I don’t listen to music in some form.

L+T: What are you currently playing?
Action Bronson: I jump around on YouTube all the time. I was just playing “40oz. To Freedom” by Sublime. I’ve got a Salsa mix up – I usually listen to that in the morning. It gets me going.

L+T: Do you play music while you’re cooking?
Action Bronson: Oh man, always. In every single kitchen I’ve worked in, the radio’s been on. It would always be on La Mega or the Mexican channel, which has all of the Ranchero songs. That’s how it usually goes in kitchens.

L+T: So do you play the music that applies to what you’re cooking? Do you play Salsa when you’re making salsa?
Action Bronson: God, that was corny.

L+T: You know what? I was joking.
Action Bronson: [laughs] I know. It was fine [laughs]. Spanish music to me – those types of rhythms – I don’t know, it just for me makes me cook the best.

L+T: You reference a lot of expensive food in your music. If people aren’t up on their foodie-isms, they don’t realize you’re dropping the Bugatti of food in your songs.
Action Bronson: Yeah, I mean listen. It’s for the people that know. It’s like a certain type of club, you know? If you know, you know. You’re in the cult.

L+T: What’s the most expensive food you’ve ever encountered.
Action Bronson: Hmmm. Fuck. Wow, you know what? I don’t know. I can tell you the most money I’ve paid on a bill for food?

L+T: Okay, yeah…
Action Bronson: Joe Beef in Montreal. The bill was like $2,500 bucks. There was only like four of us. It was crazy. Where else, where else. [Pauses] I can’t even think. I don’t even look at the price anymore…

L+T: So I saw that Blue Chips 2 trailer before it dropped. You’re a really good actor.
Action Bronson: Shut up!

L+T: Seriously. You ever see some of the shitty acting in music videos? I could see you playing in a mafia film or something.
Action Bronson: I have so many different angles, I could do more than a Mafioso. That was more of my bookie [Pauses]. Yeah I guess you could say that was Mafioso [laughs].

L+T: Total Mafioso. Felt like I was watching my uncle on the screen.
Action Bronson: I remind you of your uncle? He must be a fucking gorgeous man.

L+T: Total stud, but yeah you did your thing.
Action Bronson: [laughs] I feel like I could’ve done better than that, but I couldn’t stop laughing. There were definitely some more takes in me that could’ve been better.

L+T: Do you think you’d pursue acting at some point?
Action Bronson: Yeah, definitely. We’re in the process right now of getting this movie, The Symbol. Remember that video I did for “The Symbol”? I was like the ‘70s vigilante. We’re gonna get that done into a whole short and like fuckin’ present it places and shit like that.

L+T: So when are you going to have time to work on your album? Or as you like to say, your “album” album?
Action Bronson: [laughs] I’m working on it all the time. I work on it constantly. I have a lot done already. I don’t even have a fuckin’ date to turn it in, so I don’t even know if it’ll be what I have now or if it’ll be something else. I don’t even know at this point. I’m just focused on Blue Chips 2 at this point because Blue Chips is the reason why a lot of things are the way they are right now for me in my life, and I’m gonna ride this until the wheels fuckin’ fall off this bitch.