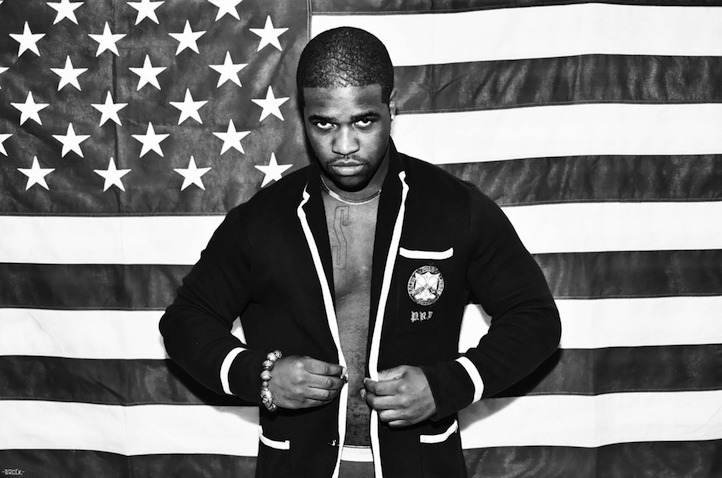 Although A$AP Ferg is synonymous with the turn up – due in part to the success of singles like “Work” and “Shabba” – he feels his responsibility as an artist is bigger than just getting parties popping and as he gets older he wants his music to reflect that. “I’ve gotten a little wiser. I’ve grown. I kind of know what I want out of life,” says A$AP Ferg. “So what I’m putting out there is a little different from when I first started making music.” That growth and maturity is exhibited here and there throughout Ferg Forever, his latest mixtape. There are, of course, still joints to turn up to on the project, but there are also a set of more reflective, honest, revealing, emotionally-fueled and politically charged records like “Uncle”, “Bonnoroo”, “Commitment Issues”, “Thug Cry” and “Talk It.” “I now understand the power of words, so I now try to use them carefully,” he admits.

He was especially careful in choosing a title for the mixtape. He decided on Ferg Forever as a way of paying homage to his father, his father’s legacy and his family’s name, which is Ferguson. “Now that I’m on I feel like I can take that name to the next level,” says the rapper born Darold Ferguson, Jr. His father, who was a well-known graphic designer in Harlem, designed the Bad Boy Records logo for Diddy and the Uptown Records logo for Andre Harrell, and as Ferg puts it, “did a bunch of shit for people in the industry.” Life + Times recently met with A$AP Ferg at the Polo Grounds’ offices and we discussed his latest mixtape, his walk-off with Cara Delevingne and his upcoming tour with YG.

Life + Times: On the song, “Bonnoroo”, you describe a moment you had with Lauryn Hill. For you, was that one of those “I’ve made it” moments?
A$AP Ferg: Just meeting her and being in the same rehearsal room with her and Bob Marley‘s son and Skrillex and Janelle Monae was crazy. That whole experience was just cool, man. I was in awe. Skrillex had a couple of the band members from Grateful Dead on stage. Just to know that he could pull all of those people is just crazy. That Lauryn Hill moment was just a piece of the joy that I was in when I was performing that day. By the way, I just performed at her daughter’s sweet sixteen. That goes to show that she was fucking with me if she invited me out to hang with the family and shit.

L+T: One of my favorites from Ferg Forever is “Ja Rule.” How did you and Big Sean come up with the concept for that particular record?
Ferg: I don’t even know how that whole concept of me rapping about Ja Rule came about. It was just one of them random things. Sean was fucking with it, so he jumped on that shit. I guess it was because he could relate to the era of the whole Ja Rule and Murder Inc reign. We were just on some living it up like how Ja Rule was living up, because that’s what we grew up seeing.

L+T: On the song “Dope Walk”, you declare that your walk is meaner than Cara Delevingne, which led to an epic “walk-off” between you two. After that “walk-off”, do you still think you’re walk is meaner than hers?
Ferg: Nah, she actually has a mean walk. I mean she’s getting far with that walk, but my walk is actually a dance. I thought it was cool that Cara actually heard the record and was just like, “You must be out of your mind, because my walk crazy.”

L+T: She responded fast too.
Ferg: Exactly. I didn’t even know her before than and now we’re cool. We talk to each other like every other day.

L+T: “Uncle” is reminiscent to the JAY Z and Beanie Sigel classic, “Where Have You Been?” Was it difficult recording such a revealing record?
Ferg: I wasn’t going to release that song. There are a lot of songs that I wasn’t going to release just for personal reasons. I also didn’t want to excite people the wrong way. There were a couple of turned up songs that I didn’t want to release, because I didn’t want to excite people the wrong way. I don’t need my career going in certain directions [laughs]. But I just felt like everybody has a fucked up uncle or somebody in their family that is fucked up, so I felt like a lot of people could relate to that. And it’s not so much that he’s fucked up, but we all just have problems and family issues. I was just displaying mines and letting people know that I’m human and I go through the same shit y’all go through.

L+T: For your sophomore album, will there be more of an unveiling of who A$AP Ferg is as a person?
Ferg: Yeah, I will continue to grow in that way, because my whole goal is to just help people. If I can display my issues or my problems to help somebody get through whatever they are going through then that’s what I’ll do. I’ll just continue to give off elements of my life and just let people know what fame is like, because you know everybody wants to know what fame is like. I’ll let them know what life was like before fame or how I’m dealing with fame. I’ll just give them all sides of me. That’s what I feel like I owe my fans.

L+T: Have you started recording for your sophomore album?
Ferg: Yeah, I’m actually almost done with the album. We’re just mixing, re-recording and making sure ideas are complete on certain songs.

L+T: A$AP Mob album, L.O.R.D. was originally set to drop sometime this year. What prevented it from coming out?
Ferg: It wasn’t right. We are advocates and strong believers of art. Art is meant to be appreciated, cherished and loved by the people, but you can’t put something out that you don’t love yourself. We weren’t to the point where we loved what we were doing yet. That album is definitely going to come though.

L+T: When collaborating with Pop and R&B artists like Ariana Grande, Elle Varner, Liam Bailey and Haim, do you approach the songs differently from when you’re collaborating with hip hop artists?
Ferg: It’s always me bringing Ferg to the party, because I’m Ferg on everything. I just be tearing shit up. Whether it’s a pop song or hip hop song I just turn it up. You’re always going to hear a crazy fire verse from me.

L+T: Speaking of collaborations, what should fans expect from your upcoming BestCoast Connection Tour with YG?
Ferg: Expect a real turned up show. YG is a brother of mine for real. That’s really my dude. Us having a tour together is just so monumental because we’re really friends. You know how some people be doing tours, but they’re not really friends and you can feel it? That won’t be us, so you’re bound to see some magical moments on stage, because we’re cool like that.

L+T: Where did the idea for the tour come from?
Ferg: Basically, our peoples said since we’re always bumping into each other and always bringing each other out on each other’s set, why not do a tour together? It made perfect sense. We were like, “Why didn’t we think of the shit?”

L+T: That is a dope idea, especially since there haven’t really been many hip hop tours headlined by two rappers representing two different coasts.
Ferg: It really hasn’t and that’s what I was thinking about. We both came up with the concepts for everything for the tour. He was like, “I’m going to wear the Pac shirt and you’re going to wear the Biggie shirt.” I was like we should call it the BestCoast Connection Tour. At first, I was looking at it as an East coast and West coast thing, but if the South or whoever wanted to get involved now it really becomes the BestCoast Connection. It would be us all coming together, rocking out and going crazy.

L+T: You’re big on creativity. You make music, paint and design clothing. So what’s your favorite way to express yourself creatively?
Ferg: I just enjoy working in different mediums. I really just work with different people who I fuck with and who fuck with me, like Syracuse University. They hollered at me to do a collab with them through Virgin Mega USA. If you want to work and it’s a dope idea then I’m with it. I just want to continue to keep working and putting dope ideas out. I get so many ideas and I don’t like sitting on any of them. I’d rather just put them out and let them do what they do.

L+T: How did you link up with Syracuse University for that collaboration?
Ferg: I had a show there and it was one of the best shows that I’ve ever had. Syracuse just wanted to continue that marriage and see if we could do something else together. We happened to come up with this collaboration and it did really well.

L+T: What artists have had the biggest impact on your musical style?
Ferg: I’ve taken different elements from different artists. I feel like Pharrell let it be known for Black kids that they could be different. It was cool to be different after I saw him do it. I was doing it before, but I was getting ate up for the tight jeans, polos and stuff like that. Then I saw Pharrell doing it and he had the bitches. I was like, “This is just how I am.” That’s when I realized it wasn’t anything wrong with how I dressed. I said to myself that I was going to be one of the trailblazers of that shit in Harlem. I was one of the kids stamping that different shit in Harlem. Then we formed A$AP, which was a bunch of hood ass kids who liked to just get fly. We were just kids of that shit, so Pharrell was a big influence. Busta Rhymes and how his style was wild and real visual was an influence. Puff – which circles back to Harlem and him hanging with my pops – was an influence. They had a crew named Same Gang and they were just like A$AP. They ran through Harlem and threw cookouts and stuff like that. I grew up around all of that shit, so it’s just a melting pot of a bunch of things.

L+T: In your opinion, how have you changed over the course of your career?
Ferg: When I first started making music I was just doing it because my friends were doing it, but now I’m making music because I know that I can heal people. Rocky and I had dinner with a cancer patient who said our music helped him beat cancer. Once I heard that I was in awe and shocked. From that point on, I just wanted to continue to heal people through words. Now I just want to make innovative shit and push our culture to bigger and better things.