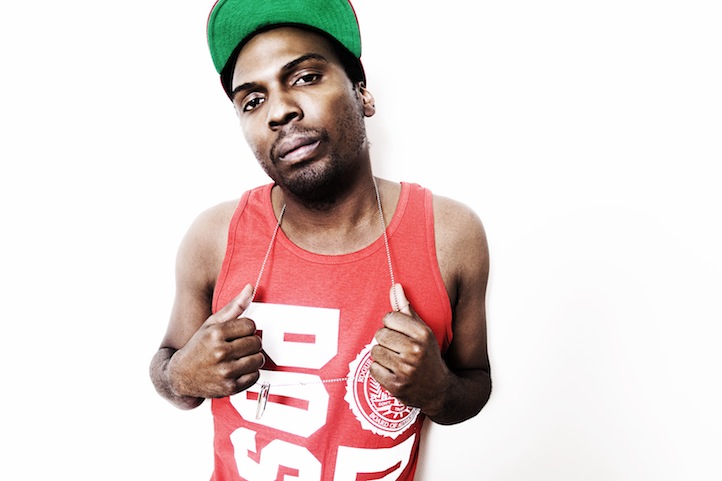 The ability to present music with keen versatility in bass thumping tempos and unpredictable variations of sounds is fitting for the genre that is recognized by most as the “American Dubstep King.” The Los Angeles based DJ, producer and crowd surfing crusader, John Dadzie, better known as 12th Planet, consistently approaches his sets with larger-than-life stage presence, winsome words to the crowd and an ardent passion for the music. Dadzie has partnered with fellow dubstep giant and friend, Skrillex, on tracks featured on both their latest albums. He even has an impending track with Dizzee Rascal, Machine Gun Kelly and the Madden brothers of Good Charlotte. With such a deeply entrenched involvement in dubstep, why would 12th Planet tell Life + Times that dubstep isn’t music and it’s here to stay?

Life + Times: What was the gig that you think really set you up to the scene as a dubstep DJ?
12th Plane
t: Before I started producing dubstep, I was touring as a drum and bass DJ and a drum and bass producer. So, I was always in England; in London, like, right when dubstep, well, before dubstep was even called dubstep. I think it wasn’t until this party; it was called Digital Mystikz or DMZ. I went to the two year anniversary about four or five years ago and it was the first time I saw how hot dubstep was –  not in America – but all over the world. It was the first time I saw people from Norway, Sweden, South Africa and New Zealand, Canada, America, Mexico, South America. Everyone flew in and that was what really, really inspired me to keep going with it.

L+T: Your initial name was Infiltrata, then you ended up switching to 12th Planet and that’s when you began doing dubstep. What made you switch your name?
12th Planet: I kind of wanted to keep the genres separated. At that time, people that made dubstep or listened to dubstep were kinda looked down upon by the drum and bass community. A lot of people in the drum and bass community thought [dubstep] was just really slow drum and bass. So, everyone would make fun of you and call you a traitor and all this stuff. So, I was just like “Fuck that, I’m just gonna switch my name and no one will even know that it was me.” But then, a couple of years later, people just started jumping on the train. It didn’t make a difference after that. I should have just kept the name, but I really just didn’t want to get hated-on on the message boards. That’s why I switched the name to have a bit of anonymity.

L+T: Going into BPM and DJs, I know that songwriters write their lyrics inspired off of life experiences. As a DJ, your music is comprised of BPM, bass and overall sound. What are some of the muses for the music that you create?
12th Planet: I like TV and l like bacon a lot. That’s pretty much what inspires me the most. And my friends that also produce. Yeah, that’s my main inspiration. My friends will make a song and that’ll make me think like, “Damn, how did they make that sound?” So, I’m gonna go to the studio and I’m gonna try and make that sound, but I’m gonna make it better and that’s how the cycle keeps going. Then you make a song and your friends are like, “Damn, how did you do that?” That’s pretty much how it goes. That’s my main muse, I guess.

L+T: For some of the critics that claim that dubstep isn’t music. What would you say in response to them?
12th Planet: I’d say they’re right. Dubstep is not music. Dubstep is like fun, in an audio form. It embodies everything about having fun and just being young and gettin’ heady. Yes, I guess it’s not really music. It’s kinda just a fun time.

L+T: I hear that you’re doing a remix with Dizzee Rascal? Is that true?
12th Planet: No, I’m not doing a remix. I’m doing an original track with him and the Madden brothers who are in this band, Good Charlotte, and also Machine Gun Kelly.

L+T: Is it a track altogether or are those separate projects?
12th Planet: No, the track is altogether. I’m just trying to finish it right now, but I’m not sure if it’s gonna be on my project or on the Maddens’ project. I just gotta finish it.

L+T: So, who else are you working with? Can you shed some light on 2012 projects?
12th Planet: My next EP that I’m working on will have some collaboration with the usual suspects. Hopefully, that drops before summer. That’s pretty much all I’m working on. I’m not really writing for anyone right now other than myself.

L+T: You and Skrillex have some sick tracks together, like on your album, The End Is Near, you have “Burst.” Then, on his album, it’s “Right on Time”. Is there any chance you guys will actually do an entire collaboration album together?
12th Planet: With our opposing work schedules, I think it seems impossible. Every time we get the chance to work on songs, we work on it. We’re not gonna stop writing music together or when the time arises it’s not like we won’t collaborate. I just don’t really foresee an album coming from both of us or a co-project. Although, that would be awesome! I’d be totally down to do it. I’m gone like 275 days a year and he’s gone 345 days a year. Of those twenty days off, it’s hard to get in the studio together.

L+T: Do you think dubstep is a trend that will just fade out within the next five years or so?
12th Planet: No. With the way the roots of dubstep are, especially in America, its origins come from drum and bass. So, that mentality is kind of like this “fuck you” mentality, it’s like “us against the world” really. I think that’s also the appeal of dubstep in America. It’s not like this pretentious genre where you have to dress a certain way or look a certain way and act a certain way. You can be rich, you can be poor, black, white, whatever; it’s just all about having a good time. For that party, everybody is just one and that’s why there’s really not that many fights at dubstep shows. It’s getting a bad flack at some shows, because there’s a lot of dude-bros that go to the shows, like a lot of frat boys that take their shirts off. They’re having fun and that’s what it’s all about. If that’s the way they act to have fun, then so be it. You don’t really have to partake of it. It’s welcome to everyone and that’s what’s gonna keep it around for a long time. Even with drum and bass, drum and bass has been around since ’94, ’93. It was really strong like ’98 to about 2002 and then it fell off, then it came back around 2005-07. Then it fell off and it came back and resurfaced. I think that’s what’s gonna happen to dubstep. It’s just always gonna be around, it will always be an alternative option to house music. That’s just the way it is.

L+T: It just keeps evolving.
12th Planet: It’s like if house music is rock n’ roll, then dubstep is like hip hop, it will always be here.