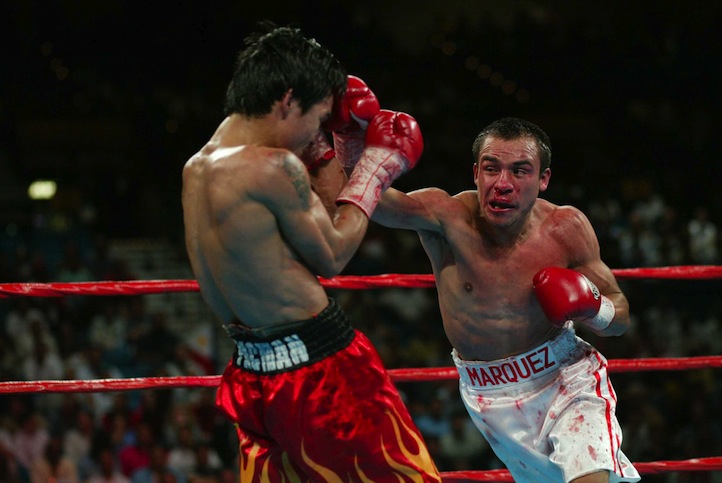 For the past four years, Marquez has been campaigning for a third fight with Pacquiao. It appeared that the third fight would never materialize after Pacquiao squeaked by and said “This business is over” after their second fight. Pacquiao would go on to win world titles at lightweight, light welterweight, welterweight and super welterweight by smashing opponents in startling fashion. Meanwhile, Marquez chugged along and earned several championships at lightweight. He tried his hand at welterweight, but was soundly defeated by Floyd Mayweather. Nevertheless, after upending Michael Katsidis last November, Marquez wore a t-shirt that said “Marquez beat Pacquiao twice.” With Pacquiao obliterating the competition and a megafight with Floyd Mayweather continuously falling through, Pacquiao turned to the one opponent that has haunted him. An annoyed Pacquiao wants to shut Marquez up, and Marquez is perfectly fine with letting the Pac Man try.

“If he is upset about what I said about winning the first two fights – I am upset that I didn’t get the decision. I am motivated just as much as he is. We all have opinions and my opinion is that I didn’t get the decisions I deserved,” Marquez said. “We were able to win some fights and get back to the one we always wanted to do. The fans wanted to see and it and the press wanted to see this third fight.” Obviously, things have changed since their last meeting. Pacquiao has become a complete fighter who shreds his opponents with both hands and has made mincemeat out of foes much bigger than him. His speed and power have put fear into the hearts of men who face him and the 33-year-old sits pretty on top of the fictional pound for pound list.

Some wrote off Marquez after his lopsided loss to Floyd “Money” Mayweather. But Marquez was much smaller and struggled with the defensive minded Mayweather. Styles make fights though, and Marquez feels that he is certainly the kryptonite to the Filipino Superman. “I had problems moving up in weight, but I would rather fight Pacquiao three or four more times than fight Mayweather once,” Marquez stated. “Mayweather is a defensive fighter – he doesn’t let you fight, but we know Pacquiao comes to fight and he is a spectacular fighter, he is always going to give you a fight and that’s why I know it will be a war between us.”

But because of Pacquiao’s devastation through the weight classes that has claimed the boxing careers of Oscar De La Hoya, Ricky Hatton and Shane Mosley, Marquez finds himself as much as a 9-1 underdog heading into the third fight. For a fighter that was so close to winning the first two bouts, those odds appear to be a slap in the face at worst, and at best, motivation. “People can make bets and if they like to odds that is fine with me. It has nothing to do with my fight,” Marquez says dismissively. “I have to go into the fight with the mentality that I have to win each round and if the opportunity comes I go for the knockout. I am not going to hesitate if the opportunity is there.”

And what a shocker that would be. The perfect foil to any hopes of a Mayweather vs. Pacquiao superfight can be spoiled if Marquez’ brilliant counterpunching plants the Filipino on the canvas. There’s only one problem though, after three fights, Pacquiao and Marquez would be 1-1-1. Does that mean there would be a fourth fight? We’ll just have to wait and see.