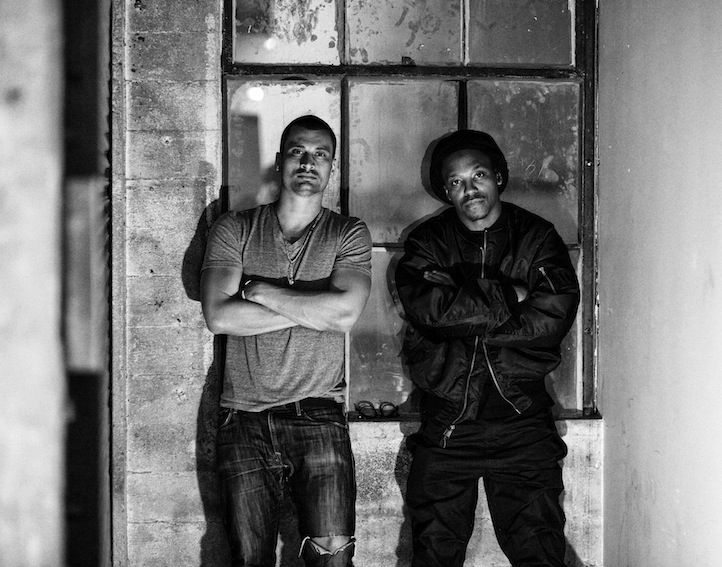 After debuting the “Letting Go Remix” last week off their upcoming Don’t Drop The Flag EP, Life+Times caught up with collaborators Lupe Fiasco and Sky Gellatly to discuss the their new project, its purpose and giving back.

SKY: Above all, Lupe and I are friends. We both have always had a respect for creative culture and for doing what we can to motivate and support the next generation of creative minds. Being a role model in just words, is different than being a role model in words and action. As friends, about a year and a half ago, we discovered that we both had a passion for electronic music. Well, a serious addiction, actually. And then, like real friends, we just said, “Hey, let’s start DJing together.” And we just stuck to our promise as friends, in and out of Lupe touring, and me with several other jobs. It’s just been genuine and fun from the start.

LUPE FIASCO: After conceptualizing “The Soundclash,” literally two sides of sound or musical tastes coming together (read: Sky and I), we were dedicated to leveraging our project as a way to positively influence culture. We knew that we had to make our own music to add to the canon, and we wanted to stand for philanthropy in a big way. Go big or go home.

SKY: Over lunch one day, we both decided that we should create our own dance album, and also man up and donate ALL of the album profits as a way to raise money for kids. We would have appreciated it as kids. We would have been motivated as kids to be philanthropic if guys we looked up to showed us that it was cool and easy to do. So, we really were just like ‘why not’? Doing good shouldn’t be such a hard decision to make. It’s like telling the truth–it’s the most right thing to say always. Even if, sometimes, it’s not the easiest.

LUPE FIASCO: Ultimately, when you’ve decided to do something that is rooted in helping kids in need, being creative takes on a whole new gravity. So from day one in creating our EP, we’ve said that we’re making music for others: for others to dance to, for others to have fun with and play in their DJ sets, and for others to receive support from–through our donation of all of our album sales. The EP’s title, Don’t Drop The Flag, is a manifestation of our dedication to supporting the next generation of creative thinkers. The flag we wave, is one that we have to stand for, hold onto, and pass on in due time. And truthfully, if we aren’t laying a positive example for the next generation in a hyperbolic way, we really have no right to even flying a flag today at all. Kids today don’t need anymore hollow heros.

SKY: We both had childhoods that were heavily influenced by creative mentors – whether they were teachers or family members. And now that we’re adults, it is our obligation to put our money where our mouths are, and give back to continue powering the engine of creativity and education for kids. It’s just like DJing. Sure, you can play an amazing set solely of other artists’ music. But, when you also create songs that you can play alongside those of others, and that others can play too, you’ve helping to push and influence culture – not just tread water in the creative endeavors of others. Ultimately, it’s the duty of guys like us to at least try and create a tomorrow for kids in need. Kids today need a few more positive role models who are doing good, while having fun at the same time.

LUPE FIASCO: We chose to release the of remix “Letting Go” off Lasers as our first song, for a variety of reasons. More than anything, the song’s lyrics speak to a need for our generation to take life by the horns, and just take the lead. There’s so much apathy and complacency in the world. And we wanted to translate that message into an emotive call to action. Let go of what’s holding you back, take control, and manifest your dreams. The song is a perfect kick off to our philanthropic pledge that we’ve tied to our EP. DJ Kue was an amazing partner to work with. With his collaborative talents, we created a track that has powered this message of youth revolution, and made it even more powerful than the original.