17-year-old Raury is an old soul. The young ATLien spent half of his interview with Life+Times inquiring about the life of the interviewer. He was genuinely interested in other people’s lives, their career paths and how they found their way to him. Raury is a self-proclaimed “Indigo Child” (like the title of his upcoming EP) a youth of the world who grew up in the Digital Era, highly advanced thanks to the internet and experiencing life at a lightening pace. That doesn’t stop the artist from being human. His buzz single “God’s Whisper” is a spoken word-meets-rhyming cut that brings a diverse angle to music in its manifesto approach to demanding more from society. Raury is a product of what’s called the C5 Music Foundation, a Coca-Cola sponsored camp for kids that provides them with empowerment workshops at a young age. And empowered he is. He’s already on hip-hop’s radar, gearing for the release of his Indigo Child EP while participating in an “Anti-Tour,” where he brings a flatbed to someone else’s concert parking lot and does a guerilla-style performance in an effort to “steal” that other artist’s fans. Check the mini-documentary premiere here for the evidence. It’s a brilliant approach for a kid who has mastered himself, his music, and his soon-to-be audience. We checked in with the wunderkind to discuss his current fame and where he plans to go with his new notoriety.

Life+Times: So everybody is definitely feeling you right about now…
Raury: [laughs] I want them to become Raury fans. This is only the beginning.

L+T: Tell us about yourself. Your success –
Raury: [interjects] Came out of nowhere?

L+T: [laughs] Exactly.
Raury: One thing about me is that I am a perfectionist. I want to release the best music, the most genuine music to my fans. And the thing about that is I will wait as long as it takes and work as hard as I have to…to get that done. A lot of people think I’ve just popped up out of nowhere, but literally I’ve been working on songs like “God’s Whisper” and other tracks off Indigo Child since I was 15. I’m about to be 18 in a couple of months. Ever since I had gotten started, we’ve been putting a lot of work and planning – getting the logistics right before we began this rollout. We treated it like we had one shot. So we put our all into it. We put money into studio time, but then we started over with it because I thought I could make better music. I was right, and here we are. I’m an adventurist. I’ve got a lot of drive, I wanna see the world. I wanna better the world. So that’s kind of why the reason I make the music I make. That’s what I aim to do with my music in the long run. I want to present that message in a cool ass way to the people so they fuck with it. 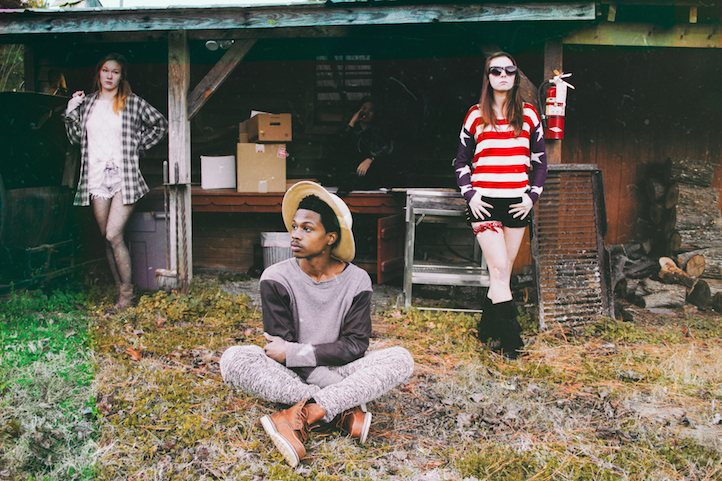 L+T: That’s quite a mission for a 17-year-old to take on…
Raury: Yeah, but that’s what I want to do in the long run: make the world a better place. That’s where my heart lies, honestly.

L+T: You said you started writing Indigo Child at 15, but when did you start rapping?
Raury: I started rapping when I was eight, but I wrote my first song when I was three. I didn’t even know what I was doing. I’ve always been musically inclined, but I never took it seriously. I didn’t realize that this was what I wanted to do with the rest of my life until I was like 14. Growing up, I always had my mind on the future. I was always focused. It started off immature with “I wanna be rich. I wanna get all the girls. Let me think about what I can have right now so I can get all of that.” I was nine years old thinking about those things. I was with my friend, and we’d be surfing the internet learning all kinds of shit like, “This is how you get into college” or “You can get into college easier if you play a sport” or “You could get a scholarship.” Like by 7th grade, we knew all about that. So by the time I was like in 10th grade, and I was writing shit like “God’s Whisper” about how school was bullshit. Because I formulated my own opinion about how college is a fuckin’ business, I didn’t want to do that. It helped me figure that shit out early.

L+T: You seem to have a really old soul.
Raury: A lot of Indigo Children tend to have old souls [laughs]. I credit a lot of my experiences to this camp I used to go to called the C5 Music Foundation. When you’re in the 7th grade and the school sees like a leadership potential in you, they recommend you for this thing in Georgia called C5, it’s like a leadership camp. You go out over months, and they teach you a lot of things about life and put you in a bunch of situations about how to work together and use teamwork. It would get more and more intense every year. It was a bunch of cool shit that inspired me and helped me grow up. By age 12, I knew how to work with large groups of children to get shit done. Plus, thanks to the internet, I grew up with everything in my face presented in an unbiased manner to the point where I can develop an unbiased opinion that yeah, people are different. There are different races, genders, and sexualities. It’s no surprise to me, I’m not afraid of it. I know what an interview is, I know how to conduct myself and stuff like that.

L+T: Yeah, a lot of artists in your age bracket can be total jackasses.
Raury: Oh but I’m a still a jackass though [laughs]. That’s the thing! If you get to know me though, you’ll learn I’m an immature asshole [laughs]. Nah I know what you’re sayin’ though. A lot of artists try to be cool, mysterious, and it’s not them. But they don’t know that [laughs]. 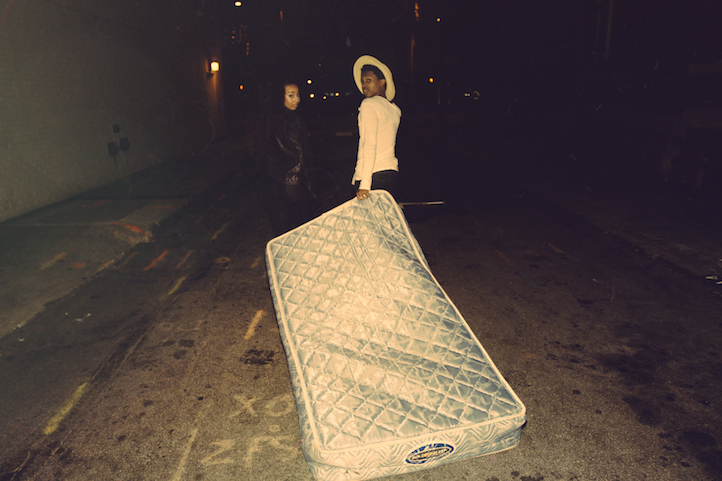 L+T: So how do you define an “Indigo Child”?
Raury: An “Indigo Child” is the youth of my generation who have an edge in life thanks to growing up in the Internet Age. Because of that, we are more inclined to have a great job or a sense of direction about where we’re going in our lives earlier on. So we may appear to be like people who can’t be told what to do. We learned about things before our parents taught it to us. It might be perceived as rebellious, but there’s a brighter side to it. Like me. Some people might be inclined to be highly successful – which is my case – or some people can go down the wrong road and do fucked up shit. That’s why in “God’s Whisper” you see people who pop pills and snort cocaine. That’s a part of it too, people go down the wrong road with all of this information. But some people do the right thing.

L+T: What were you like as a kid?
Raury: Man, me and my friends were badass kids [laughs]. We listened to a lot of Tupac growing up. We’d do all types of random shit. We were looking for trouble.

L+T: Tupac? Really?
Raury: Yeah man. I don’t know what was up with my mom, but she was blastin’ Tupac while was growing up. It wasn’t censored either [laughs]. That’s the main person I remember hearing at like four or five. Before I learned to read, I remember listening to Tupac.

L+T: What about as you got older? Who did you listen to?
Raury: A lot of cool ass folk inspirations like Jeffrey Lewis. Bon Iver, Manchester Orchestra, Bloc Party. Cool shit like that. I would eavesdrop on my big brother who wouldn’t let me in his room. He’d play “white” music because he thought I wouldn’t want to go in his room [laughs]. He would play System Of a Down and Red Hot Chili Peppers. That shit was hot. Then people would say I listened to “white” music, which is like the dumbest shit ever. Music is music! My mom would play Sade and Anita Baker in the car too. I loved that.

L+T: That explains why your music doesn’t sound like anyone else’s. You were like, bumpin’ Gucci.
Raury: But I was though! My brother and I used to have cyphers. He’d kick my ass though. He’s ten years older than me.

L+T: So Bon Iver, Sade, and Gucci Mane? The holy trinity, huh.
Raury: [laughs] Yeah! I need that on a shirt.

L+T: You can have that idea. My gift to you.
Raury: Thank you, thank you. 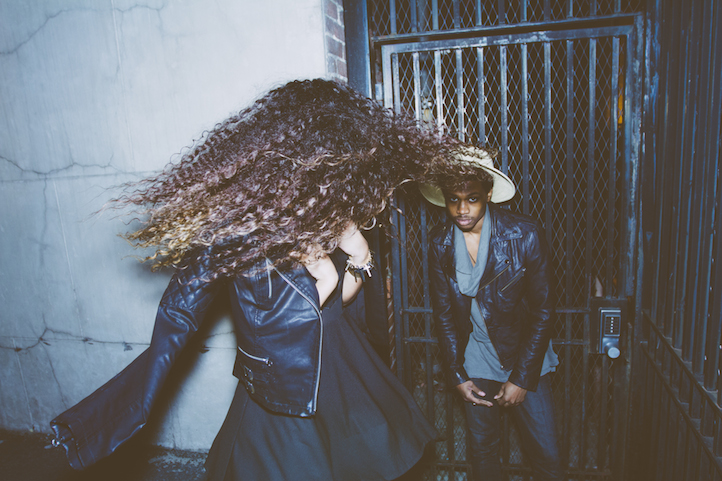 L+T: So tell me about this “Anti-Tour.”
Raury: Oh my god. It’s pretty much me, popping up in random venues or concerts of other artists’ whose music I’m a fan of and think my music would appeal to their fans. So pretty much it’s an unauthorized thing, where I pull up in a ten-foot truck tagged with spraypaint and decals in the parking lot within the vicinity of the venue and catch the waiting lines. Then we just go the fuck off and perform. We did a little test drive. I didn’t even know what to expect. For the first run, we pulled up to the Tabernacle for the Odd Future concert. I tell you, I’m usually so nervous. Three months ago, I didn’t know how I was going to perform in front of people. Now though? I can tell it’s gonna be my favorite part. But back to the story. We get there in the midst of a sea of people. I’m in the truck, they don’t know who I am but they wanna know what’s about to happen. Some people recognize my logo from the video so they’re hyped. Some are my friends. Then I get up there and go into my zone. I had butterflies, but then they were all gone. But before I even got to my lyrics, the cops shut it down. Before I even got to “I won’t compromise…”

L+T: Ugh, so corny of the cops.
Raury: Yeah man, but we have a whole team of cameras to document the whole experience. That’s the cool thing about it. I’m not even too mad about it. That night was a very progressive and productive night for me. I got the most legendary photo ever. Some kids were like, “That was so ballsy! Where can I hear your music?” The message got across, so I still got to steal some of Tyler’s fans [laughs]. So that’s all that matters.