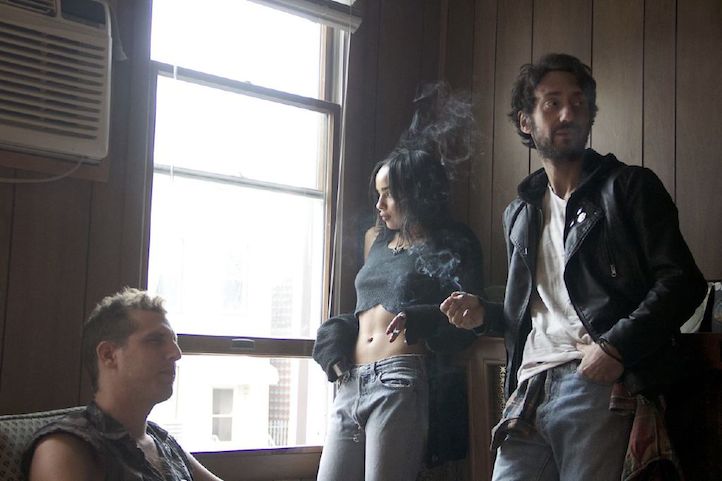 As the only child of an iconic celebrity pair, one could easily rely on the results of nepotism. And as a member of an already-successful band, one could comfortably rest on their laurels. Luckily for listeners, however, the bandmates of Lolawolf have done neither. Comprised of Zoë Kravitz (daughter of, yes, musician Lenny Kravitz and actress Lisa Bonet) along with James Levy and Jimmy Giannopoulos (of fellow band Reputante), the newly-formed hybrid band Lolawolf isn’t haphazardly or half-assedly making music. Despite having only been together a few months, the trio’s already developed a signature sound that’s refreshingly sincere without being syrupy; catchy without being corny.

Over the men’s created mixture of ‘80s-inspired synths, thumping drum patterns, and driving bass lines, Kravitz purrs clever and complicated lyrics about love (“I’d put you in chains if I could change you”) and sex (“I could stare out your window and fuck you tonight”) and drugs (“I promise not to break down after my second line”) and, well, more love (“You and me and she are history”). She’s every bit the minx while performing, too, playfully winking at and grabbing the cheeks of her bandmates while also showcasing an alluring if not delightfully dichotomous appeal; like when she wasn’t making requests for whiskey, she was leading the crowd in a “If You’re Happy and You Know It” chant. Life+Times caught up with the band post-show to talk their upcoming self-titled EP (out today).

Life+Times: Firstly, for those who aren’t familiar and so we don’t get confused, can you tell us the difference between Reputante and Lolawolf?
JAMES: Reputante sounds like, well, because we play in both bands, it’s the same sort of tone, but Reputante is what I want to say and Lolawolf is what Zoë wants to say.
JIMMY: Lolawolf has more R&B influences. The production of the newer stuff has more of a hip-hop vibe and Reputante is more new-wavey, maybe.

L+T: Zoë, you were the only woman in your last band, Elevator Fight, too. Do you ever find yourself wishing to be around more estrogen?
ZOË: No, dude! I like it.

L+T: You’re also the only one featured in the “What Love Is” video. Are you happy with being the face of the group?
ZOË: I’d like them to get more involved in videos and stuff like that. But, they’re dudes; they don’t really care. [Laughs]

L+T: Has your acting career helped you in becoming more comfortable with being a frontwoman?
ZOË: Yeah, when it comes to being in front of people and in front of the camera, I think it has a lot. There’s something about music that feels really vulnerable. It’s different in that way. I still get super, super nervous.

L+T: How have the differences in your personalities helped or hurt when making music?
JIMMY: Everyone plays to the ego of the song, instead of their own. It’s like, ‘What would make this part better?’ And then no one’s offended if there’s no vocals there or if it’s just minimal, like there’s no bass line. No one cares. It’s just, ‘What’s gonna make the song better?’ It’s the same goal. Zoë pretty much hears stuff and starts writing off the bat. And sometimes we’ll get excited and be like, “Oh, it’d be cool if you said this!” Me and James just kinda sit around and make the music. I start with a beat and then James’ chords progression and everyone jumps in on everything. It really is like a collective. It’s like powered by numbers, instead of separate things.

L+T: So, Zoë, since you’re the one that actually has to say these lyrics, do your parents get uncomfortable when it comes to lyrics about sex or drugs?
ZOË: No, because we talk about that stuff anyway. We’re all pretty open. And it’s not like I’m 16. I’m not, like, Miley Cyrus.

L+T: So, which songs are your favorite and which were the hardest to write?
ZOË: I love “Drive.” I think that’s a great song. It’s the first one we wrote and that was really easy to write. They were all pretty easy to write, they all came out really simply and naturally.
James: If it was hard at any point, we just moved on.
ZOË: James loves “Chainz.”

L+T: You guys are signed to an independent label, Innit Recordings, but are you satisfied with the state of mainstream music?
ZOË: That’s a great question. Are we satisfied with the state of mainstream music? We’re all kind of on the same page with that right now. We all think hip-hop is in a really fucking cool place right now, which is cool for me because I listened to hip-hop a little bit when I was younger—in the late ‘90s-early 2000s when hip-hop was still kinda mainstream—and then it kind of…I don’t know what happened. I hadn’t listened to hip-hop in a long time and now it’s all this new music with A$AP Rocky and Tyler, The Creator and Kendrick Lamar and Earl Sweatshirt; all those guys are doing such cool shit and it’s really exciting for me because I’m getting into that kind of music again. But, a lot of pop electronic music leaves me wondering what’s going on but, you know, that’s okay.

L+T: Is the band’s goal to go mainstream though?
ZOË: We don’t really have a goal. We’ve only been together for, like, less than a year, so the fact that people even know our music is cool.

L+T: Is there one song, genre or musical trend you’ve had enough of?
ZOË: Probably those bodega pop songs that you can’t listen to anymore, that you hear in, like, a deli. I don’t know! That’s a good question. We can’t think of anything right now. If we don’t wanna listen to something, we just turn it off.

L+T: You’ve established yourself as a pretty eclectic music listener. Is there any artist your fans would be surprised to learn you listen to?
ZOË: Oh, that’s a good question. I actually don’t because I think everything kind of comes out in the music. I mean, you went to the show, you heard all the new songs that we played. It’s like some weird combination of ‘80s pop, dance music, and then hip-hop beats with ‘90s R&B. It’s everything coming together in some weird way.

L+T: True, you had these synth-pop songs that wouldn’t have sounded out of place in a John Hughes movie and then these songs with tribal drums that sounded like a mating call. You guys even performed a song that reminded me of Ginuwine’s “Pony.”
ZOË: That makes me so happy! That makes me the most happy person! Was it the last one we sang? That was “Take a Hint.”

L+T: At the show, your manager told me you guys pretty much performed two different albums. Can you explain that further?
ZOË: Yeah, that’s exactly what we did! The first EP that’s about to come out we did last summer and then, at the beginning of this year, we went to the Bahamas and did a second EP and we were totally influenced by being in that tropical environment and that’s what happened. And we combined them for the show.

L+T: Wait—going back—so no guilty pleasures?
ZOË: I’m gonna have to say I really think Miley Cyrus’ two singles were on fire. I’m not even gonna lie. Dude, I was totally on the subway covering my eyes hoping no one saw that I was listening to—what’s that song—“We don’t stop…” I was totally getting down to it. I’m not gonna lie.

L+T: Which artist’s career do you most admire?
Jimmy: I like James Murphy.
ZOË: I knew you were gonna say that. James Murphy, LCD Soundsystem.
Jimmy: Because I feel like he started later, in his thirties. He kind of spent his twenties figuring out his thing and then it seems like when he had a good grip on what he wanted to say, he did it and it developed very naturally. And he did it on his own terms. He started his own label. He was involved in all the production and engineering. And he called it quits when it was time. He did it for 10 years and they made an amazing third record and then he said, ‘We’re gonna stop here, I’m 40 years old, I’m just gonna move on.’ Their last show was at Madison Square Garden. They could’ve kept milking it, but he decided that there was an expiration date. And he did it on his own terms. And the great thing about James Murphy and LCD is that they didn’t necessarily say, ‘We’re never gonna play again.’ They just said, ‘Listen, we’re finishing; if we decide to play again, we’ll play, but it’s not gonna be one of those things.’ It wasn’t a money thing. They did shows at Terminal 5 in New York City for their fans, something like five shows, a bunch of shows in a row, and then they added MSG at the end so everyone could go. And they made it a big party and they worked their asses off. I mean, I went to some of the shows, and they just looked exhausted. They played long sets and they did it…it was all for the fans.

L+T: So, “if these three ‘blanks’ has a baby, it would be Lolawolf.” And you have to pick a person, place, and thing.
ZOË: If—God—ok, wait, had a baby? So, if New York City…and…and…if New York City…what’s a thing? Like, a bottle of whiskey? Phil Collins. And like…a nice-sized coffee?

L+T: Wait, is it a spiked coffee with whiskey in it?
ZOË: You can put Phil Collins in the coffee! [Laughs]

L+T: So, if there was a Lolawolf yearbook, what would each of your superlatives be?
JIMMY: I don’t know! You can ask James that!
JAMES: Jimmy has the Best Ears. Zoë has the Best Smile. I definitely have the Best Attitude. [Laughs] I don’t know if that’s true. I would like that. I mean, I’m definitely the Most Handsome.
ZOË: Jimmy would be Most Likely to Succeed. James would be Most Popular. And I would be Class Clown.

L+T: Are Jimmy and James gonna be in it?
ZOË: Oh, fuck yeah! I’m gonna make them be in it. And we’re playing a bunch of shows next week in New York which is gonna be fun. And then our second EP will come out in a month.

L+T: Will there be a full-length LP?
ZOË: I’m sure we will. It’s gonna happen for sure.

L+T: An official single?
ZOË: I don’t know! We don’t know which one.

L+T: Take a vote with your fans.
ZOË: All eight of our fans. [Laughs]