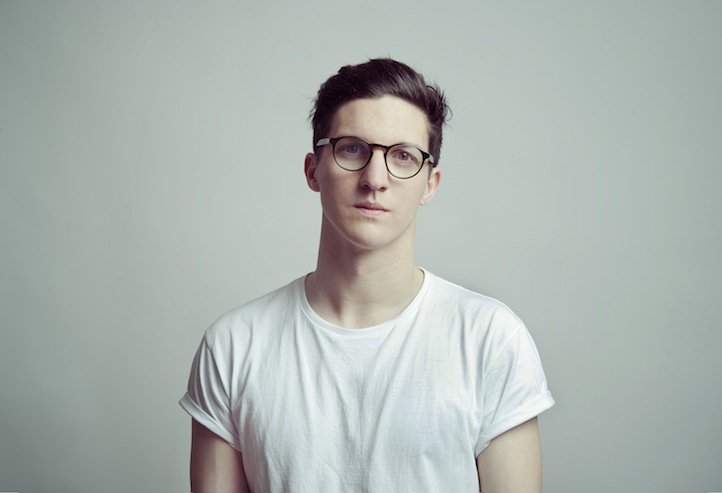 What do Kendrick Lamar, Paul McCartney, and England have in common? British crooner and multi-instrumentalist (drums/guitar/piano), Dan Croll. At the age of 18, he attended the Liverpool Institute for Performing Arts (LIPA), funded by Paul McCartney. Croll’s heavily drum centered music has an equally powerful punch of seductive acoustic guitar riffs with a whisper of delicate piano chords. Drum lead rhythms incorporated on his debut EP, From Nowhere, is influenced by his keen love of Afro-beat and hip-hop. Croll cites Kendrick Lamar as a key artist he’d want to partner with on a future track. “I’m a big fan of his album. [It] tells a narrative,” he states. Life + Times caught up with Croll to discuss his past, present, and future.

Life + Times: When you were 18, you went to a specialized art school. What did you study there?
Dan Croll: I went to Liverpool Institute of Performing Arts, well known for being settled by Paul McCartney. He funds the school. It has about 2,500 applicants, but only about 20 spaces or 25 spaces. So, I was pretty lucky to get into that. The course is called a Music B.A. Honors. It covered everything from music laws to music management to music promotion to recording your own stuff. So, yeah, it covered all aspects of the music industry really.

L+T: Were you already songwriting before you even attended the school?
DC: Yeah, in a way. I did get in for my songwriting, but I hadn’t before then. I only started songwriting when I was 16 [or] 17. I had a bit of a career change last minute. I was going to be a rugby player. (Laughs) Look at me! I was a serious rugby player. I was playing pretty high level – I had a few England spectators. Then at 17, I badly broke my leg. That ended my career in rugby. I always played a bit of music, so it’s kind of like music was my fall back. It wasn’t until I broke my leg that I realized how much I love music and I wanted to pursue it.

L+T: It took a broken leg for you to realize your calling! That’s amazing. Revisiting the school subject, you were actually able to have a one on one with Paul McCartney, right?
DC: The man himself!

L+T: How was that? Was that an intense experience?
DC: It was great! Because I know it’s funded by Paul McCartney – there was always talk of him coming in and giving classes – I was almost mentally prepared for it. So when I saw him, I was excited; but I wasn’t like, “Oh my god!” I’ve met other artists, obviously not as big as Paul McCartney, but it was like, I was not able to speak to them. It was a bit of a surprise. Whereas, I was ready for Paul McCartney.

L+T: Based off of your music style, I gathered that you have a diverse taste in music. Tell me about some artists you’d like to collaborate with on a future EP or album.
DC: There are a lot of great artists out there. I would love to work with a few people that I feel are similar to me. Maybe combine Afro-beat music with elements of hip hop and reggae in there as well. I really like to mix a lot of genres. I suppose people like tUnE-yArDs, Vampire Weekend, and maybe someone like Kendrick Lamar as well.

L+T: What projects are you working on now and in the future?
DC: We’ve just released the five-track EP. That’s the main thing for America. That’s what we’re pushing. Back in the UK, I just released another single, a second single, which is also on the American EP. [It’s] called “Compliment Your Soul.” I guess I’m just going to see how well this goes down. So far, it’s been really well. I’m so overwhelmed by the support in America and the gigs so far. My first visit, my first tour, nearly all of them sold out. So, we’ve already booked another visit in June. There’s a lot of focus over here. I guess, [I’ll] keep gigging and eventually an album.

L+T: Formation of lyrics or melody – which one comes first in your songwriting?
DC: I go for the melody first. Lyrics are the last thing I do. I think throughout the process I kind of got an idea of what the lyrics might be about or a certain word might just stick with me. For me, it’s really important to get a really solid groove. All of my music is very drum lead groove. I like to experiment with different grooves. I think that comes from listening to different hip hop music. It’s important that you have that strong underlying groove. Then, I work on the melodies and the lyrics come last. It doesn’t always work like that. Sometimes [there are] exceptions, but its groove and melody lead.

L+T: The melody definitely has to match the lyrics because of the emotion behind it.
DC: Definitely! A lot of people that I studied with would carry around lyric books constantly and be writing these really deep lyrics. It made me feel bad like, “Should I be writing lyrics? Am I doing something wrong?” Everyone works differently; you just got to find your way of working.

L+T: Tell me about the band you work with you’re on tour.
DC: Jacob (keys), John (bass), and Jethro (guitar) – we all studied together. So, I’ve known those guys for like four or five years. We’ve played in different bands together. Everyone’s got a different side to them. We love heavy music, like metal. Me and John used to play in a math rock band back in the UK. I like all genres of music. I listen to everything and anything. Beanie (drums) is relatively new. My other drummer went on to play for a Scandinavian artist. I’ve only known Beanie for six months, but I’ve actually known his sister for three years. I didn’t even know she had a brother. When I was like, “Oh my god, I really need a drummer! We’re going to America in a couple of months. There’s a lot of work to be done.” She said, “My brother’s great.” I was like, “You’ve got a brother?” They are all really great musicians. Everyone sings, which is a big thing. The live shows are quite harmony lead.

L+T: Are they fully invested and they participate in the whole music creation too?
DC: The process in which I record and write is so many layers. I play all of the instruments on the recording. I layer. It’s impossible to have 15 guitars on stage like the recording would be. We’ve all had to adapt and I’ve had to find members that can be multi-instrumental. So, it’s very important that all the guys sing.