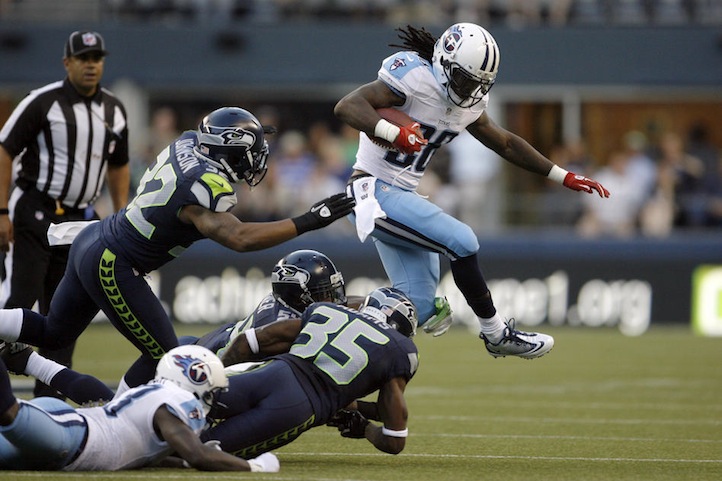 The NFL replacement refs are beginning to lose control of games. Players know. Coaches know. And after Week 2’s debacle, league commissioner Rodger Goodell is fully aware of it, too.

If you tuned into Monday Night Football for the Denver Broncos and Atlanta Falcons game, you saw the train wreck performance the replacement officials put on at the end of Week 2. The first-quarter lasted an hour. There were three calls overturned on replay in the first half. Peyton Manning pleaded with the backups refs several times. There was a phantom pass interference call on Broncos’ cornerback Tony Carter. And there were 18 combined penalties and one six-minute brawl that was a direct hit to the shield the NFL wants so badly to protect. It was pandemonium. There was pushing and shoving. Falcons defensive end Ray Edwards bumped substitute ref Ken Roan. Edwards was the only player or coached flagged –he was called for unnecessary roughness– after half of Denver’s bench was on the field. He should have been ejected for making contact with an official.

It was an embarrassing moment for the league and Goodell, who stated mission since becoming commissioner has been to protect the league’s image and value player safety. Thus far, he has earned his hefty paycheck, paying close attention to personal conduct, player safety and concussion awareness. But what transpired inside the Georgia Dome, and across the NFL in Week 2, could damage commissioner Goodell’s legacy if not corrected immediately.

The league’s regular officials have been locked out since June, when their contract expired. Talks with the NFL Referees Association (NFLRA) broke down several times, forcing the league to use replacements for the first time since 2001. Since the backups took the field, there have been numerous trials and tribulations. Over the weekend, side judge Brian Stropolo was removed for two hours before the New Orleans Saints and Carolina Panthers Week 2 game, after being exposed by ESPN for being a rabid Saints fan, who has pictures posted on his facebook page clad in “Who Dat?” gear. If that deplorable situation wasn’t viewed as a black eye for the league, the knockout punch was delivered by Philadelphia Eagles running back LeSean McCoy told SportsRadio 94 WIP’s Anthony Gargano and Ike Reese in Philly on Monday, that a substitute official told him that he needed him for his fantasy football team.

The identity of the replacement official has yet to be revealed, or if there’s any truth to McCoy’s allegation, but even the appearance of this kind of impropriety is absolutely ridiculous. The NFL used to have a strict policy against any sort of wagering among its officials for this exact reason; nobody wants the specter of corruption to threaten the league’s shield. Nobody wants an NFL version of the NBA’s Tim Donaghy scandal. McCoy jokingly said this comment –laughing in the moment– but he was dead serious when describing an in game scenario, where after a bad call by a replacement official, Ravens linebacker Ray Lewis apparently punked him so much that the ref was visibly shaken.

“During the game, they made like a bad call or something, the ref, and I see Ray Lewis pump his chest up, trying to scare him. Don’t you know [the ref] started stuttering? I’m like, ‘what’s this?!’”

The NFL pays its referees to be enforcers that will impose the rulebook. However, that’s just part of the gig. Goodell pays his refs not to be intimidated by Ray Lewis or any coach. The real officials took the oath to uphold the laws of the league’s shield. These replacement referees –who mostly come from low-level collegiate leagues, high school and the Lingerie Football League– have not been proving a full understanding of the rules they’re suppose to enforce.

According to USA TODAY Sports, gambling experts from sports-book operators to university professors say the NFL’s replacement referee saga has produced an environment ripe for corruption. Replacement officials who ref on a game-by-game basis have more incentive to throw a game for cash. NFL spokesman Greg Aiello told USA TODAY Sports, that the league does “comprehensive” background checks on all officials, and they’re subject to “random, unannounced” drug testing. Yet, according to a Yahoo! Sports report, the NFL’s vetting process didn’t stop them from hiring replacement official Shannon Eastin, who was a contestant in the 2007 World Series of Poker.

If the NFL and its veteran officials can’t come to an agreement on a fair and equitable new collective bargaining agreement, the players’ safety will continue to be in jeopardy and fans will be left with shaky calls. The real referees aren’t saints, but at this point, they can be viewed as saviors of the shield.